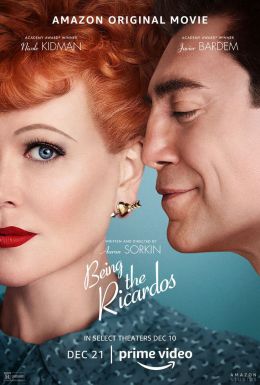 Movie:   BEING THE RICARDOS

Jeanne: Using a surprising --- at least for David and me --- piece of information that one Sunday evening as he was signing off from his weekly radio show, gossip monger Walter Winchell accused Lucille Ball of being a communist, writer/director Aaron Sorkin has penned a fascinating look at one week of production for the much-loved television sitcom “I Love Lucy”. BEING THE RICARDOS isn’t a biopic of the show’s stars, Ball and Desi Arnaz, but rather a peek behind the scenes of their relationship and the paramount efforts to make a hit comedy in the 1950s.

Much has been opined about casting Nicole Kidman as Lucille Ball, but she has put all of that malarkey to bed with her impeccable performance as the power behind the stunning success of “I Love Lucy”. What began as a popular radio comedy, “My Favorite Husband”, offered Ball the opportunity to adapt for television. Her one condition --- husband Desi Arnaz (Javier Bardem) would play Ricky Ricardo, her TV spouse.

Together these two built an empire, but all Lucy really wanted was a “home”, something her childhood never provided. By insisting Desi play Ricky, she envisioned that real home life because he would no longer be touring with his orchestra. Unfortunately, things didn’t turn out the way she planned. Not only did she have to deal with the hefty political accusation, but there were photos circulating of Desi with other women.

Sorkin’s writing once again proves his mastery at telling a story. Not only do we get to witness Ball wield her power in her own inimitable way, which was astounding for a woman in the 50s, we are also privy to her machinations to save her marriage.

One of her confidantes, William Frawley (J.K. Simmons), played the curmudgeon Fred Mertz on “I Love Lucy”. A heavy drinker and long-time veteran of vaudeville, Frawley provides sage advice to Lucy during some of her most difficult times. His wife, Ethel, on the sitcom is played by Vivian Vance (Nina Arianda), Lucy’s best friend. Frawley and Vance despise each other, but they always have Lucy’s best interests at heart.

Not only was Lucy formidable, she was also diabolical. At one point, Vance decides to lose weight. Lucy has a multiple course breakfast, including pancakes, sent to her dressing room one morning. Vance wasn’t thrilled about being paired with Frawley, whom she considered too old for her --- she was only two years older than Lucy. But Lucy didn’t want Vance looking too thin or too glamorous, so weight loss was off the table.

In her efforts to keep Desi from straying, Lucy enlists the assistance of her producer and head writer for “I Love Lucy”, Jess Oppenheimer (Tony Hale). He and the writing team of Madelyn Pugh (Alia Shawkat) and Bob Carroll, Jr. (Jake Lacy) were responsible for the creation of every show. Pugh, one of the first female writers, pushed Lucy to be more progressive instead of playing a submissive wife. 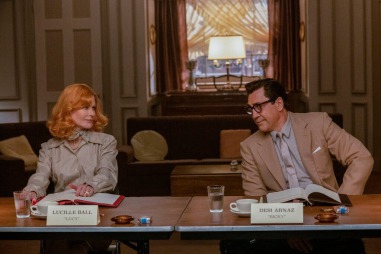 It was a long week in the life of Lucy, Desi, their staff and crew after the Winchell story broke. They were facing the end of the show --- and possibly the end of their careers. Obviously, all of what Sorkin includes didn’t happen in just that one week, but his brilliant screenplay gives us a taste of what’s involved in keeping a hit series going.

To dispel any doubts, Kidman is marvelous. Her preparation is meticulous. She learns to speak in a deeper voice like Ball’s, then changes to a higher tone to match Lucy Ricardo’s. Her mannerisms and hand gestures are well researched --- it’s uncanny. Lucille Ball was tall, thin --- and beautiful. Kidman in her various red wigs couldn’t be more perfect.

Bardem is as sexy as Arnaz, though he had to learn to sing like him and play the conga. He pestered producer Todd Black for years to play Desi once he found out Black had secured the rights from Lucy and Desi’s children. He’s quite perfect for the role.

Sorkin and his crew have a sterling reputation for attention to detail. The costumes by Susan Lyall and production designs by Jon Hutman are precise. The clothing for the “I Love Lucy” scenes are total replicas, and the sets are the same --- down to the exact wallpaper from the show.

Whether or not you’re a fan of Lucille Ball and Desi Arnaz --- and all they accomplished --- BEING THE RICARDOS is an homage to the hard work --- and heartbreak --- these two pioneers endured. 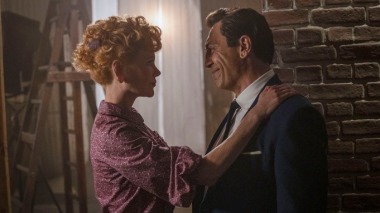 David: Horrors! Imagine using the word “pregnant” on network television! That was the admonition TV executives stood by in the medium’s early years lest they lose a key sponsor.

In writer/director Aaron Sorkin’s latest genius effort, BEING THE RICARDOS, he gives us a unique look behind the scenes during a production week of “I Love Lucy”. Lucille Ball (Nicole Kidman) and Desi Arnaz (Javier Bardem) spar with each other and their bosses. No, things aren’t nearly as chummy as a national TV audience might assume.

In Sorkin’s deft hands, BEING THE RICARDOS is hugely entertaining. The film does manage to capture one of Lucy’s funnier escapades, namely the stomping of grapes in her bare feet. One memorable episode we do not see is Lucy and Ethel frantically working the conveyor belt at a chocolate factory.

Sorkin was actively courted to direct by producer Todd Black for many months. One critical aspect for Sorkin were the historical records of the show and its stars, including the accusations that Lucy was a communist. Not known as a film director, Sorkin had actually completed filming THE TRIAL OF THE CHICAGO 7 before committing to direct this movie, avowing that CHICAGO 7 gave him the confidence that he could actually direct a feature length movie. 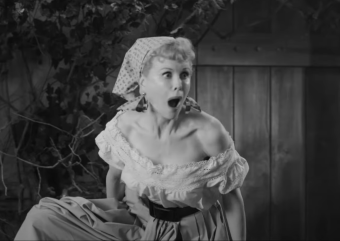 With her portrayal of Ball, Kidman likely has thrust herself into the already overcrowded mix of Best Actress candidates at the 2022 Academy Awards. Lucy and Desi’s children, Lucie and Desi Jr., are executive producers on this film and they should be thrilled with Kidman’s interpretation of their mother. Besides being beautiful and funny --- make that hilarious --- Kidman’s Lucy is smart, feisty and creative, taking no prisoners when she wants something done her way. Of interest is the fact that Black approached Lucie and Desi Jr. in 1995 but they chose not to sell the rights. Black persisted almost 20 years later, the duo finally said okay, and the result is BEING THE RICARDOS.

Bardem’s Desi is also magnetic on the screen, especially when he assumes Arnaz’s bandleader persona. His rather sketchy resemblance to the real Desi might be problematic for some (only on a small scale for myself). The same goes for the Ricardo’s almost-as-famous neighbors Fred and Ethel Mertz. If you’re old enough to have watched “I Love Lucy” in its heyday, or even just in reruns, there just is no replacing Fred and Ethel. J.K. Simmons and Nina Arianda do their best to impersonate William Frawley and Vivian Vance respectively, but it’s not the same. I doubt the current generation of moviegoers will care at all and Sorkin explains it this way: “I just wanted a suggestion of the person…this is a painting not a photograph.”

BEING THE RICARDOS has it all. A rare peek behind the production scenes of one of the most critically acclaimed sitcoms in TV history is fascinating. Black-and-white clips from the actual show never let us forget the brilliance of Lucille Ball. And the fact that a major company would pull its sponsorship over something as innocuous as the word “pregnant” demonstrates just how far we’ve come as a society --- at least in that respect.