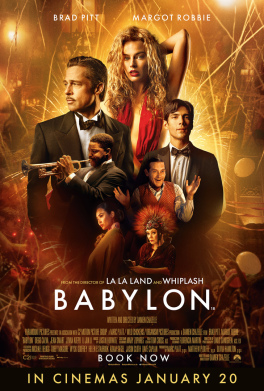 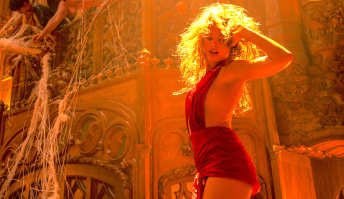 Jeanne: Fueled by a frenetic --- and absolutely FABULOUS --- soundtrack, Damien Chazelle’s latest homage to Los Angeles, BABYLON, is about as bizarre and unexpected as one can imagine. Beginning in 1926 and spanning more than several years, writer/director Chazelle explores the hedonism of the Roaring Twenties era in early Hollywood as the industry moves from silent pictures to the talkies.

Everything about BABYLON is over the top. From the dramatic and luscious set designs, magnificent costumes, incredible roadsters and outrageous party scenes, very little is left to the imagination. And at three hours and eight minutes, there is certainly more than enough to occupy the audience’s attention. All of this is the culmination of 15 years of research by Chazelle to replicate the no-hold-barred world which would eventually be tamed by the Production Code of the 30s.

Choosing to focus upon a few envisioned characters from the time period, Chazelle’s first casting choice was Margot Robbie to play Nellie LaRoy, an unknown actress who is determined to get discovered. Arriving at the outlandish party already in progress at the mansion belonging to studio mogul Don Wallach (Jeff Garlin), Nellie plows her borrowed car into a statue, then enlists the help of Manny Torres (Diego Calva), Wallach’s jack-of-all-trades and fellow dreamer, to get her into the party.

Also at the party is Jack Conrad (Brad Pitt), the current highest grossing leading man in Hollywood --- and the world. Every man wants to be his friend and every woman wants to sleep with him. Elinor St. John (Jean Smart), the famous gossip columnist, is also present, taking copious notes of the debauchery. Nothing gets past Elinor, so when Nellie performs her arresting dance amongst the throngs of naked revelers, she recognizes Nellie’s potential.

The spectacular party music is provided by a band of Black musicians, one of whom, a gifted trumpeter named Sidney Palmer (Jovan Adepo), becomes a star once movies include sound. Though his rise is meteoric, an injurious request down the road becomes his undoing.

Another such star, Lady Fay Zhu (Li Jun Li), known as the “Emerald of the East and the Ornament of the Orient”, manages to stop the party action when she performs the song “My Girl’s Pussy” in a top hat and tux. Despite her cheekiness, Lady Fay appears to be the only level-headed person in BABYLON, an aspect that will end up saving Nellie’s life at one point.

Chazelle’s story flits from one character to another, with tragedy always hanging in the balance. When Nellie’s gambling obsession gets out of hand and she runs up a tab to the tune of $85,000 at the casino owned by James McKay (Tobey Maguire), her fear is palpable, and she turns to Manny to save her. What should have been a simple payment drop becomes an odyssey through one of the most grotesque underworlds imaginable. 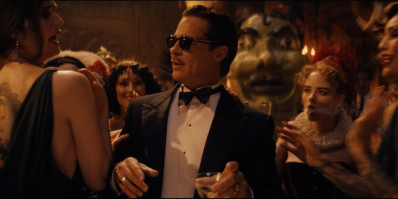 Though not every minute of BABYLON is enjoyable, it is a phenomenal effort by Chazelle and his cast and crew. It can definitely be regarded as a masterclass in acting, as everyone is at the top of their game. Robbie is especially illuminating --- and wild. It’s almost like she’s having an out-of-body experience portraying Nellie --- she’s incredible. The Hearst party scene, filmed at Busby Berkeley’s old mansion, is as fascinating as it is

Pitt comes off as truly old-world Hollywood. He has such a magnetic screen presence. And Calva is astonishing. It’s quite a performance for his first American film. But I would be remiss in not mentioning Li and Maguire. Her last scene with Pitt is so subtle and mesmerizing, she deserves an Oscar nom for Best Supporting Actress. And Maguire is utterly creepy and terrifying as McKay --- a role he really seems to relish.

To complete his vision for BABYLON, Chazelle turned to Production Designer Florencia Martin and his long-time collaborator, composer Justin Hurwitz. The sets, locations and music all needed to feel as realistic as possible, with the score pushing the limits of the era. The results are breathtaking --- the music especially is electrifying. It will make you want to get up and dance long after you’ve left the theater. And don’t be put off by the long run

time --- one of our standard complaints. BABYLON literally flies by. 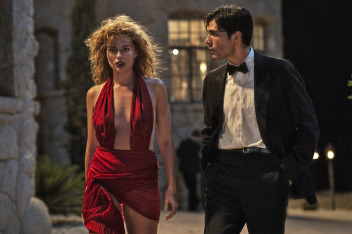 David: A lot of people might shy away from even thinking about spending three hours and eight minutes in a movie theater. Old timers will remember longer films from the past that at least included an intermission

Writer/director Damien Chazelle has completed his 15-year dream of showcasing the early days of Hollywood when Los Angeles was just a desert town in the early 1920s. It was a time when silent films were all anyone knew. His rather amazing take on this dream is called BABYLON starring Brad Pitt and Margot Robbie. The film does run three hours and eight minutes, but you wouldn’t know it. In a large crowd at our screening, you could hear a pin drop and no conversation was audible.

Chazelle instantly grabs our attention when Manny Torres (Diego Calva), an aspiring actor, hires a pickup truck and driver to transport an elephant to a movie mogul’s mansion. After the pachyderm is loaded into the back of the small pickup and the vehicle stalls going up a hill, what could possibly go wrong? The poor animal reacts to its situation, but you’ll have to see the movie.

There are too many other memorable images to mention in BABYLON that we cannot unsee. The film is essentially an exposé of the decadence and debauchery of the era. We witness the rise and ultimate fall of key characters as it traces the lives of celebrities like Jack Conrad (Pitt), the world’s most famous movie star. The sudden ascent of the unknown Nellie LaRoy (Robbie) is fascinating to see because of Robbie’s compelling performance of reckless abandon. She truly dances like no one is watching. It’s conceivable that she breaks through the crowded slate of potential Best Actress candidates.

Pitt epitomizes the suave, handsome, ultra-popular movie star of the time, or any other era for that matter, in cinema history. We would expect nothing less from an actor of his magnitude and he delivers with his usual flair and confidence. When talkies become the norm for the silver screen, Conrad is the most effected.

Calva is a 30-year-old Mexican actor generally unknown to American audiences. He provides some incredibly emotional moments as the handsome young outsider --- completely smitten with Nellie --- who does climb the ladder of established Hollywood protocols. It’s a strong performance that should catapult him into more starring roles in American films. 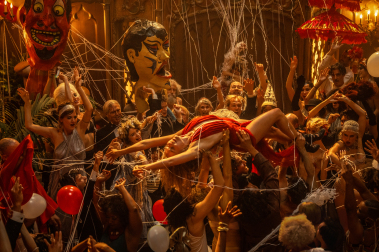 Other cast notables include Jean Smart as Elinor St. John, a Hollywood gossip columnist who can make or break a career a la writers like Louella Parsons, one of several real-life entities that inspired Smart’s turn. Li Jun Li portrays Lady Fay Zhu, a mysterious Asian beauty who manages to fit in with the Hollywood elite despite living above a laundromat. Jovan Adepo is compelling as Black trumpet player Sidney Palmer who feels the sting of racism.

Eric Roberts plays Nellie’s oddball father and sometime manager, while Chazelle’s real-life wife, Olivia Hamilton, portrays movie director Ruth Adler. Hamilton and Robbie are riveting as they attempt to complete one brief movie scene over and over where something always goes wrong. Lukas Haas is the enigmatic figure George Munn, a great friend and life influence for Conrad.

And then there is Tobey Maguire. The former SPIDERMAN star is an executive producer on BABYLON, but Maguire is memorable in his brief role here as the rather despicable casino owner James McKay. His bizarre makeup and manner are jolting.

BABYLON is as much a comedy as it is a drama. Chazelle’s original script included over 100 speaking parts. I haven’t even mentioned Olivia Wilde’s cameo as the soon-to-be ex-wife of Jack Conrad --- one of many laugh-out-loud moments in BABYLON.

Chazelle has liberally sprinkled his film with dozens of other characters that will not receive the accolades of established actors. However, collectively they help to provide a look at one of the most intriguing eras in the growth of an American industry. 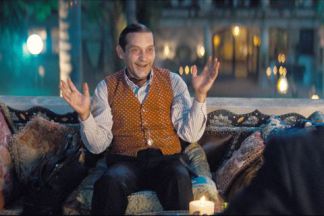