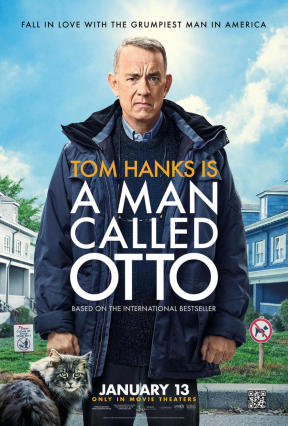 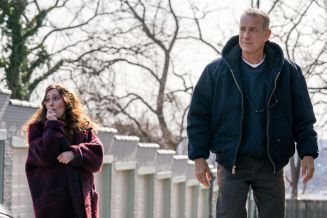 Jeanne: Tom Hanks is the perfect choice to play Otto Anderson in director Marc Forster’s adaptation A MAN CALLED OTTO based on the 2012 novel by Fredrik Backman entitled “A Man Called Ove”, which was made into the 2015 film of the same name by writer/director Hannes Holm. Moving the setting from Sweden to Pittsburgh, Pennsylvania, screenwriter David Magee has penned a moving tribute to all the curmudgeons in the world.

Otto is retiring. His lovely wife has recently passed away and he is preparing for a new phase for himself. But before he can make that happen, Otto is still obsessed with his daily “duties” around his small, quiet community. Once he finishes re-distributing the trash and the recyclables to their proper receptacles, he’s ready to proceed with his objective.

Just as he’s putting his plan into action, a loud disturbance in front of his townhome --- and a weak light fixture --- stops his progress. Investigating the commotion brings him face-to-face with his new neighbors, Marisol (Mariana Treviño), her husband, Tommy (Manuel Garcia-Rulfo), and their two daughters, Abbie (Alessandra Perez) and Luna (Christiana Montoya).

Otto is a stickler for rules --- and following them --- and right now, Marisol, who is pregnant, and her family are breaking a bunch of his established no-nos. After helping them park their moving trailer, Marisol insists upon giving Otto food for his dinner. Despite his best efforts, Marisol will not be denied, and Otto finds himself dining on Marisol’s Mexican cuisine.

As Marisol and Tommy settle in, she becomes more and more reliant upon Otto for help while Tommy is at work. She prevails upon Otto to teach her to drive and enlists him as a baby sitter. And little by little, Otto begins to reveal to Marisol how he became the man he is --- grumpy and unfriendly. 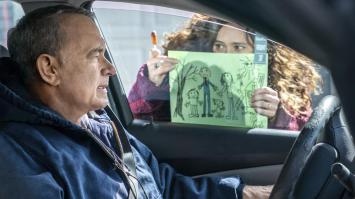 Much of this is accomplished via flashbacks with Hanks’ real son, Truman, playing the younger Otto. We learn how Otto meets and marries Sonya (Rachel Keller), and the tragedy they endure. And like Marisol, we now have a new appreciation for this poor soul who is beginning to open up and embrace life again.

As I stated, it’s difficult to imagine anyone else portraying Otto better than Hanks. And his wife, Rita Wilson, apparently thought so when she purchased the rights for her husband to star. We’ve become so used to Hanks’ ability to play just about any role that it’s almost taken for granted. And Otto is the ideal character for him.

A MAN CALLED OTTO is at once hilarious and poignant. There is a great deal of humor in Otto’s shenanigans --- and, as the movie moves along, a lot of warmth and compassion. Hanks is the consummate pro with all of this. He’s so very endearing, even when he’s being cranky.

But as good as he is, Treviño is just as entertaining. Marisol is a little spitfire, who doesn’t understand the meaning of “no”. With her love and acceptance, she wears  down ol’ Otto until he’s a member of the family.

Garcia-Rulfo is well cast as the somewhat clueless but good-natured husband. And Perez and Montoya are beyond precious as the darling daughters. Rounding out the superb cast is Mack Bayda as Malcolm, Cameron Britton as Jimmy and Juanita Jennings as Anita.

If you are a Tom Hanks fan, A MAN CALLED OTTO is a definite “See It Now!”. It’s a terrific vehicle for him --- and Mariana Treviño. 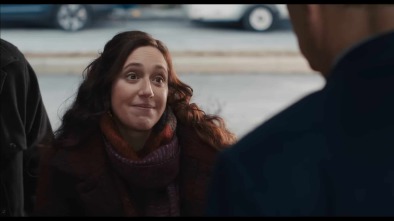 David:  It really doesn’t matter which role Tom Hanks chooses because he is universally loved regardless of the character he portrays. Hanks is the title character in A MAN CALLED OTTO and the grinch has nothing on Otto Anderson.

Otto is bitter since the recent loss of his wife and sees nothing worthwhile in his future. He snaps at everyone. He lives alone and is the “dictator” of his small townhome community in that he ensures that everyone living there follows the rules. Do not place recyclable trash in a non-recyclable container! Do not attempt to park inside the confines of the complex if you do not live there!

Otto is a true curmudgeon but that is subject to change when new neighbors move in. If it’s possible to upstage Tom Hanks in a film, Mexican actress Mariana Treviño comes close. She plays Marisol, the wife and mother of the family that has just arrived. She’s a feisty, persistent Latina who is not intimidated by Otto in any way. And she knows how to get through to him.

Intuitively we know that Otto does really have a heart --- he even takes in a stray cat --- and his coarse demeanor is destined to change. Sure, it’s predictable, but the fun is watching the transformation of bad Otto to good Otto. 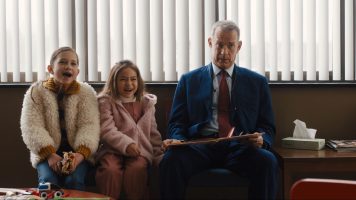 With a screenplay adaptation by David Magee (FINDING NEVERLAND) and direction by Marc Forster (FINDING NEVERLAND, MONSTER BALL, LIFE OF PI), A MAN CALLED OTTO is sufficiently entertaining with sharp comedic moments. While the film runs too long, who can forget scenes like Otto unsuccessfully trying to hang himself in his living room? Or his heartfelt and understanding attitude towards the local paperboy Malcolm (Mack Bayda), a transgender teen who has been kicked out of his home by his father?

The original film A MAN CALLED OVE was released in Sweden and nominated for two Academy Awards. It was the highest grossing foreign film in the U.S. in 2016. Fredrik Backman wrote the novel of the same name on which the Swedish version was based. Hanks’ wife Rita Wilson co-wrote and co-performs the song “Til You’re Home” in the Forster version. Hanks’ son Truman does a great job playing the young Otto in only his second film role, with Rachel Keller in a delightful performance as his wife Sonya. 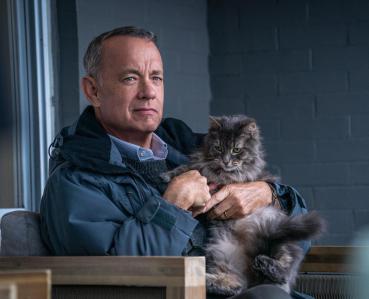