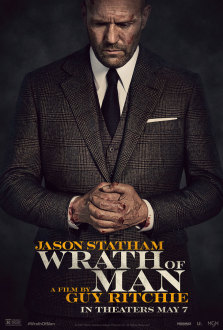 Director Guy Ritchie and his star, Jason Statham, go back many years to the 1990s with LOCK, STOCK AND TWO SMOKING BARRELS and SNATCH. Now after more than 15 years the two have reunited for WRATH OF MAN. Based on the 2004 French film “Le convoyeur”, Ritchie, Ivan Atkinson and Marn Davies are responsible for this revenge thriller’s fast-paced screenplay.

Statham plays Patrick Hill, the new employee at Fortico Security in Los Angeles following the horrific ambush of one of its armored trucks. His partner Bullet (Holt McCallany) dubs him “H” and all the other guards are a little leery of him, especially after he single-handedly stops another attempted heist.

Obviously, H is not who he claims to be and after some background context, we learn that he’s a crime boss who was unwittingly a part of the deadly ambush on the Fortico truck. Without going into too much detail and ruining the subplot, it becomes painfully apparent why H is where he is --- and why he is looking for revenge.

What H doesn’t know is that a group of ex-military men led by Jackson (Jeffrey Donovan) is plotting a major heist on Black Friday involving each Fortico armored vehicle which will net them close to 160 million dollars. Jackson and his band of violent misfits also have someone on the inside at Fortico --- a twist which will keep you guessing.

WRATH OF MAN is much more serious than most of Ritchie’s efforts. His last film, THE GENTLEMEN, was rife with wry humor despite its often-violent nature. But this time, the subject matter is deadly --- and there is nothing amusing about it.

Statham is so doggone entertaining, and he makes all his precision shooting and hand-to-hand combat look so effortless. He’s perfect for this role, the same thought Ritchie had when he contacted him. It’s difficult to imagine anyone else playing H, especially since Statham rarely cracks a smile anyway. He just oozes the manly stoicism necessary for these tough guy roles. Yum ---

As with most action thrillers, there are flaws. One major one comes right near the very end --- won’t give it away --- but hey, at least WRATH OF MAN doesn’t include my biggest pet peeve. I loathe when the person holding the gun talks the other person to death instead of shooting said person. Trust me --- that does not happen in Ritchie’s film. These guys definitely shoot first.

It’s great to see Donovan --- this is a very good role for him. Much like his presence on “Burn Notice”, he’s low key, but extremely effective. Scott Eastwood plays the nasty, smarmy Jan, one of the ex-military, with verve. And Eddie Marsan, who’s worked with Ritchie many times, has a small but pivotal role as Terry, the manager of Fortico’s depot.  Love Eddie ---

WRATH OF MAN is thrilling --- David and I were on the edge of our seats --- in a real, live screening, which was fabulous. If you’re a Jason Statham fan --- and I know there are a lot of you out there --- go to the movie theater to see this now!

WRATH OF MAN marks the reunion of director Guy Ritchie and actor Jason Statham after more than 15 years, and it’s good to report that the crime thriller/action genre these two have thrived in is alive and well. If you can stand a bit of mayhem --- okay, how about a lot of it --- and are seeking an edge-of-the-seat, seamless, non-stop cinema diversion, WRATH OF MAN is the solution. Jeanne and I watched it in a theatre, our first live screening in over a year.

Although the film is based on an earlier movie, the premise of armored vehicles being held up brought to mind a real-life heist that occurred over 70 years ago. The infamous Great Brinks Robbery of 1950 took place in Boston’s North End and the stolen loot of $2.7 million was regarded as the one of the biggest hauls of all time. Fast forward to current day and the Brinks incident --- adjusted for inflation --- would tally about $30 million.

However, in WRATH OF MAN, the group of ex-military men-turned-thieves, led by their former Sergeant Jackson (Jeffrey Donovan), plots an intricate holdup that will net them over $160 million, to be split seven ways. Of course, we know that crime doesn’t pay, and things don’t necessarily go according to plan --- which is part of the fun. Donovan has been equally adroit in his career portraying both good and bad characters. Here his Jackson role is that of a family man looking to support his wife and two kids.

Filmed primarily in London with some exterior shots in Los Angeles where the fictional armored car company Fortico Security is based, the opening scenes grab our attention instantly as Patrick Hill (Statham) is a mysterious new hire. His partner Bullet (Holt McCallany) immediately dubs him “H”. Checking his overall stamina and prowess at the shooting range, H scores the minimum 70% needed to secure his job, including missing the target bullseye repeatedly. But when the first wave of thugs arrives to hold up a Fortico vehicle H’s marksmanship improves dramatically. Clearly, he is something other than what Bullet and others thought.

At this point I would recommend you not view the trailers ahead of seeing the film. Much is given away about some of the more exciting confrontations between H and the bad guys. WRATH OF MAN is too well conceived to warrant spoiling anything. The many stunts that take place in the filming were intentionally not extensively rehearsed because Ritchie wanted them to look as authentic as possible in terms of how real fighting goes down. It works!

The director and four other writers, including Marn Davies and Ivan Atkinson who worked with Ritchie on his 2019 hit THE GENTLEMEN, have collaborated to bring to the screen an intelligent, hard-hitting and superbly orchestrated thriller. Oscar-winner Christopher Benstead, who won his gold for GRAVITY, provides the intoxicating score and is also reunited with Ritchie after his work on THE GENTLEMEN. And technical kudos go also to director of photography Alan Stewart and film editor James Herbert for their fine work.

Other cast standouts include Eddie Marsan as Fortico’s manager Terry, who is the only armored car employee not to play the hero even as he implores others to lay low during a robbery with his plea of “It’s not your money!”. One of the firm’s drivers, Boy Sweat Dave (Josh Hartnett), provides what little comic relief there is, and Scott Eastwood (Clint’s son) is a thug named Jan we love to hate. Andy Garcia has a small role as Agent King --- virtually a cameo with not much to do.

Clearly, though, WRATH OF MAN is Statham’s time to shine as a crime boss out to avenge a killing. Ritchie’s script and direction emphasize that you don’t want to be on the wrong side of Patrick Hill. Even as an extremely violent individual with an agenda, Statham’s portrayal of H manages to elicit our sympathy. The actor’s solemn exterior belies the complicated and driven lead character that simmers within.