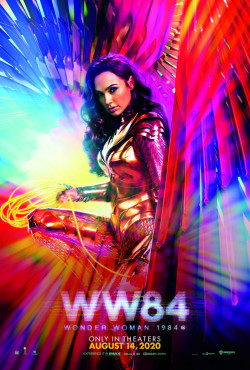 Okay, so WONDER WOMAN 84 is not WONDER WOMAN from 2017, but it’s still rollicking fun --- for the most part --- and pretty entertaining, despite what David writes. I knew he was in trouble when he couldn’t stay awake --- and we watched it at 4:00 in the afternoon. He’s never been a big action-hero fan, so there’s that. But we watched it with our daughter --- and she and I loved it.

female warriors. On the last leg of the competition, Diana is riding her gorgeous horse and she gets knocked off, losing her place. Instead of giving up, she takes a short cut slide, regains first place --- only to be yanked out of the event by her aunt, Antiope (Robin Wright). As Diana tearfully objects, Antiope profoundly states “No true hero is born from lies.”. Prophetic, no?

Flash forward and it is 1984. Diana Prince (Gal Gadot) is working as a Smithsonian when she’s not out saving the world. A new colleague, Barbara Ann Minerva (Kristen Wiig), who is practically invisible to the people around her, becomes totally enamored with Diana. She wants to be just like her --- and she gets her wish when a mysterious ancient artifact known as the Dreamstone shows up on her desk.

Barbara isn’t the only one interested in this strange object. A con man named Maxwell Lord (Pedro Pascal) has big plans and needs this stone to put his quest for money and power into motion. The Dreamstone grants wishes --- and Diana’s is to have Steve (Chris Pine) back in her life. But as Max and Barbara, who is now Cheetah, take their desires to outrageous levels, Diana and Steve must find a way to stop them.

WONDER WOMAN 84 is directed by Patty Jenkins, who also directed WONDER WOMAN in 2017. She also co-wrote this screenplay with Geoff Johns and David Callaham. At 2 ½ hours, it is way too long --- and a common complaint is that too much is going on --- and not enough of Gadot being Wonder Woman doing good deeds.

I can go along with these criticisms, but I am of the opinion that this genre is more along the line of mindless enjoyment. We aren’t meant to work that hard to get lost in these comics --- and in that vein, WONDER WOMAN 84 works.

Let’s face it, 2020 has been a tough year --- and we all need as many distractions as we can get. And considering all the lies we’ve been subjected to during this recent election cycle and post-election period, to hear Wonder Woman utter the phrases “Truth is enough. Truth is beautiful.”

at the end of the film, brings home just how important telling the truth truly is.

This sequel to the 2017 smash hit WONDER WOMAN starring Gal Gadot is generally about wishes being granted for all the wrong reasons. My wish is that WONDER WOMAN 84 be as good as its predecessor --- but no such luck --- which won’t make Jeanne or our daughter very happy.

I will dispense with the synopsis and just remark that WONDER WOMAN 84 starts off with a BANG! For the intricate opening scenes, returning director Patty Jenkins --- who co-wrote the screenplay --- has chosen to highlight young Diana Prince (Lilly Aspell, also a returnee from the first movie), in a high-powered competition with a group of adult Amazon women. Their varied tasks could make up a whole season of reality television. Well-deserved plaudits should go to the large stunt crew (over 120 by my count) and the massive group of visual effects people for some spectacular sequences.

But then WONDER WOMAN 84 bogs down --- for quite a while. While Jenkins establishes the return of Steve Trevor (Chris Pine) and introduces two new villains, Maxwell Lord (Pedro Pascal) and Barbara Minerva/Cheetah (Kristen Wiig), a long absence of action did not sustain my interest.

Pascal, well-known for the heroic character he portrays in “The Mandalorian” is the antithesis of that persona here --- let’s just say this dictator-wannabe, Lord, is well named. His character is a bit over the top in terms of the level of greed that he displays --- could DJT have been an inspiration for this guy? But his outrageous behavior is well-suited for the finale. Wiig is almost SNL-like as the nerdy, unconfident Barbara, but by the film’s end she has morphed into the power-hungry Cheetah, a sworn enemy to Wonder Woman with no remorse.

At the center of it all is Gadot as Diana Prince/Wonder Woman. She’s just as lovely as before and just as imbued with the same superpowers with which we’re all familiar. There is a twist which won’t be revealed here. But a major problem in this sequel is that Wonder Woman is not given a lot of heroic things to do.

The story does pick up some much-needed adrenalin --- too little too late --- but the best aspects are the wishes that ordinary people all over the globe announce and are granted. One that stands out is the argument between a married couple who operate a retail establishment. The husband wishes that his wife would drop dead --- and she does --- not that that is particularly funny, just interesting about the things people wish for in a moment of anger.

I would also criticize the fight sequences as being far too long. I re-read my review from the 2017 original and praised Jenkins for her restraint in keeping the individual battles to a decent length. In WONDER WOMAN 84 she is caught up with the favorite format of many male filmmakers, i.e., overly drawn-out fight scenes.

At 151 minutes I can’t recommend this film other than to advise a viewing at home. Of course, that is redundant in the era of Covid, but you know what I mean.