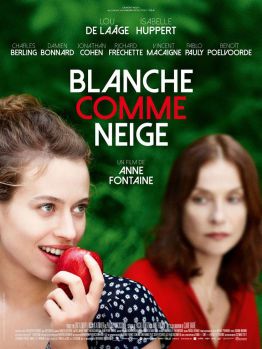 WHITE AS SNOW is French filmmaker Anne Fontaine’s take on the Grimm Brothers’ fairy tale “Snow White”. Starring the exquisitely beautiful Lou de Laâge as Snow, er um, I mean Claire, and Isabelle Huppert as the villainous queen, but in this case, stepmother Maud, there are also seven men, albeit they are not dwarves.

The ethereal Claire still works at the hotel previously owned by her dearly departed father, now run by Maud. On one of her daily runs through Paris, she is accosted and thrown into the trunk of the kidnapper’s vehicle. A car accident in the woods in the French mountains affords Claire the opportunity to flee, and a missed assassination attempt has her awakening in a strange house owned by twin brothers (both played by Damien Bonnard). Not quite like Snow White, but close.

Formerly shy and alone, Claire now has this small French village at her feet with all the eligible men --- young and old --- clamoring for her attention. Even the local priest, Father Guilbaud (Richard Frechette), is taken with her, but in a strictly platonic way. It is perhaps his relationship with Claire that is the most genuine in WHITE AS SNOW.

Fontaine and her co-writer Pascal Bonitzer have taken liberties with the popular fairy tale, but they did manage to throw in the poison apple. Fortunately, Claire was spared the deadly fruit, but one very nosy squirrel wasn’t so lucky. And the other six men --- remember the priest is just a friend --- awaken in Claire a sexual freedom previously unknown to her.

De Laâge is quite the beauty --- and also a terrific actor. This is the first time she’s worked with Huppert, one of the most accomplished women in films --- and gorgeous, as well. Much like the queen, Maud is constantly checking her reflection, especially after her lover, Bernard (Charles Berling), has made it abundantly clear he prefers Claire over her.

These two women work beautifully together. Their slow dance near the end of the film was completely improvised and illustrates the depths of their strengths --- and Maud’s crazy obsession with doing away with poor Claire. Huppert is a hoot --- she’s completely menacing --- even when she’s vaping.

WHITE AS SNOW is pure fluff --- but even at its worst, French fluff is better than any other. The ending is a tad bizarre, so if you choose to watch, you’ll have to decide for yourself.

For a film with a fair amount of nudity and sexual situations, WHITE AS SNOW manages to avoid an “R” rating, which I suppose has as much to do with its French origins as anything else. I will say that 31-year-old beauty Lou de Laâge, looking more like she’s only 19,

plays the protagonist Claire with a totally uninhibited and free-wheeling style.

Without her infectious laugh and coquettish behavior, WHITE AS SNOW would have little to offer despite the presence of the legendary Isabelle Huppert as Claire’s stepmother Maud. Completely jealous of Claire’s attraction to men of all ages, including Maud’s lover, Bernard (Charles Berling), Maud hires an incompetent assassin (Agata Buzek) to kidnap Claire and put her stepdaughter out of commission. Of course, that fails, or WHITE AS SNOW would have a running time of about 10 minutes.

Escaping from the trunk of the would-be-killer’s crashed vehicle, Claire ends up in a rural house inhabited by three men, twins Pierre and François (Damien Bonnard) and celloist Vincent (Vincent Macaigne), who happens to own a huge white dog that Jeanne swooned over --- rightfully so --- whenever it appeared on screen. Actually, the dog steals the show with its soulful staring at Vincent whenever he’s playing his instrument.

Despite her unknown surroundings, Claire is won over by the men and begins to realize her sexual awakening when she and one of the twins get physical. Part of the humor in this film arises when Claire entices another sexual encounter, not knowing he is the other twin. We don’t care because de Laâge, aside from appearing to enjoy herself portraying the sudden siren, has all the earmarks --- and this will be heresy to some --- of Brigitte Bardot. There --- I said it.

Meanwhile, Claire goes on a sexual spree with four other men, mostly likeable gents who cannot help themselves when it comes to Claire’s beauty. Thus, the magic number of men in Claire’s life is seven, one being a priest with whom she enjoys a platonic relationship, as director Anne Fontaine suggests it is related to “Snow White”. A tragic encounter by a local squirrel with a poisoned apple adds to the fairy tale symmetry.

The third chapter of WHITE AS SNOW concerns itself with Maud desperately trying to finish the job that her hired assassin bungled. It’s not nearly as tense as it might have been. Fontaine keeps the scenes light, as when a doctored drink prepared by Maud gets knocked from her hands by a bar patron. And the film has one of those unclear endings, leaving it up to us to come up with our own conclusions. Initially I thought maybe the finale is ambiguous, but upon reflection it is perfectly clear.

While WHITE AS SNOW is forgettable once the closing credits roll, de Laâge leaves a lasting impression for her unabashed portrayal of a young woman coming to terms with her own sexuality.