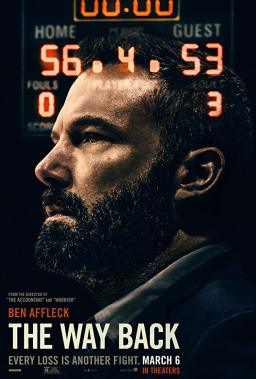 Ben Affleck gives an emotion-packed performance as Jack Cunningham in Gavin O’Connor’s latest effort, THE WAY BACK. Jack, a full-fledged alcoholic, presents a lot of challenges for Affleck who has had his own issues with alcohol addiction.

In THE WAY BACK, we meet a very solitary man, who wakes up in the morning with a beer in the shower, drinks hard alcohol all day at work, then settles in at his favorite dive bar where he drinks enough to pass out --- and start all over again the next day.

Jack has his demons --- we just don’t know all of them yet.

He receives a phone call from Father Edward Devine (John Aylward), the head of Bishop Hayes High School, Jack’s former Catholic college prep school, where he was a formidable basketball star. The current coach has just suffered a heart attack and Fr. Devine prevails upon Jack to take the job.

After assessing all the reasons why he can’t, including the fact that he’s never coached, Jack finally acquiesces to the priest’s request. His assistant coach, Dan (Al Madrigal), introduces him to the scrappy team of characters who haven’t won very many games. But as Jack hits his stride as coach, the players come together and up their game with impressive results.

THE WAY BACK is not really a basketball movie, though O’Connor, who directed MIRACLE (2004) and WARRIOR (2010), does know his way around sports. Clearly, Jack Cunningham has issues and things in his past which exacerbate his disease. This is a story about redemption and ultimately facing those problems which drive one’s addiction.

Affleck wanted to take this deep dive into Jack’s character. He’s faced his own darkness and has been willing to discuss some of those experiences. It’s a powerful portrayal that is never overbearing or maudlin. It’s an honest expose of a broken man, and Affleck’s bone-weary persona adds a great deal to the realism.

He has a few excruciating scenes with his now-separated wife, Angela (Janina Gavankar), who delivers a beautifully sad and quiet performance. When Jack finally opens up to Angela about all his past mistakes, the pain and anguish for both of them is as real as possible. This is truly one of Affleck’s finest performances.

THE WAY BACK is not a great film for a variety of reasons. But it is a movie that Affleck is very proud of --- “the idea that you can face hard things and get better”. Words to live by ---

Skeptics may look at Ben Affleck’s new film and see quite a few clichés masquerading as a sports movie. In fact, there are a number of stereotyped themes, like the reluctant new coach molds a losing team into a winning one or the quiet star of the high school basketball squad comes out of his shell.

However, THE WAY BACK is more than just an inspiring tale about young hoopsters turning their basketball fortunes around. Even more importantly, the story centers around former All-Everything player Jack Cunningham (Affleck) looking for new meaning in a life that has been on a steady downward spiral.

He is separated from wife Angela (Janina Gavankar), he goes to work on a construction site every day where he drinks alcohol many stories above the ground and he continues his alcoholism the rest of the time, even imbibing beers in the shower. There is more to his story --- namely a very tragic event ---revealed later. But can the offer of coaching his high school alma mater bring redemption to Jack?

Affleck’s turn is as good as anything the two-time Oscar winner has ever done. We believe Jack really is a basketball coach, which includes the frequent use of profanity directed at both his players and the referees, much to the chagrin of Father Whelan (Jeremy Radin). Of course, this provides much of the humor in the movie, but three elements make THE WAY BACK a very good film.

First, Affleck’s performance is so very convincing, both on and off the court. Second, the supporting effort by Al Madrigal as assistant coach/algebra teacher Dan is a highlight. And third, the players are also credible actors in addition to looking like legitimate basketball players.

Director Gavin O’Connor worked overtime to make sure the actors who made the final cut looked like natural athletes. At the top of this list is Brandon Wilson as Brandon, the one player Coach Cunningham calls the best on the fictional Bishop Hayes High School Tigers. And whether you know basketball or not, Wilson instantly looks like the real deal the way he handles himself on the court.

All the basketball game sequences --- even the pre-game warmups --- are well choreographed and photographed. The film has a unique way of flashing the final scores of games, both for the team’s early losses and later as they go on an extended winning streak. Certainly, climactic last-second hoops are a trademark of a good basketball story and THE WAY BACK provides us with several chill-inducing, albeit mostly predictable, final shots.

THE WAY BACK is solidly co-written by Brad Inglesby, with help from O’Connor. The director has helmed quality films like THE ACCOUNTANT (2016) which also starred Affleck, and MIRACLE (2004) about the 1980 U.S. Olympic hockey team that upset the Russians. So, he knows a thing or two about how to make a stirring sports story.