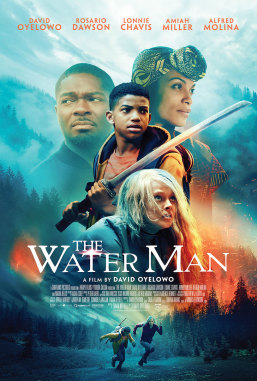 In David Oyelowo’s directorial debut, a lonely boy, Gunner Boone (Lonnie Chavis), wants so very much to save his gravely ill mother, Mary (Rosario Dawson), that he embarks on a dangerous journey into the Wild Horse forest to find the legendary Water Man, whom he believes possesses the key to immortality.

Gunner is a really sweet boy. He tools around their new small rural town on his motorized scooter and makes friends with the local bookstore owner. The idea was to move here so Mary could get better, but unfortunately she’s only gotten worse. Gunner’s father, Amos Boone (Oyelowo), doesn’t understand him, nor does he appreciate Gunner’s exceptional artistic talent.

When Gunner encounters Jo Riley (Amiah Miller), a teenage girl, and hears her story about the Water Man and his ability to cheat death, he is immediately intrigued. He calls on Jim Bussey (Alfred Molina), the town curmudgeon, to learn more about this mythical man.

Jim gives him a copy of his map leading through the Wild Horse forest to the lake where the Water Man can supposedly be found. For a price --- all of Gunner’s cash --- Jo agrees to lead him to the lake. But as they begin their journey, things in the forest become more and more dangerous.

With a beautifully written screenplay by Emma Needell, THE WATER MAN is a truly moving film about love and family. All Gunner wants is for his beloved mother to get well --- and he is willing to do just about anything to make that happen. And Amos has to learn to accept his son’s differences --- and appreciate them.

Chavis, who had his  breakout on TV’s “This Is Us”, is remarkable, and certainly up to the task of the starring role in THE WATER MAN. His interactions with Dawson and Oyelowo are solid and believable. But it is his relationship with Miller which makes THE WATER MAN such a heartwarming experience. They play off one another extremely well despite their unlikely friendship.

Oyelowo’s directorial touch is light and effective. He gets the most from his two young stars without overburdening the storyline. He and Dawson have a nice rapport, with Dawson not overdramatizing her illness. THE WATER MAN is an honest look at a family’s struggle with a serious illness and what it takes to stay together --- and love.

As a father himself, Oyelowo’s desire was to make a movie about family that he could watch with his own four children. And in that vein, he has succeeded mightily.

David Oyelowo tries his hand at directing a feature-length film called THE WATER MAN, written by another first-timer Emma Needell. The duo partially succeeds in what will likely appeal to younger kids and their parents.

The messages are transparent enough, even queried during the movie. Would you rather live a shorter life with love or a longer one without love? And there is no more important asset than hope. That is the basis of what motivates a mythical creature called the Water Man.

Whether he exists or not will be revealed, but this legend of the Pacific Northwest --- wild fires in Oregon set the backdrop --- has it that the Water Man is constantly looking for his dead wife in the swirling waters of a local river so he can bring her back to life with the help of a magic stone.

Young teen Gunner Boone (Lonnie Chavis), a budding artist and writer, has moved to Oregon with his mother (Rosario Dawson) and father, Amos (Oyelowo). We soon learn that Gunner’s mom is suffering from leukemia and the local nurses and doctors are not doing much to help her, at least in Gunner’s eyes. So, he visits his friend who owns the local bookstore to check out all the books he can find on the disease. And he listens to a local denizen (Alfred Molina) who convinces Gunner that the Water Man is, indeed, very real.

Gunner becomes friends with a local wild child, a pretty blond named Jo (Amiah Miller) who claims to have seen the Water Man. The pair sneak off to the forest in search of the legendary character so Gunner can help his ailing mother. Also, Jo has confided that she has not been the recipient of much love at home. Those close to her have either died, left or want nothing to do with her. This makes the ending easily predictable.

The movie tries mightily to build suspense as Gunner’s worried dad reports him missing. But that doesn’t quite work because we know he’s alright. Although he and Jo run into a few travails in their

search --- Gunner slips on a log crossing the rapids, and he can’t swim --- we never feel a sense of dread or doom. But again, younger viewers may appreciate their plight.

Dawson’s character and her relationship with her son are real enough so there is no doubt about Gunner’s desperate desire to help her. His father, on the other hand, always seems to make missteps, like accidentally stepping on one of his son’s sketches as he exhorts Gunner to go outside and toss a football.

Whereas the bulk of the film follows Gunner and Jo through the forest, there is barely enough of a story to hold the interest of adult moviegoers. Some scenes are well intended, like the stampeding of wild horses that seem to chase the kids through the underbrush. However, the technical visual effect leaves much to be desired as the horses don’t seem to be in the same realm as Gunner and Jo.

Chavis and Miller form a decent enough bond even as he chastises her for stealing candy from a local store. The young actors, particularly Chavis, display enough talent wherein we can anticipate better things from them in a stronger script. But their friendship does grow as they parry the shared dangers of the forest.

Oyelowo is a fine actor and there is no reason to doubt he will become an equally fine filmmaker. THE WATER MAN will not be looked upon as his best directorial effort, but it is at least the start of that lofty ambition.