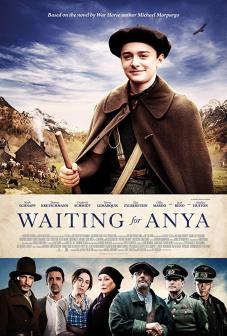 Noah Schnapp of “Stranger Things” fame stars in WAITING FOR ANYA as Jo Lalande, a 13-year-old shepherd in the southeastern mountains of France, who first hides then helps smuggle Jewish children into Spain towards the end of WWII. Anjelica Huston and Jean Reno also star as the adults in this scenario who aid and abet Jo in this dangerous mission.

Based on the book of the same title by Michael Morpurgo, who also wrote “War Horse”, WAITING FOR ANYA is for children as well. That was a huge pet peeve of mine at the time the film WAR HORSE was released. Many critics, including David, conveniently forgot that this was a story meant for children --- to help them learn --- and to deal --- with the massacre of millions of horses in WWII.

And here, WAITING FOR ANYA, too, is a film catering to the young set. Screenwriter/director Ben Cookson has created a movie that can be understood by children --- one they can learn from --- and still be appreciated by adults.

A Jewish man, Benjamin (Frederick Schmidt), and his very young daughter, Anya, are rounded up by the Nazis in 1942. Before both are sent away on separate trains, Benjamin manages to hand off Anya to passengers on another train. He himself escapes into the woods and moves on to the village, Lescun, where Jo resides.

Unbeknownst to Jo, Benjamin and Benjamin’s mother-in-law, Horcada (Huston), and Henri (Reno), Jo’s grandfather, are hiding a group of Jewish children in Horcada’s barn. When Jo proves he can be trusted, Horcada presses him into service ---- doing the shopping for food from the village. When a garrison of German soldiers arrives in the village to hunt for Jews --- and they end up staying --- things for Jo, Horcada and Henri get much more difficult --- and deadly.

Schnapp is absolutely perfectly cast as the genuinely compassionate Jo. He conveys his character’s earnestness with valor. Jo has been given a mighty responsibility and Schnapp makes us grasp the intensity of the situation. His “friendship” with the German korporal (Thomas Kretschmann) also adds to the tenseness and danger of their plight.

Huston, Reno and Kretschmann, veterans who bring a definite panache to their roles, are wonderful necessities to the cast. I wasn’t crazy about Huston’s accent, but her presence alone is paramount to the storytelling.

The cinematography by Gerry Vasbenter is breathtaking. WAITING FOR ANYA was filmed on location in the Pyrenees where the story takes place. The score by James Seymour Brett adds to the captivating beauty of this wonderful film. And remember, this is a movie for children --- one that is entertaining for the entire family.

WAITING FOR ANYA is yet another film about the Nazi regime in WWII persecuting Jews. It’s almost a mini version of SCHINDLER’S LIST in that a small group of children are being hidden by a French widow and her son-in-law until they can be safely escorted over the mountains to Spain.

Consummate veteran actors Anjelica Huston (Horcada) and Jean Reno (Henri) anchor the story, but it is Noah Schnapp as Jo, the 13-year-old shepherd boy, who does much of the necessary deeds, like obtaining food and hiding the secret from one of the occupying Nazis known as korporal (Thomas Kretschmann). Schnapp, now only 15, is a regular on “Stranger Things”, while Kretschmann is a veteran of over 130 film and television credits.

WAITING FOR ANYA is derived from the novel by Michael Morpugo, who also is known for writing “War Horse” upon which the stage play and then movie were based. While this film doesn’t necessarily tug at the heartstrings like others of its ilk, we do relate to the characters, including Jo’s Papa, played by Gilles Marini. Early in the movie Anya’s father, Benjamin (Frederick Schmidt) hands Anya to a woman on a train to spare his daughter from a concentration camp, so the question becomes will he ever see Anya again?

Huston and Reno showcase their talent as they argue vehemently about the timing of when to escort the children to the haven of Spain. In fact, the movie generates a fair amount of suspense as the local pastor (William Abadie) is complicit in stalling the Nazis, especially their dangerous leader, a leutnant, (Tómas Lemarquis), while the children and adults make their way up the mountain to freedom. And more tension arrives in the form of the German korporal as he and a few soldiers appear next to the cabin where the children are hiding.

The korporal has recently lost a daughter himself. This begs another question --- will he ultimately become sympathetic to the plight of the Jewish children? The good performances and storyline of WAITING FOR ANYA are worth a viewing.