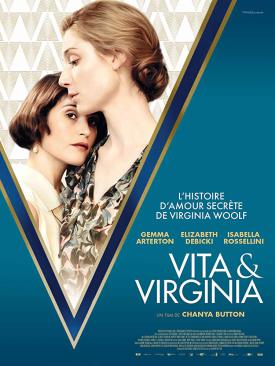 In 1882, the celebrated author Virginia Woolf was born. Ten years later, aristocratic socialite Vita Sackville-West --- also a writer --- is born. These two women meet in 1922 for the first time and both of their lives --- and literature --- will be forever changed. This is the subject of VITA & VIRGINIA.

Virginia (Elizabeth Debicki) is married to Leonard Woolf (Peter Ferdinando) and together they run Hogarth Press, a publishing company. They are also instrumental to the Bloomsbury Group, which they founded along with Virginia’s sister, Vanessa (Emerald Fennell), a painter, to exert influence over the arts, with a very modern take on sexuality.

When Virginia, who is rather shy and reserved, meets the vivacious Vita (Gemma Arterton), the two women are smitten. Vita, who is married to the diplomat Sir Harold Nicolson (Rupert Penry-Jones), has already run off with one female lover, and Harold, sensing her immediate attraction to Virginia, warns her not to repeat that mistake. Even Vita’s mother, Lady Sackville (Isabella Rossellini), threatens Vita with financial ruin if she disgraces her and her social standing by carrying on again with another woman.

Though Vita fears the loss of her ancestral home, which, by law, she can never inherit because she’s a woman --- talk about maddening --- she is powerless in her love for Virginia. Virginia, for her part, is ambivalent about her sexuality though she realizes how greatly she is attracted to Vita. At last, relinquishing her anxieties, she allows herself to be swept into a relationship with the seductive Vita, thus changing her entire future writings.

VITA & VIRGINIA is masterful at exploring this passionate affair between these two brilliant women who were way ahead of their time. While Virginia is a more tragic figure in English literature, the brash Vita makes no amends for her scandalous behavior, cementing her place in history by allowing Virginia to use her as the muse for “Orlando; A Biography”, Woolf’s best-known novel.

Arterton was attached to the production first because she is acquainted with Eileen Atkins who originally wrote “Vita & Virginia” as a play. When it was set as a film, Atkins thought Arterton would be perfect as Vita, and she is. Her beauty is undeniable, and her smoldering sexuality is palpable. She and Debicki share an unusual but charged chemistry. It’s obvious how different Vita and Virginia truly were, but the attraction between them was as much cerebral as it was physical.

Director Chanya Button, who co-wrote the screenplay with Atkins, had been a devoted Virginia Woolf fan long before this project. Her attention to detail creates the magical world inhabited by these characters. And her lighting choices are significant, with dark and drab for Virginia and Leonard’s world, bohemian gauziness for Vanessa’s country house, to the exquisite illumination of the aristocratic backdrops.

Button and her cast and crew prefer not to think of VITA & VIRGINIA as a period drama. They were striving for “young and fresh”, though, in that, I’m not sure they are successful. Even costume designer Lorna Mugan believed in the importance of dressing Vita as “progressively” as possible. Her costumes are quite divine, especially her driving apparel. Each time Vita pops in and out of her topless roadster --- which is marvelous --- in one of her fabulous outfits, it’s another significant detail.

The screening room for VITA & VIRGINIA was rather luxurious with plush chairs and matching footrests. I thought for sure David would fall

asleep --- praying he wouldn’t snore --- but, he did not! So that’s saying something, because the pace of VITA & VIRGINIA is somewhat slow. But, it’s the kind of movie I live for.