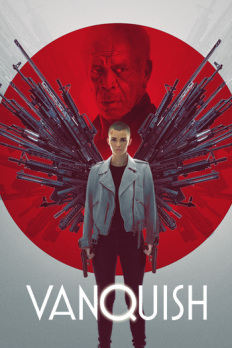 VANQUISH is one of those films that is so flawed and ridiculous that it turns out to be pure camp. Director George Gallo, who co-wrote the screenplay with Sam Bartlett, is a fan of the Korean gangster film genre, so he fashioned VANQUISH in the same vein.

Morgan Freeman stars as Damon, a retired police commissioner who was paralyzed on the job and lives in a massive home on the water. His caregiver, Victoria (Ruby Rose), was once a drug courier for the Russians, but now she is a mother to sweet, little Lily (Juju Journey

Brener), having put those violent days behind her.

Damon, however, has other plans for Victoria and her unique skills. He kidnaps Lily and forces Victoria to make five very large money pickups all in one night. After each, she is to return to Damon with the illegal loot, getting the address for the next stop. After all five have been completed, she will get Lily. What could possibly go wrong?

There are so many problems with VANQUISH, I don’t know where to begin. The most egregious is the “kidnapping” of Lily. It all happens so fast that it’s quite obvious she must be somewhere in Damon’s sprawling mansion. But it never occurs to Victoria that she could simply search the home to find her?

Nonetheless she agrees to Damon’s demands, chooses her weapons and takes off on her rather slick Harley Davidson. She’s also equipped with headphones so Damon can talk to her constantly and a bodycam so he can see everything that is happening.

VANQUISH is loaded with all the requisite dirty cops, including Damon, thugs, car chases, violence, etc. one would expect from this kind of action thriller. At 96 minutes it moves along at a brisk pace accompanied by an appropriately jarring techno soundtrack by Aldo Shllaku.

Freeman is in a wheelchair the entire movie, so his contribution is limited. It’s curious why he would have agreed to make this film other than for a paycheck. Rose on the other hand is entertaining enough, but we never get the sense that she’s in any real danger. And the reason behind Damon’s bizarre plan becomes all too apparent too quickly.

Unfortunately, David and I have reviewed much worse films. He likes VANQUISH more than I, and it does manage to hold your interest --- mostly. But can I heartily recommend it? Not really.

The first thing you’ll notice about VANQUISH is how long the opening credits run --- but with a purposeful reason. We get to know one of the lead characters, Damon (Morgan Freeman), a retired police commissioner. Through newspaper headlines interspersed amongst the credits we learn that Damon has an extensive history of heroic deeds from the time he was a rookie cop through later promotions.

Why is this important? Because VANQUISH, at a mere 96 minutes, can tell its story in a short amount of time. The action thriller takes place seamlessly in a single night. Co-writer and director George Gallo (screenwriter for MIDNIGHT RUN) compares his style in this film to others that took place in “a compressed amount of time”, citing iconic films like HIGH NOON, BAD DAY AT BLACK ROCK and THE TAKING OF PELHAM ONE TWO THREE.

Damon is wheelchair bound from a previous accident, living in a lavish modern home. The property looks far too expensive for someone with a career in law enforcement, so obviously he has acquired the means for his lifestyle some other way. It gives nothing away to say that he has a shady side which is hinted at when we first see Freeman on screen in a priest’s confessional recalling the bad things in his life of which Damon is not proud.

We also meet a few detectives who are in fact crooked cops involved in a scheme of which we are told very little. They are complicit with Damon --- someone who happens to be a very powerful guy.

As Damon’s caregiver, Victoria and he are very close. He offers to cover the costs of Lily’s medical needs. But Victoria scoffs at the idea because it comes with one condition from Damon --- she must reprise her role as a Russian drug courier and complete five missions he assigns to her. But because Damon has hidden Lily in a location unknown to Victoria, she acquiesces to his demands and the action begins.

Despite some flaws as Jeanne mentions, I found VANQUISH to be very entertaining. Freeman spends the entire time in a wheelchair communicating with the motorcycle-riding Victoria as she makes her rounds. He is his usual stoic persona and is always compelling in any performance --- we’ll allow him some slack for appearing in COMING TO AMERICA 2. I especially like his rendition of “Hail, hail – the gang’s all here!” at the finale of VANQUISH.

Rose’s character is a terror on two wheels and a deadly shooter with her pair of guns. She does not do her own riding in the movie. That falls to stunt woman Crystal Hooks, an accomplished motorcycle pro. Rose is stellar as the put-upon femme fatale combined with a true love for her daughter. Victoria is one terrifying presence that all the bad guys seem to underrate.

The film features quite a few car chase scenes as Victoria is pursued on her motorcycle by a variety of thugs. Credit goes to Director of Photography Anastas Michos for sustaining the tension. The chases are well conceived, and the editing is superb. The music in VANQUISH is also special. Award-winning composer Aldo Shllaku has created a kinetic score that complements the action sequences perfectly.

Yes, VANQUISH is particularly violent but no one will feel sympathy for any of Victoria’s victims. The movie is designed to be fun, albeit in a deadly way --- and provide escapism --- which it manages to do very well.