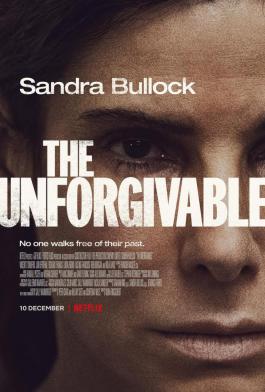 It’s been a while since we’ve seen Sandra Bullock in a film. Her last movie, BIRD BOX (2018), also a Netflix production, broke viewing records on the streaming service. Now she’s starring in THE UNFORGIVEABLE as a recently released felon who must learn to cope with life after prison --- clearly a departure from her many other roles.

Ms. Bullock plays Ruth Slater, a woman accused and found guilty of killing a police officer, who has spent the last 20 years behind bars. She’s released into the custody of her parole officer, Vince Cross (Rob Morgan), who minces no words about the difficulties of life on the outside --- especially since people find her crime so heinous.

Ruth is interested in only one thing --- finding and contacting her little sister, Katie (Aisling Franciosi), who was only five years old when Ruth was sent away. Warned by Cross not to pursue this course of action, Ruth will not be denied, convincing an attorney, John Ingram (Vincent D’Onofrio), to take her case against the wishes of his wife, Liz (Viola Davis).

Directed by Nora Fingscheidt and written by Peter Craig, Hillary Seitz and Courtenay Miles, THE UNFORGIVEABLE boasts an all-star cast, which also includes Jon Bernthal, Richard Thomas and Linda Emond. There is certainly nothing glamorous about an ex-convict gutting fish for a living at one job and helping to build a homeless shelter at her second job, and Bullock seems to revel in this portrayal of a woman with a disturbing past.

While there are some flaws, THE UNFORGIVEABLE tells a gripping story of how the penal system in this country fails so many people, especially women --- and women of color. Bullock did a lot of research, talking to at least three different women, who were incarcerated, before filming began. It is a known fact that many parolees end up back in prison and THE UNFORGIVEABLE dedicates much of the screenplay to the grave injustices perpetrated upon ex-convicts, particularly those labeled a cop killer.

Bernthal is a decidedly good choice for Ruth’s co-worker at the fishery. He and Bullock develop a believable chemistry, considering she doesn’t even smile until over halfway through THE UNFORGIVEABLE. D’Onofrio and Davis have rather small roles, but their presence adds heft and gravitas. Plus, only Davis can pull off the perfect smirk, then transition 180 degrees when the final twist is revealed. Seriously, I could watch her in anything, though her vast talent is a bit wasted here.

THE UNFORGIVEABLE is a satisfying re-emergence for Bullock --- and her fans.

THE UNFORGIVEABLE grabs the viewer from the first moments as a somber Ruth Slater (Sandra Bullock) is released from prison for a soon-to-be explained violent crime. It is so good to see Bullock return after a three-year hiatus in a meaty role that reminds us why she was named Best Actress in THE BLIND SIDE (2009).

Ruth returns to her hometown of Seattle, but her crime overrides any hope she has of living a peaceful, normal existence. Only a sympathetic co-worker, played sensitively by Jon Bernthal, shows her any real kindness. The movie is consumed by Ruth’s obsession to reconnect with her much younger sister who was five years old at the time of the incident which led to Ruth’s imprisonment.

Her desire to be reunited with her sibling is met by staunch resistance, mostly from the sister’s non-biological parents, played by Richard Thomas and Linda Emond. A local attorney (Vincent D’Onofrio) is willing to represent Ruth and give her a chance at redemption, but not his wife (Viola Davis). When Ruth is confronted by Davis’s character at the latter’s home, Ruth’s pleas that her sister was “only five years old!” are heartbreakingly moving. If this outburst doesn’t melt your heart, see a doctor.

Ruth has developed skills in prison that she puts to good use after her release, most notably as a carpenter helping to build a shelter for the homeless. Bullock uses a nail gun like she was born with it. If nothing else, see THE UNFORGIVEABLE for Ms. Bullock’s emotional layered performance. And a surprise reveal that nobody will see coming.