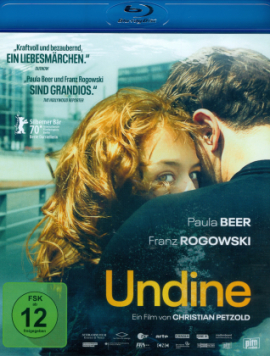 Whether you are familiar with the myth of Undine, the betrayed woman of the waters who lives in the lake in a forest, is immaterial. As writer/director Christian Petzold’s latest film, UNDINE, unfolds we are treated to a somewhat bizarre yet definitely romantic modern rendering of this ancient fable.

Undine (Paula Beer) dutifully warns Johannes (Jacob Matschenz) that if he leaves her for another woman, she will have to kill him. So goes the legend --- if betrayed by the man Undine loves, she must end his life and return to the water.

She begs Johannes to reconsider over coffee, but then she must leave to go to her job as a historian who lectures on Berlin, Germany’s urban development. When she returns on her break, Johannes has left. But a young man named Christoph (Franz Rogowski), who attended her lecture, has followed her to the café. When the massive aquarium tank above the bar explodes, it is the beginning of a new love for Undine.

Petzold remembers the fairy tale of Undine as told to him by his mother when he was a child. He considered the possibility of Undine breaking the curse intriguing --- she doesn’t want to kill her lover and go back to the forest lake --- she wants to love and be loved.

Beer and Rogowski were also the two lead actors in his well-received 2018 film, TRANSIT. I found them mesmerizing then, and they are even more so in UNDINE. Beer is quite a beauty and a terrific actor. She is exquisite in the opening scene as she silently weeps as Johannes confesses he is leaving her for another woman, and she continues to enchant the moviegoer throughout UNDINE.

Rogowski enjoys a distinct screen presence, as well. He’s not the most handsome man in films, but he possesses a certain quality that makes him infinitely attractive. This and his acting chops have presented him as a perfect candidate for a leading man.

Petzold and his cinematographer Hans Fromm have created a wonderfully magical movie experience. And the haunting piano accompaniment only adds to the mysterious allure of UNDINE. No matter what you may think of this woman in the lake myth, Petzold’s version is well worth your time.

In select theatres and on Digital and VOD platforms

If you’re a man, the lesson in this strangely fascinating film from Germany is don’t fall in love with a woman named Undine. Chances are if you leave her for someone else, she will be obligated to kill you.

This is all based partially on a Greek myth that has been portrayed in a variety of literary and cinematic fronts, including a 2009 film called ONDINE starring Colin Farrell. UNDINE is the latest version of the legend written and directed by Christian Petzold. It features two engaging German actors, Paula Beer as Undine and Franz Rogowski as her rebound lover Christoph.

The stage is set with Undine and her lover named Johannes (Jacob Matschenz) sitting silently outside a Berlin café. She is distressed because he is threatening to break up with her, to which she responds by promising to kill him if he does.

She leaves the café and warns Johannes to wait there for her as she goes to work across the street. Undine is a historian tour guide for the city of Berlin and gives 30-minute talks to small groups of visitors.

From her vantage point through a window, we see that Johannes has not heeded her demand and has left.

The scene shifts to Undine now inside the café where a young man named Christoph approaches her because he enjoyed her just completed talk. The two bond instantly over a shattered aquarium in the café and become lovers in very short order.

From the outset we are left wondering if Undine will follow through on her vow to do away with Johannes. Now that she and Christoph are a couple, how does that play into her threat? As I said, UNDINE is strangely compelling, drifting between reality and fantasy. Because of that we’re never sure what to expect. At one point I was ready to completely denounce the film because of what appears to be a highly improbable scene in a swimming pool, but that was before learning of the Undine myth.

There are no distractions in UNDINE which runs a brisk 91 minutes. The two lovers have virtually no one else in their lives --- no friends, no family, no romantic dinners or long car rides. Christoph does have a friendship with a woman named Monika (Iranian actress Maryam Zaree), his assistant while he plies his trade as an industrial diver. But we mainly see Christoph and Undine constantly caressing, hugging, kissing --- supremely in love. On that score, Rogowski and Beer are completely comfortable with one another, projecting a natural and credible partnership.

UNDINE features exquisitely subtle shots, as when Undine looks behind her while in Christoph’s arms because Johannes, holding hands with a woman, has passed them on a river walk. (Note the film’s promotional poster). And a marvelous CG effect of a massive catfish further blurs the line between reality and fantasy as we follow Christoph on his dives. The underwater scenes, according to Petzold, were heavily influenced by the iconic 1954 classic 20,000 LEAGUES UNDER THE SEA.

As the film unfolds, I found UNDINE to be a haunting modern-day love story/tragedy. If the movie seems odd, I encourage viewers to stick with it. One thing is certain --- Petzold’s script and the fine cast keep us guessing until the very last moment.

In select theatres and on Digital and VOD platforms