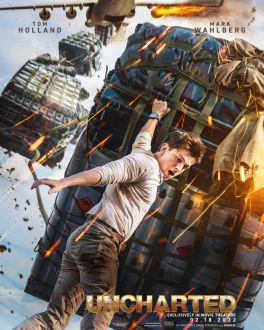 As much as I like Tom Holland --- and love Antonio Banderas --- UNCHARTED does neither actor any favors. And haven’t we had enough “buddy” films for a while?

Based on the very successful series of video games, “Uncharted”, created by Amy Hennig, developed by Naughty Dog and distributed by Sony, the movie follows the path of Nathan Drake (Holland) and Victor Sullivan, a.k.a. “Sully” (Mark Wahlberg), in their search for the massive amount of gold hidden by Magellan the explorer and his crew. They’re competing with Santiago Moncada (Banderas), the heir to the Moncada fortune --- the family who financed Magellan’s expedition --- and his rather ruthless “partner”, Jo Braddock (Tati Gabrielle).

All of this sounds like a lot of fun --- and it should be --- but it’s not. There are some amazing hijinks --- the opening sequence with Nate getting dragged out of a cargo plane sans parachute, fighting his way back in only to be hit by a car? Yes, you read that right --- a stunning vintage red Mercedes coupe, no less.

But all the special effects --- including flying Spanish armada ships --- cannot make up for the disappointing, unoriginal screenplay by Rafe Lee Judkins, Art Marcum and Matt Holloway. Even action-adventure films must have a decent script --- it can’t be all about the action.

These three writers have relied too heavily on friendly banter between Holland and Wahlberg that mostly falls flat. There is little chemistry between the two stars --- and even less with their female counterpart, Sophia Ali, who plays Chloe Frazer, one of Sully’s “associates”. Banderas, who can play a truly nasty villain, is so underutilized it’s maddening. Although, there is one startling moment between Moncada and Braddock.

Holland is great --- he really gives the role of Nate his all, but Wahlberg is less than convincing. It’s obviously all about the money for Sully, but even that doesn’t generate any sparks in Wahlberg’s performance.

Sony seems to be setting up for a sequel. Based on this installment, perhaps they should rethink their strategy. UNCHARTED isn’t awful, it just isn’t very good.

UNCHARTED is not a film that will linger in your memory once you leave the theatre --- or the comfort of your living room --- but it does have moments of reasonable entertainment. Mark Wahlberg and Tom Holland display a fair amount of chemistry as their characters try to solve clues leading to a treasure of gold. However, too often the wisecracks and tete-a-tete seem forced in order to generate a laugh.

The movie is absurdly over the top when it comes to stunts, particularly on the part of Nate Drake (Holland). Some of the action makes Tom Cruise’s MISSION IMPOSSIBLE theatrics seem plausible. On the other hand, the stunt sequences are well choreographed but even then, they can become tedious. It’s also a stretch that Nate --- despite a beefed-up Holland --- can conquer much bigger adversaries escaping with barely a scratch.

The two female leads are played by Sophia Ali (no relation to you know who) and Tati Gabrielle. Ali’s character is Chloe Frazer who flip flops her allegiance so much I lost track. Gabrielle plays Jo Braddock who co-leads along with Moncada (Antonio Banderas) a group of thugs also looking for Magellan’s buried gold. Braddock’s constant pursuit of Nate and Victor Sullivan, a.k.a. Sully (Wahlberg), becomes tiresome, as well.

UNCHARTED has more gimmicks than your average Bond movie, and the storyline about competing factions searching for the same treasure is a bit stale. Most egregious are the complex clues involving two precious crosses made of gold and jewels that are solved too easily, primarily by Nate.

This movie does not merit a sequel, but we will apparently  see UNCHARTED 2 based on the now widely used practice of “stingers” or “credit cookies”. You know them as scenes spliced into the film for viewing either before, during or after the closing credits which gives audiences a hint of what might follow.

escapism --- so don’t expect much.