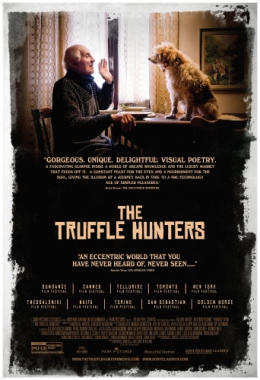 Greed and corruption seem to be everywhere, even deep in the forests of Piedmont, Italy. It is here, and only here, that one can find the white Alba truffle, the world’s most expensive ingredient and THE TRUFFLE HUNTERS who spend their lives in search of this elusive treasure. But truffle hunting is a dying art exacerbated by climate change and deforestation.

A few men in their 70s and 80s, along with heir trusted dogs, still forage for this delicacy which is more costly than gold. Each year the demand for white truffles continues to grow, but the supply is diminishing. Efforts have been made to cultivate other ways of growing these truffles with no success.

Written and directed by Michael Dweck and Gregory Kershaw, THE TRUFFLE HUNTERS is a fascinating and lyrical depiction of a simpler life, one unaffected by digital technology. These men, their dogs and their community exist in a sort of modern-day fairytale. Everything they eat and the clothes they wear are derived from the land and the forests around them.

They trust almost no one --- not even each other --- with their trade secrets and the locations of their best finds. They hunt at night without flashlights and the dogs are trained to sniff out the coveted prizes. It took months for Dweck and Kershaw, who filmed for three years, to gain their confidence. Time was spent just observing their daily activities and getting to know their families.

The world of truffle hunting is much like a private club, with the hunters holding the secret password. These men may be friends, as some have been for life, but they never reveal their secret truffle spots, not even to their wives, if they have one. Younger hunters have tried to replicate their efforts, but an untrained greedy individual can do much damage by picking a white Alba truffle too early, and/or desecrating a spot where they grow at the roots of tall oak trees.

One hunter named Sergio had a whole forest of 100-year-old truffle trees, where he regularly hunted, chopped down. When Sergio approached the man responsible and told him what he had done, he replied “Your truffles are not my concern.”.

Other hunters have had their dogs poisoned by competing hunters, which is beyond reprehensible. These animals not only provide much-needed assistance to the hunters in their quests, but they are also beloved members of their families, some with a higher ranking than the wives.

My personal favorite hunter in THE TRUFFLE HUNTERS is Aurelio Conterno, who is 84 and has no heirs other than his darling dog, Birba. She is constantly by his side --- even sitting on the table while Aurelio eats his dinner and shares his food with him, particularly the truffle dishes. Their relationship is so precious, and like most dog owners, he talks to Birba constantly. Aurelio’s biggest fear is not where he will find his next truffle but finding a woman to care for BIrba after he dies.

Another, Carlo Gonella, climbs out the window in the middle of the night with his dog, Titina, to hunt. His wife, Maria, is forever pleading with him to stop, even though she knows her cries fall on deaf ears. All the hunters profiled, there are five in all in THE TRUFFLE HUNTERS, provide Dweck and Kershaw with the rich fabric from which they weave this unique story.

THE TRUFFLE HUNTERS is a gorgeously photographed documentary. Both Dweck and Kershaw handled the cinematography, choosing rich, vibrant colors, utilizing subdued lighting all set up in single-frame shots, as if hand painted. Add to this the haunting original score by Ed Cortes and THE TRUFFLE HUNTERS qualifies as one of the most profoundly beautiful films of the year.

Before watching this unusual but fascinating documentary called THE TRUFFLE HUNTERS my only concept of a truffle was a piece of chocolate candy from Belgium. Eighty-four minutes later, I now know that white Alba truffles are fungi that grow inches under the ground, cannot be cultivated by man and specially trained canines are the diggers that unearth these treasures.

Afficionados of these edibles will pay large sums of money to satisfy the seemingly insatiable cravings of their palate and sense of smell. Purists add small slivers to eggs, rice and other dishes. In some scenes of THE TRUFFLE HUNTERS, we witness procurers haggling in dark alleys with users or possibly re-sellers as if an illegal drug deal were going down.

Filmed over a three-year period, THE TRUFFLE HUNTERS is proof positive that the law of supply and demand is undeniable.

A few hundred grams of quality truffles sells for upwards of 4000 euros or about $3300 at the current exchange rate. One extraordinarily special truffle brought over $100,000 at auction.

Prevalent in northern Italy, truffles have been a local but individualized “industry” for over 40 years. Once youthful excavators of truffles are now elderly men in their 70s and 80s and the passion for their work may perish with them as modern

climate change and deforestation are severely cutting into truffle availability.

Co-directors Michael Dweck and Gregory Kershaw not only co-wrote the screenplay, but they also did their own cinematography.

Once they gained the trust of the ageing hunters, Dweck and Kershaw were free to film these men going about their business. The beauty of that fact is that the hunters couldn’t care less about being in front of a camera. Most of them have never owned a TV, so there is no mugging for an audience or any other reality-show distraction to their profession.

Because canines are such an integral part of truffle hunting the pair outfitted dogs with small cameras around their neck --- like miniature Go Pros --- and added tiny microphones to pick up all the sounds. So, at times we see things from a dog’s perspective as they persistently scramble to dig up these delicacies.

Despite lifelong friendships truffle hunters guard their secret locations from everyone, wives and clergy included. We meet Aldo, 86, and Renaldo, 90, who have dined together every day since they were small children. But as Dweck points out, “never once have they shared their secret truffle spots”.

Since we (Jeanne and I) are loyal dog lovers, the four-legged diggers were especially significant in our enjoyment of this film. Along the way we meet Carlo and Titina, plus Aurelio and Birba (Jeanne’s favorite). In fact, Carlo and Titina help to close out the documentary in an especially poignant and amusing way.

Night hunting allows the men to maintain their digging locations without revealing any clues, but it is also unhealthy for elderly men to do so. After being berated by his wife one evening for continuing truffle hunting at his age, particularly at night, does Carlo listen? Not by a longshot. With Titina waiting patiently outside, the octogenarian gently opens a window and stealthily climbs through it until he reaches the ground, ready to resume his after-dark quest. This brief 30-second flourish puts an exclamation point on the devoted truffle hunters of Italy.

THE TRUFFLE HUNTERS has played at a slew of film festivals including Sundance, Cannes, TIFF and New York. The film will open in select theaters in New York and LA on March 5th --- not yet scheduled for streaming or rental.