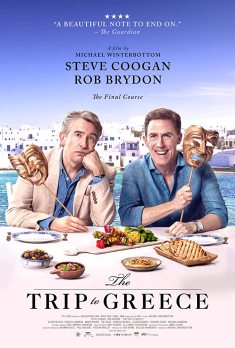 Beginning back in 2010 with THE TRIP, Steve Coogan and Rob Brydon have now completed their fourth in the series, THE TRIP TO GREECE. Continuing with the unorthodox idea of these two pals traveling to exotic areas to experience astonishing local cuisine in five-star restaurants surrounded by breathtaking vistas, THE TRIP TO GREECE is as fresh and engaging as the others.

In 2014 there was THE TRIP TO ITALY, followed by THE TRIP TO SPAIN in 2017, but somehow Coogan and Brydon manage to make their conversations and celebrity impersonations feel new and sparkling. THE TRIP TO GREECE begins in Turkey with the duo discussing their choice of following the path of Odysseus from Troy to Ithaca on this 6-day journey.

And as we join them on this odyssey, we are treated to visions of food, as artfully prepared and mouthwatering as any from the other trips. Every lunchtime gastronomical adventure is situated in an idyllic spot on the edge of a cliff overlooking the unbelievably clear and inviting waters of Greece.

revelry --- we are wowed by one gorgeous shot of mountains, water and spectacular terrain after another. THE TRIP TO GREECE is a virtual tour of the beauty of one of the most iconic destinations --- a glorious diversion that we can all use right about now.

wouldn’t --- there is always the option to press mute and just enjoy the film for its incredible scenery and scrumptious-looking food.

The Mediterranean cuisine prepared for Coogan and Brydon is so spectacular I wanted to weep. Greece is one of my favorite places in the world for food. Lamb chops placed precariously on a plate with mint sauce, halibut to die for and mussels with a sauce I wanted to swim in --- seriously, I was whimpering as we watched.

But whatever you do, do NOT mute these two nut jobs. Though we’ve witnessed their impersonations before --- and if you haven’t, they’re hilarious --- they still have huge entertainment value. Sean Connery, Mick Jagger, Keith Richards have never sounded better, but when Brydon impersonates Dustin Hoffman’s line “I’m walkin’ here!” from MIDNIGHT COWBOY, David and I almost fell off the sofa. David is always trying to do his best “Dustin” using that line, but ends up sounding like he’s from Boston (which David is) instead of the Bronx. Hearing Brydon do it is a real kick.

Coogan and Brydon are immensely talented, with Coogan reminding us that he’s won seven BAFTAs, much to Brydon’s chagrin. And now with both in their mid-fifties, they’re facing different life issues. Rob calls home to London to learn his wife has gone to the theatre, but doesn’t know with whom. And Steve learns that his father has become seriously ill. We know they’re having fun at each other’s expense, but that is the best part --- we are in on the joke.

Director Michael Winterbottom, who should be highly praised for his efforts in this entire series --- and keeping these two in line --- has mentioned that this will most likely be the last. After 10 years, that may be true, but like the Richard Linklater trilogy, BEFORE SUNRISE, BEFORE SUNSET and BEFORE MIDNIGHT, I never want them to end. I would jump at the chance to watch Coogan and Brydon for another 10 years!

If you missed the first installment of “The Trip” series (entitled THE TRIP, 2010), directed by Michael Winterbottom and starring Steve Coogan and Rob Brydon, you can still take in THE TRIP TO GREECE and enjoy it on its own merit. I always feel like I’m a fly on the wall witnessing these two very good friends  entertaining each other with their stories, and especially their spot-on voice impersonations of celebrities like Dustin Hoffman, Mick Jagger and Anthony Hopkins.

American audiences must pay close attention, though, as these two British comedians (Coogan is also a noted dramatic actor) fire off jokes and snippets of conversation in rapid fire bursts. Jeanne was ready to re-watch the film less than a day after the first viewing, not because she missed some dialogue, but because she loves these two together, along with the glorious scenery of Turkey and Greece. Speaking of missing something, I have since learned that early on in this film there is a monument to the Trojan Horse when the two stars were in Troy enroute to Ithaca.

THE TRIP TO GREECE plays like a documentary travelogue as it eschews a formal script. Most of the pair’s repartee is spontaneous, or so it seems. Coogan and Brydon share sumptuous meals at al fresco tables overlooking beautiful backdrops. They seem to be having as good a time regaling each other as we do watching them.

Coogan, who has won seven BAFTA Awards and tells us as much during the filming of THE TRIP TO GREECE, also had a leading role in the 2013 Oscar-nominated film PHILOMENA alongside Dame Judi Dench. It’s a wonderful movie, you should see it if you haven’t --- but I digress.

THE TRIP TO GREECE is the last in the series which also includes THE TRIP TO SPAIN (2017) and THE TRIP TO ITALY (2014). Both Brydon and Coogan were co-writers on “The Trip” TV series which focused on their Italian adventures and aired in Great Britain for six episodes in 2014.

Winterbottom is an accomplished director who knows how to keep an audience enthralled with virtually no action sequences. In one elongated lunch scene, the two stars are engaged in their usual back-and-forth when a pretty, young waitress almost stops them in their tracks. Winterbottom’s camera follows her incessantly as she moves from the kitchen to their outside table and back again. At one point she asks them if they want to “continue”, which is the Greek way of determining if they want dessert. It’s a quaint departure from their normal banter.

Unlike its predecessors, THE TRIP TO GREECE takes a rather sudden turn into serious territory. Coogan is in touch with his “son” Joe (Timothy Leach) back in England to inquire about the condition of his “father” (Richard Clews). Jeanne and I weren’t completely sure if Joe and his dad were actually part of Coogan’s family. The credits reveal they’re not, but the script by Winterbottom is sufficiently compelling that we sympathize with Coogan and his unexpected plight.

Obviously, THE TRIP TO GREECE has missed its cinematic debut in movie theaters thanks to Covid-19. However, it’s  tremendously engaging and currently available on demand for a small price.