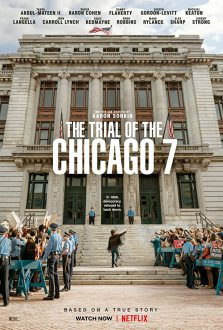 Aaron Sorkin’s brilliance in writing and directing is on full display in THE TRIAL OF THE CHICAGO 7. What began almost 13 years ago during a conversation with Steven Spielberg, who wanted Sorkin to pursue this project of “a crazy conspiracy trial that happened in Chicago in 1969”, has finally come to fruition --- and it couldn’t be more timely.

The summer of 1968 in Chicago was rife with protests. First, Rev. Martin Luther King, Jr. was assassinated in Memphis and then Robert F. Kennedy was murdered in Los Angeles. The Vietnam War had percolated to its pinnacle with more than 1000 U.S. troops being killed each month.

In August, the Democratic National Convention was scheduled and thousands of protesters from all over the country converged on the city. What was meant to be a series of peaceful protests turns into a bloodbath between the protesters and the police --- along with the National Guard.

In 1969, eight of the activists arrested during those protests on August 28, 1968, are put on trial for violating the Rap Brown Law --- an anti-riot act passed by Congress in April of ’68. Those eight men were: Yippies Abbie Hoffman (Sacha Baron Cohen) and Jerry Rubin (Jeremy Strong), SDS members Tom Hayden (Eddie Redmayne) and Rennie Davis (Alex Sharp), MOBE members David Dellinger (John Carroll Lynch), Lee Weiner (Noah Robbins) and John Froines (Danny Flaherty) and Black Panther Party Chairman Bobby Seale (Yahya Abdul-Mateen II), who wasn’t even at the protests, as he was only in Chicago for four hours to give a speech.

The trial was presided over by Judge Julius Hoffman (Frank Langella) --- no relation to Abbie --- a most entertaining scene cleverly written by Sorkin and executed by Baron Cohen and Langella. The lead prosecutor for the government is Richard Schultz (Joseph Gordon-Levitt) with William Kunstler (Mark Rylance) and Leonard Weinglass (Ben Shenkman) handling the defense for the defendants, except Bobby Seale.

His attorney had an emergency surgery and was unable to come to court and Bobby refuses to be grouped in with the other seven. This becomes a running issue in the courtroom with Judge Hoffman disallowing his pleas for a separate trial. In the meantime, his fellow Black Panther, Fred Hampton (Kevin Harrison, Jr.), is in court every day advising Bobby --- until the unthinkable happens.

Sorkin has delivered a well-conceived, fast-paced (one of the things I love best about his writing) account of one of the most heinous and controversial trials in American history. The trial itself began on September 24, 1969 and didn’t end until February 18, 1970, when Weiner and Froines were acquitted --- a foregone conclusion --- and the other five are sentenced to five years in prison and fined $5000 each. A mistrial was declared for Bobby Seale on November 6, 1969, after he suffered a brutal beating at the hands of the court officers ordered by Judge Hoffman.

As I mentioned, the timeliness of THE TRIAL OF THE CHICAGO 7 couldn’t be more important. As we watch what transpired during the summer of 1968 --- up to and including the spring of 1970 when four unarmed students were viciously gunned down on the Kent State University campus --- it’s a startling and depressing foreshadowing of what is happening today.

Even though these events are part of our country’s less-than-desirable history, many people simply are not aware of these defendants and this abject failure of a trial. And Sorkin takes full advantage of that lack of knowledge to craft a screenplay that is not only riveting, but also highly amusing.

Of course, many of the zingers belong to Hoffman, who goes around to college campuses to speak to raise money for their defense. Baron Cohen’s comedic timing is paramount as he delivers Hoffman’s chosen words. But it is Weiner who pipes up with “If this is the Academy Awards of protests --- I’m just happy to be nominated” when asked how he feels about being indicted. Hilarious ---

Just reading the list of names in this cast gives one a clue as to the formidable acting power on hand. Each of these actors has been perfectly placed in their roles. Baron Cohen actively pursued playing Hoffman and honestly one can’t imagine anyone else.

He and Redmayne’s clashes as Hoffman and Hayden are well documented, and they are equally masterful at pulling those off. When Hoffman declares that something is “so foreign to me”, Hayden quickly quips “so is soap”. And when Kunstler proves to Hayden that Hoffman would make the better witness on the stand, Hoffman offers an auspicious statement when queried about his thinking process “I’ve never been on trial for my thoughts before.”

Obviously, it isn’t just Baron Cohen and Redmayne who drive THE TRIAL OF THE CHICAGO 7. Sorkin has an embarrassment of riches populating his film. Abdul-Mateen II is especially powerful, as well as Strong, who is eerily like Rubin. Rylance and Langella are as good as they’ve ever been with a few explosive courtroom scenes which are memorable.

Michael Keaton has a small, but highly pivotal role as Ramsey Clark, the former Attorney General under President Johnson. His courtroom sequence is one of the best in the film. And Gordon-Levitt is quietly effective as the mild-mannered prosecutor totally aware of the sham being perpetrated.

It’s amazing how so many parts of Chicago still look the same as they did in 1968. Sorkin shot for nine weeks in the city and the areas of Grant Park across the street from the Hilton Hotel are as beautiful now as then. Direct of Photography Phedon Papamichael, who also did the remarkable shooting for FORD v FERRARI, and Editor Alan Baumgarten intercut their filming of the riots with actual footage from 1968, which are in black and white. Their superb work makes it all the more real --- and terrifying.

THE TRIAL OF THE CHICAGO 7 is a major accomplishment for Sorkin and his cast and crew. It will be remembered as one of the best of 2020 --- if not the best. In the year of a pandemic --- and racial and political unrest --- it’s a sobering admonition that should not be missed.

Featuring an all-star cast and a script from Aaron Sorkin, who also directs, THE TRIAL OF THE CHICAGO 7 is completely enthralling from start to finish. The Netflix release immediately establishes itself as a leading contender for Best Picture of 2020.

The Vietnam War protests of the 1960s reached new heights in 1965 when President Johnson announced a major surge in U.S. troops. This escalation in the most unpopular war in American history gave added momentum to anti-war groups like Students for a Democratic Society (SDS), The National Mobilization Committee to End the War in Vietnam (The MOBE) and The Youth International Party (Yippies). As a result, individuals like Abbie Hoffman, Jerry Rubin, Tom Hayden and David Dellinger became household names. Along with Black Panther leader Bobby Seale and defense attorney William Kunstler, this is their story.

THE TRIAL OF THE CHICAGO 7 is the latest in a series of timely films with all its political implications and social unrest amid a presidential election only days away. The parallels between the George Floyd marches of 2020 and the Vietnam War protests of the 60s are painfully obvious. Peaceful demonstrations often lead to violence. Just as one could argue that police in Portland, Oregon were guilty of instigating trouble only weeks ago, so too was the Chicago Police Department under public indictment for fomenting the unrest of August 1968 during the Democratic National Convention in downtown Chicago.

The 129-minute running time literally flies by thanks to Sorkin’s compelling script and astonishing performances from his ensemble cast. The movie begins with prosecuting attorney Richard Schultz (Joseph Gordon-Levitt) meeting with former Nixon U.S. Attorney General John Mitchell (John Doman) to discuss the trial. The hard-driving Mitchell convinces a somewhat reluctant Schultz of the need to prosecute the Chicago protesters, and right away we are caught up with JGL’s no-nonsense approach to his role.

Sorkin’s film is happily strewn with former Oscar/Tony nominees and winners, including Sorkin himself for screenwriting (MOLLY’S GAME, 2017). Mark Rylance shows us why he is a world-class thespian as Chicago 7 attorney William Kunstler, who racks up double digit contempt-of-court citations issued by the combative Judge Julius Hoffman (Frank Langella). The frequent antagonistic eruptions between Kunstler and Judge Hoffman are a highlight.

Eddie Redmayne plays long-time anti-war activist Tom Hayden, a future California state senator and husband of Jane Fonda. It is Redmayne’s best performance since his Oscar-winning turn in THE THEORY OF EVERYTHING.

Sacha Baron Cohen perfected his Boston accent to portray Abbie Hoffman, the face of the Chicago 7 and co-founder of the Yippies. Baron Cohen has never taken on a role that intimidates him. BORAT and his “Da Ali G Show” on HBO are clear evidence of that, and his turn as Hoffman is no different.

Jeremy Strong, fresh off an Emmy win for his multi-layered performance as Kendall Roy on HBO’s “Succession”, is Hoffman’s best friend and fellow Yippie co-founder Jerry Rubin. One of the film’s producers commented that Hoffman and Rubin were rock stars in their time, knowing how to market themselves. “If they were around today, they would have had 10 million followers on Twitter”, says Stuart Besser.

The last of the major roles is turned in by Yahya Abdul-Mateen II as Black Panther leader Bobby Seale. Seale was in Chicago for a matter of hours but was arrested anyway along with the others, so originally the trial was about the Chicago 8. However, he was granted a mistrial and thus the Chicago 7 remained. Abdul-Mateen delivers a strong performance. The events surrounding his character are proof positive that the racism in this

The attorney who is second seat to Kunstler, Leonard Weinglass, is played by Ben Shenkman, and although his character has minimal dialogue, he possibly has the best single line in the film. In fact, each of the actors at one point or another has a signature moment that stands out. In the case of veteran character actor John Carroll Lynch, his David Dellinger, founder of MOBE, is generally quiet as the family man and voice of reason. But he explodes against Judge Hoffman late in the months-long proceedings and it is a stunning sequence.

Tony Award winner Alex Sharp is Hayden’s pal Rennie Davis, and his big scene occurs during one of the clashes with Chicago police in Grant Park. After a good portion of the film has past, Sorkin surprises us with a cameo from Michael Keaton as former U.S. Attorney General Ramsey Clark under LBJ, preceding John Mitchell. Keaton’s Clark is a heroic witness in Hoffman’s courtroom, eliciting a burst of applause from the defendants and the gallery. The courtroom scenes, which dominate Sorkin’s script, are imbued with realistic and compelling dialogue. Of course, if you’re a fan of Sorkin’s writing this comes as no surprise.

There is more to be admired in THE TRIAL OF THE CHICAGO 7 beyond the acting and the writing. Sorkin has called upon a host of collaborators from MOLLY’S GAME, his directorial debut. None of these are more critical than his Oscar-nominated editor Alan Baumgarten. Throughout the movie Baumgarten was tasked with the difficult job of intertwining actual footage from 1968 with scenes from THE TRIAL OF THE CHICAGO 7. Often these juxtapositions are mere seconds apart and they give the viewer unique and startling insights as to what actually occurred back in 1968.

THE TRIAL OF THE CHICAGO 7 is truly an entertaining, spirited and relevant film that touches on a whole range of emotions. This culminates with the articulate Hayden, who is pegged with being the spokesperson for the Chicago 7 at their sentencing, defying Judge Hoffman’s order to be brief. If this moment doesn’t induce chills, nothing will.