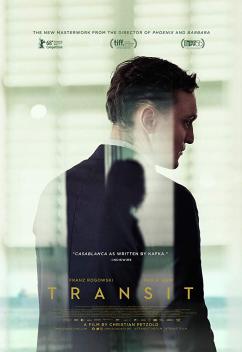 Based on the novel "Transit" by Anna Seghers, which takes place in 1940, writer/director Christian Petzold's film, TRANSIT, is set in modern-day Marseille. Though Petzold's creation will never be considered the "feel-good movie of the year", TRANSIT is a gripping visual of the plight of people in constant transition.

Georg (Franz Rogowski) meets a friend in Paris, who asks him to deliver a letter to a highly-regarded author holed up in a small hotel. The letter is from the author's wife who has left him, but now wishes him to come and meet her in Marseille. Fascists are rounding up  people in the streets who don't have the correct citizenship documents. Georg, one of those people, barely escapes, and upon arriving at the author's hotel, finds that he has committed suicide.

He takes the author's papers and unfinished manuscript and assumes his identity. Fulfilling another promise, he accompanies another friend, who has been severely injured, to Marseille. They manage to secure a small compartment in a train boxcar and remain hidden the entire journey. Unfortunately, the friend succumbs to his injuries and Georg must find his family to inform them.

Arriving at the address, Georg finds the man's young son, Driss (Lilien Batman), home alone. The child is clearly starved for attention and Georg takes it upon himself to spend some time with him kicking around his deflated soccer ball. When his mother, who is deaf, returns from work, Georg explains what has happened to her husband, while Driss communicates via sign language.

In the days that follow, while Georg is awaiting his "transition" to Mexico using the author's prearranged passage, Georg and Driss become closer. When Driss suffers an acute asthma attack, Georg finds a doctor, Richard (Godehard Giese), also awaiting passage, and his lover, Marie (Paula Beer).

Georg has seen Marie wandering the streets, only to learn from the Mexican Consul (Alex Brendemuhl) that she is the wife of the dead author. Her guilt at leaving her husband compels Marie to continuously search for him. Georg is immediately smitten and thus offers his documents for the next ship to Richard so he can stay behind with Marie.

Because of the subject matter, people fleeing a ruthless regime in modern time, TRANSIT reflects much of what is actually happening worldwide today. Georg complains of not wanting to hear everyone's sad stories, but in reality he can't get away from it. Sadness and desperation permeate the air --- there is no escape.

Though in her novel Seghers uses a first-person narrative, Petzold has chosen to utilize a narrator, whom we later find out is the bartender at the little cafe in Marseille which Georg, then Georg and Marie frequent. He is the one constant in Georg's otherwise tragic existence. While everyone else around him disappears from his life, the cafe and its barkeep sustain him.

Despite the fact that I regard TRANSIT as overwhelmingly depressing, there are many lovely scenes. Georg and Driss' friendship is especially touching --- at one point he sings "Abendlied", ("Evening Song") to Driss, a moment so beautiful his mother asks Georg to repeat it, even though she cannot hear his music.

Most important are the brief, but tender scenes between Marie and Georg. Petzold considers TRANSIT foremost a love story. His ending may leave you with questions unanswered, but that will not negate the beauty in the performances rendered.

It took me a while to warm up to Rogowski as the heart of this movie, but after a short while, I can appreciate what Petzold obviously saw in him to play Georg. His portrayal as a man on the run, unsure of where he'll end up, is effortless. And his chemistry with Beer is undeniable. At 22, she is mesmerizing as this seemingly fragile yet duplicitous woman who cannot forgive herself.

Typically, my favorite performance is usually by the child, and Batman doesn't disappoint. He's never overly precocious, just a sweet, lonely boy who yearns for a father figure in his life, but won't allow himself to be used either. He's heartbreaking even in his silence.

The writing is always an issue for me and Petzold has penned a hauntingly memorable screenplay adaptation. He has made this story his own with the change to modern day. And though we never actually see any evidence of a "war", we know it exists when we look into the eyes of these refugees --- and listen to their stories.