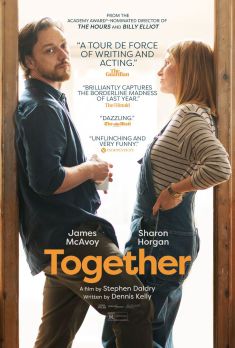 A recurring theme throughout my reviews has always been --- “it’s all about the writing”. And I cannot stress enough the importance of good writing when contemplating a film about a couple on lockdown with their 10-year-old son during the COVID-19 pandemic.

TOGETHER is billed as a comedy, but there are many moments when this story is decidedly not funny --- other times, it’s downright hilarious. Not everyone will appreciate the sterling original screenplay by Dennis Kelly, but it is remarkably believable, especially when two people find themselves no longer in love --- if they ever were.

March 24, 2020 begins the lockdown in England. She (Sharon Horgan) and He (James McAvoy), who shall remain nameless throughout TOGETHER, share an upper middle-class home in London with their son (Samuel Logan). They argue so much that they can’t even agree on what to call him. She prefers Arthur, while he insists upon Artie, which drives her crazy.

Long ago these two realized they couldn’t stand one another, but they stayed together for Arthur. Now they’re facing an uncertain amount of time in a house together, with no one leaving --- at all. Kelly has captured the absurdity of the situation with razor-sharp barbs and heart-rending monologues. Of course, not everyone who survived this past year with a partner experienced such disdain, but I know for a fact that many have --- and I’m not referring to us, David (or am I?).

TOGETHER was filmed over 10 days after 10 days of rehearsal in this house which becomes another character. Directed by three-time Oscar nominee Stephen Daldry, whose impressive resume includes BILLY ELLIOT, THE READER, THE HOURS and “The Crown”, it became imperative that the seven scenes be perfectly staged in certain locations within the home to allow for the rapid-fire dialogue.

Both McAvoy and Horgan give astonishing performances. At times speaking directly to the audience, each of these gifted actors is required to deliver extended monologues as if on a stage and they are both brilliant. Horgan is especially effective as she relates to her partner the incredibly moving story of her mother.

The saddest element though of TOGETHER is that these two people are initially so angry and hateful toward one another that they are totally oblivious to the presence of Arthur. He listens to their quarrels from the stairs, behind the drapes --- one can only imagine what is going through the poor boy’s head. And as TOGETHER takes place over the course of an entire year, who

knows how much damage has been done?

Kelly’s and Daldry’s take on the effects of a lockdown gives us a lot to ponder. Near the end of the movie, there is one oration in particular which offers up the idea that nothing will change --- that we humans haven’t learned anything, and we will return to our impatient, hurried ways. Dear lord, I certainly hope not.

At first glance, at least for the first 20 minutes or so, TOGETHER seems more suited as a play off Broadway. The entire cast consists of an unmarried couple --- unnamed --- and their 10-year-old son, Arthur or Artie. He (James McAvoy) prefers Artie while She (Sharon Horgan) likes Arthur.  They are beginning Day One of a Covid-related lockdown, and their conversation is acerbic, accusatory and about as hostile as it gets between two people living under the same roof.

The reality of TOGETHER is that the entire 92 minutes takes place in the couple’s home, primarily in the kitchen. The film was shot in 10 days after 10 days of rehearsal. Lest you think a high-caliber cinematographer was not needed, three-time Oscar nominee and director Stephen Daldry (BILLY ELLIOT, THE HOURS, THE READER, “The Crown”) hired Iain Struthers as his chief cameraman. Their biggest challenge was deciding when the actors should be looking directly into the camera and when they should have a normal conversation with each other.

Jeanne’s mantra has never wavered: “It’s all about the writing!” In this case, the original screenplay by Dennis Kelly stands up well to her scrutiny. Two marvelous performances by McAvoy and Horgan intuitively echo the sentiments of many people affected by the pandemic, so it makes sense that many folks won’t have a problem relating to the intense dialogue.

McAvoy and Horgan make it look easy --- we feel like we’re watching a documentary, at times, and at other moments we are privy to a private discussion that frequently gets very intimate. Horgan’s character talks emotionally about her mother’s dilemma, and the good-hearted nursing home attendant named Jonathan --- whom we never see --- and his difficult decision.

McAvoy’s character acknowledges he has despised his partner, at times, yet feels differently as the story moves along. Arthur (Samuel Logan) is the reason they have stayed together this long, like many unhappy couples. The lad speaks no dialogue until the very end of the movie.

TOGETHER delves into the political arena, too, offering a scathing indictment of how poorly and casually the British government handled the pandemic after a full year. Daldry gives us periodic updates superimposed on the screen about the number of deaths in the U.K. as well as the numbers of vaccinated people.

Small details turn out to be quite interesting. For example, in the middle of one of his monologues, He is preparing some fried food on the gas stove while looking directly into the camera. It’s seemingly an insignificant addition to the script yet becomes one of the more memorable moments.

If you are open to an unusual hour and a half of no-nonsense dialogue delivered flawlessly by these two actors, TOGETHER is recommended.