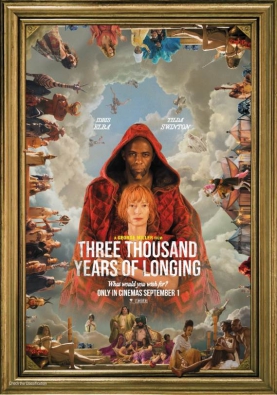 A sumptuous movie by Oscar-winning director George Miller, THREE THOUSAND YEARS OF LONGING represents quite a departure for the filmmaker known for the MAD MAX films. Based upon the short story, “The Djinn in the Nightingale’s Eye” by A. S. Byatt, Miller and his daughter, Augusta Gore, wrote the screenplay.

Dr. Alithea Binnie (Tilda Swinton) is a narratologist --- a student of stories --- all kinds of stories --- throughout the ages. While attending a conference in Istanbul, where she’s ensconced in the “Agatha Christie” suite at her swank hotel, Alithea purchases a lovely blue bottle at the local bazaar.

This rather unremarkable bottle has been the home of a very forlorn Djinn (Idris Elba) for 3000 years. He offers Alithea three wishes hoping to secure his freedom, but she, who feels supremely content with her life, doesn’t believe him and isn’t interested in asking for anything. Plus, she is also very aware --- as she is a scholar of stories --- that requests for wishes can go terribly wrong. Desperate to be free, the Djinn regales Alithea with tales of his past --- and how he came to be in his bottle for all those many years.

THREE THOUSAND YEARS OF LONGING is an absolutely gorgeous film. Much of the initial action between Alithea and the Djinn takes place in her hotel room, but as the Djinn weaves his own stories of intrigue and disappointment, the set designs and cinematography become visually stunning.

But it is the performances of Swinton and Elba that make THREE THOUSAND YEARS OF LONGING so enjoyable. They exude a fantastic ease with one another, and both are accomplished actors, rendering immensely thoughtful portrayals. Miller and Gore’s marvelous screenplay is partly responsible for their ability to perform, with Miller following their collective instincts.

David thinks THREE THOUSAND YEARS OF LONGING is a bit slow in parts --- he was probably sleeping. I didn’t bother to check because I was completely enthralled with the film, especially the mesmerizing score by Tom Holkenborg. Seriously, the music is so beautiful I wanted to weep --- and I did not want to leave the theater.

THREE THOUSAND YEARS OF LONGING is a most unusual film about the unlikely pairing of a female academic and a Djinn. As portrayed by two of our finest actors --- Tilda Swinton and Idris Elba --- plus some intricate special effects, we can almost believe Djinns, or genies, do exist. Plus, George Miller (BABE, MAD MAX movies) directs and co-writes the screen play with his daughter Augusta Gore. It was truly a labor of love for Miller. Based on a short story, THREE THOUSAND YEARS OF LONGING was many years in the making, including “roundtable workshops” with the actors and filmmakers. Miller met Tilden and Elba separately but knew he wanted both for this film.

Alithea Binnie (Swinton) is a respected narratologist and quite happy with her life as a single woman. When she stumbles on the blue bottle that releases the Djinn, he is a hulk of a being, but he manages to reduce himself in size. He wants his freedom after 3000 years and is willing to grant Alithea three wishes to get it.

However, she is reluctant to indulge this Djinn with any wishes at all. Alithea is not interested in a relationship, romantic or otherwise, much less with a Djinn. After so many years imprisoned in a bottle, the Djinn has never realized his own true wants and needs. Now he must convince her of his earnestness. Somehow, they connect on a very human level.

THREE THOUSAND YEARS OF LONGING is, of course, a fantasy, yet as we watch these two fine actors the story becomes a compelling one, namely how will this scenario play out? Swinton calls the movie a means “to reboot the narrative drive in our systems”. Elba wanted to film the Djinn’s past stories first to give him what he sees as “credentials” to portray a Djinn.

I would categorize THREE THOUSAND YEARS OF LONGING as a love story, well worth a true cinephile’s time. The beautiful score by Tom Holkenborg and stunning cinematography by John Seale, both of whom worked with Miller before on MAD MAX, FURY ROAD, should be enjoyed on the big screen.