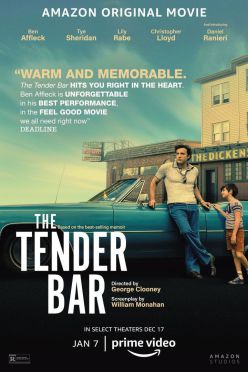 Pulitzer Prize-winning author J.R. Moehringer’s memoir entitled “The Tender Bar” about growing up in Manhasset, New York has been adapted by Oscar-winning screenwriter William Monahan (THE DEPARTED, THE GAMBLER), with George Clooney as director.

THE TENDER BAR begins in 1972, as nine-year-old J.R. Maguire (Daniel Ranieri) --- the J.R. just stands for “Junior” --- and his mother, Dorothy (Lily Rabe), have left New York City due to financial constraints and move back to her parents’ (Christopher Lloyd and Sondra James) rundown home on Long Island.

J.R.’s father, a radio DJ whom he calls “The Voice” (Max Martini), has been absent from his life since he was a baby. But not to worry, also living with his grandparents is J.R.’s mother’s brother, Uncle Charlie (Ben Affleck).

In need of some male companionship, J.R. is completely taken with his erudite --- and completely self-taught --- uncle, who tends bar at the local pub called The Dickens. It’s a comfy old dive where the walls are lined with books just like Charlie’s closet at home.

Immediately recognizing that J.R. has no aptitude for sports, Charlie encourages J.R. to read --- a lot, as much as he can. Dorothy, who never went to college either, is determined to send her son to Yale so he can become an attorney. J.R. is happy to comply with the Yale part, only his chosen profession would be a writer.

As luck would have it, J.R. (now played by Tye Sheridan) does get into Yale on a scholarship. His two roommates, Wesley (Rhenzy Feliz) and Jimmy (Ivan Leung) help him navigate the transition to Ivy League, though J.R. always feels out of place. And of course, his first crush, Sydney (Briana Middleton), is way out of his league. She is very smart and comes from a wealthy family. At first J.R. is of interest, but she soon realizes he’ll never fit in to her desired lifestyle. Unfortunately, it takes years for J.R. to come to the same conclusion.

THE TENDER BAR is a sweet film about love and the importance of family --- in all forms. And it’s made all the more entertaining by the superb actors assembled, most notably Affleck. He’s absolutely perfect for the role of Uncle Charlie now that he’s a little older and his career seems back on track. He and Clooney have worked together before on ARGO and Clooney was convinced from the start that Affleck was the only one to star as this kind of renaissance man.

Affleck fits incredibly easy into the character of Charlie. He’s so good with both Ranieri and Sheridan --- very natural and believable. He dispenses sage advice like he pours his drinks ---with a lot of love and kindness. J.R. has been wishing for a father his entire life, but Uncle Charlie has always been there for him --- who could ask for a better “father”?

This is Ranieri’s first role, and he is terrific. He’s got that great East Coast accent and the acting chops of someone much older. His real-life mother, Danielle, even has a part playing J.R.’s aunt.

Sheridan has done his best work here since MUD. It’s a reminder of what a special talent he is, especially in the scene at The Dickens where he’s alone and drunk. His younger self, Ranieri, appears and scolds him for losing sight of his goals, reminding him that he wanted to be a writer, not a copy boy.

Rabe’s Dorothy is spot-on. She seems to be always scrambling to make life better for J.R. and herself, but she never loses sight of her plans for her son, and Rabe makes it look effortless. Grandpa Floyd is a hoot --- cheap and ornery, but he does love his grandson. In perhaps the best scene of THE TENDER BAR, he sheds his unkempt attire, dons a suit, looking rather spiffy, and takes J.R. to a father-son breakfast at his school. It’s a small role but Lloyd is marvelous.

Considering all of this, why isn’t THE TENDER BAR a better film? It’s good, it’s just not great. As an adult, J.R. confronts his father, but the sequence feels contrived --- too little, too late --- with no real resolution. Perhaps that’s the point, but the entire episode feels out of place.

Clooney’s efforts provide a wonderful vehicle for Affleck. Maybe that and the awesome soundtrack is enough. David will disagree, but what does he know?

The new George Clooney-directed film THE TENDER BAR is based on the memoir written in 2005 by J.R. Moehringer. The author is known as a Pulitzer Prize winner albeit not for his memoir, but for feature reporting while working for the Los Angeles Times. So, it’s a bit misleading when his Pulitzer is mentioned in the same breath as the film because while the movie is relatively entertaining, it doesn’t reach the status of something as prestigious as a Pulitzer Prize.

THE TENDER BAR is clearly a film that belongs to Ben Affleck who plays Uncle Charlie to a fatherless young boy, J.R., who transcends into adulthood under his watch. Charlie tends bar at a neighborhood joint called The Dickens in Long Island, and young J.R. (portrayed by eight-year-old Daniel Ranieri) becomes a favorite of the three barflies who spend most of their waking hours there.

When J.R. eventually grows into young adulthood (Tye Sheridan), his life appears to be in upheaval even though he has been admitted into Yale on a scholarship and is dating a beautiful girl. His mother (Lily Rabe) tries to discourage him from his dream of becoming a writer, and his grandfather (played by Christopher Lloyd), who owns the home where J.R. and his mother dwell, is a crusty but likeable old man who thought he had earned enough money to retire comfortably.

THE TENDER BAR is a slice of life film that may or may not be to everyone’s liking. It represents a reunion of Clooney, Affleck and Grant Heslov who collaborated on the Best Picture winner ARGO from 2012. But it’s easy to appreciate Affleck’s turn here as the concerned uncle who encourages his sister’s son at every turn.

Young Ranieri is so accomplished in his movie debut that I was a bit disappointed to see him replaced in the film as his older self. That’s not to take anything away from Sheridan who does a fine job trying to reconcile why his DJ father, known as “The Voice” (Max Martini), has abandoned he and his mother.

THE TENDER BAR feels a bit self-serving because how much do we really care about Mr. Moehringer’s memoir? His book gets rave reviews from a variety of sources so it’s not a stretch that the film could not maintain the same depth of emotion. The movie is decent, but it is not a memorable piece of work.