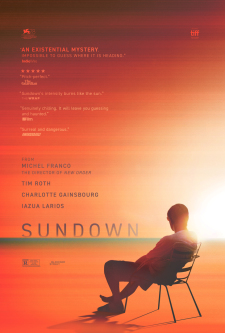 SUNDOWN is a clever thriller from writer/director Michel Franco who spent a lot of time in Acapulco, where the film is set, when growing up. In its heyday, Acapulco was the place to be seen in Mexico. Unfortunately, since then it has changed into a place of violence, which Franco incorporates into his story.

It is imperative that they return to London immediately, for multiple reasons, one being the management of their family business. But when the foursome arrives at the airport, Neil announces he’s forgotten his passport in the confusion. Instead of returning to the resort where they had been staying, he asks his taxi driver to change course and take him to a completely different part of the city.

One day turns into several with Neil eventually not responding to Alice’s calls at all. He meets Berenice (Iazua Larios), a local vendor, and begins a casual friendship. As weeks pass and his relationship with Berenice becomes more serious, Alice returns with her solicitor, Richard (Henry Goodman), to sign papers relinquishing his shares of the business. When tragedy strikes a second time, Neil must deal with the consequences.

SUNDOWN isn’t exactly a fast-paced thriller, but the twists and turns do pack a punch --- and they don’t stop until the very end. Roth has worked with Franco before on two other films, and Franco wrote the part of Neil for Roth --- and he’s perfect. It’s an incredibly laidback performance, including times when one just wants to shake him so he’ll be more responsive. But, alas, that is not to be, and the final scenes make it all the more obvious.

Gainsbourg is simply the consummate actor no matter what role she is given. Alice’s character isn’t a big part of SUNDOWN, but she’s acutely pivotal. It’s apparent she’d like to smack Neil for the many aggravations she’s endured, but that isn’t how Alice is written --- so Gainsbourg takes it in stride.

As I’ve written too many times to count, it’s all about the writing and Franco has penned an intriguing, devastating familial tale, worth a view.

It appears that Tim Roth’s character in SUNDOWN is experiencing a mid-life crisis. However one analyzes it, Neil takes advantage of a family crisis to disengage himself from the family members --- Alice (Charlotte Gainsbourg), Colin (Samuel Bottomley) and Alexa (Albertine Kotting McMillan) --- with whom he is vacationing in Acapulco.

After the others depart, he becomes involved with a much younger woman named Berenice (Iazua Larios) who sees something in Neil that is not clear to the viewer. They engage in what appears to be mutually enjoyable sex, they walk hand-in-hand on the beach and drink a lot of cerveza. Somehow this scenario is enough to warrant our interest.

Writer/director Michel Franco, who vacationed often as a child in Acapulco, is concerned about the violence that has taken over this once-pristine tourist attraction. An on-the-beach killing of a male by young hoodlums bearing firearms illustrates the deadly trend. We never learn if this murder is random or targeted. Neil is also mildly threatened by smart-ass thugs as he sits on the beach.

Gainsbourg may be most remembered for her eye-opening turn in NYMPHOMANIAC (2013), but here her role is much smaller, yet still effective. Roth is a compelling figure in whatever film he appears, and his Neil is no exception. He eschews the money that he and Alice have inherited from their meat-packing business. He lies about losing his passport to avoid involvement in a family crisis. Yet there is something about his demeanor --- hard to describe --- that makes this movie appealing.