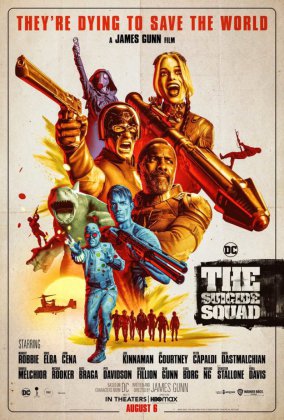 For the wildest ride in the theater this summer thus far --- and I can’t imagine anyone topping this --- THE SUICIDE SQUAD, written and directed by James Gunn, should be your first choice. Boasting a blockbuster cast of DC misfits, this uber-violent, often hilarious “See It Now!” on the big screen is definitely worth the investment, despite its two hour and twelve-minute run time.

The wily and mean-spirited Amanda Waller (Viola Davis) has assembled quite the motley crew from the Super-Villains she houses at Belle Reve prison, the penitentiary with the highest mortality rate in the U.S. Her top secret Task Force X is being sent to the (fake) island of Corto Maltese, which recently experienced a coup --- and every member of the president’s family was hung.

Naturally these crazies are sent to protect U.S. interests --- namely that the new regime doesn’t threaten our country with Starro, a 150-foot-tall starfish with killer instincts sequestered in Jotunheim, an appropriately dire cylindrical fortress built by the Germans close to the end of World War II. It is here that mad scientist Thinker (Peter Capaldi), whose head sports a variety of protruding instruments, experiments on Starro with human dissidents as bait.

As luck would have it for Harley Quinn (Margot Robbie), the new Presidente General Sylvio Luna (Juan Diego Botto) is a very handsome bachelor, who is obsessed with her. Expecting to make Harley his queen, he invites her --- all scrubbed clean and dressed like a princess --- to his palace. In one of the funniest --- and more surprising twists --- she decides he’s not her type.

Remembering this is THE SUICIDE SQUAD --- “They’re Dying to Save the World” --- not all of these wacky characters will survive, but it is a hysterical bloodbath along the way. I don’t know how it’s possible, but I think Gunn and his immensely talented crew devised even more grotesque ways of maiming and killing people.

While that may not sound enjoyable to all, watching the assembled cast of Idris Elba (Bloodsport), John Cena (Peacemaker), Joel Kinnaman (Colonel Rick Flag), David Dastmalchian (Polka-Dot Man), Daniela Melchior (Ratcatcher 2 and her adorable super-rat Sebastian), Sylvester Stallone (Nanaue, aka King Shark) and especially Robbie --- along with a whole host of others --- is the best case for experiencing Gunn’s outrageous take on one of his favorite groups in the DC Comics.

And while all these actors are truly marvelous in their respective roles, I am most impressed by Dastmalchian. Polka-Dot Man is quiet, downtrodden --- without a friend in the world until he becomes part of this band of killers. He loathes his mother --- hilarious --- and uses that hate to his advantage. And with Dastmachian’s unique look, he projects these traits perfectly. David and I met him years ago at the Chicago Critics Film Festival after a screening of his independent film ANIMALS (2014) and he could not have been nicer. He’s had a varied, successful career and playing Polka-Dot Man definitely adds to that.

It goes without saying that THE SUICIDE SQUAD is not for children. And yet you know people will be tempted. Please don’t --- it could be responsible for nightmares for years to come. That said --- if you’re an adult with a penchant for blood, gore and hilarity combined, don’t miss Gunn’s homage to these maniacal villains.

If you’re thinking a big-budget film featuring a gigantic fearsome starfish and a star-studded cast playing primarily despicable characters cannot be entertaining, think again. THE SUICIDE SQUAD is so absurd and so violent one could surmise that it might not survive the wrath of film critics and moviegoers everywhere.

However, in the capable hands of writer/director James Gunn (GUARDIANS OF THE GALAXY franchise), this gruesomely vicious movie deserves a huge amount of credit if for nothing else than its massive ambition. Many of the film’s sequences required over four months to complete.

If seeing the top of a man’s head being sliced off or countless eyes gouged with sharp objects or hatchets buried in foreheads are not your cup of tea, don’t bother. But absurdity is frequently funny, and THE SUICIDE SQUAD has the added benefit of audiences not really caring if one of the anti-heroes meets his or her demise. Without an acute sense of humor, Gunn’s vision of the wicked inmates of the brutal Belle Reve prison would be unintentionally funny.

Indeed, the mission of these violent-but-gifted people, along with a talking half-shark/half-man and a trained rat, becomes almost secondary as we are agog with the colorful sights and sounds of what looks like THE WILD BUNCH on steroids. Gunn does pay homage to that classic 1969 film which influenced him in the making of this movie.

Headlining the all-star cast are Margot Robbie, Idris Elba, John Cena and Viola Davis with smaller turns from Nathan Fillion, Michael Rooker, Pete Davidson, a voiceover by Sylvester Stallone (he’s King Shark) and even a cameo by Taika Waititi of JOJO RABBIT fame. Robbie reprises her role as the daffy-but-deadly Harley Quinn from earlier films, and Davis is also back as Amanda Waller, the U.S. Intelligence officer that you do NOT want to cross.

Elba (Bloodsport) and Cena (Peacemaker) are on the same side but natural rivals who provide most of the comic relief --- something sorely needed sitting through this movie. Bloodsport criticizes Peacemaker for wearing a helmet that looks like a toilet seat and for sporting, in one scene, nothing but his “tighty whities”. These two guys share comedic chemistry and prove to be very amusing.

Other cast standouts include Joel Kinnaman who reprises his role as Colonel Rick Flag and David Dastmalchian as the poker-faced Polka-Dot Man who --- believe it or not --- shoots deadly polka dots from his body. He also has a “mother complex” which is quite hilarious. Peter Capaldi, a former Dr. Who from the famed sci-fi program, is Thinker, the madman who conceived the starfish “program” and has multiple electrode-like objects protruding from his head.

Daniela Melchior is Ratcatcher 2 --- the Pied Piper of Hamlin has nothing on her. She can summon thousands of rats simply by holding up a lighted wand. Her constant companion is Sebastian --- a real rat --- not a CGI effect --- “played” by two trained rats who wear a specially fitted backpack. In one of the film’s tender moments --- yes there are some --- Ratcatcher 2 befriends King Shark who sadly proclaims his loneliness.

Gunn gets the movie off to a compelling start when he focuses his lens on Rooker as the inmate Savant sitting alone in his prison yard sporting long gray hair, squeezing a rubber ball. An unfortunate little bird enters the picture with disastrous results, but if you look closely later, Savant will get his just desserts courtesy of the little bird’s “cousin”. This is a sign that Gunn has some justification for his violent stunts.

And then there’s the giant starfish who stampedes around the fictional island of Corto Maltese --- off the coast of South America --- like an out-of-control T-Rex stomping everyone and everything in its path. This amusingly horrifying monster has the ability to spew out baby starfish who glom onto the faces of humans, thus creating a race of two-legged zombie starfish. Did I mention that Gunn has a fertile imagination?

Fortunately for the people of Corto Maltese, Task Force X --- the euphemism given to the group of misfits --- has a super weapon in the form of the indomitable Harley Quinn. Armed with only the javelin she claimed from the deceased anti-hero known as Javelin, Harley springs into action to possibly save the day. Robbie, who performs many of her own stunts, seems to be having the time of her life in this role, and we can’t take our eyes off her.

THE SUICIDE SQUAD is as deserving of an R-rating as any movie, but it’s all in the name of campy fun. If you can endure the early sadistic horrors, it’s worth hanging around for the rest of it.