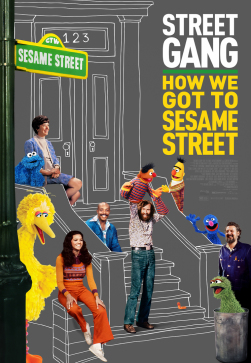 The late 60s was a revolutionary time, not just because of the war in Vietnam and politics, but on almost every front, especially entertainment. It was then that a few in the TV industry had the brilliant idea of creating educational content for 3-5-year-olds with a strong focus on inner-city children.

Based on Michael Davis’ New York Times best seller, “Street Gang: The Complete History of Sesame Street”, director Marilyn Agrelo and her crew have produced a fascinating documentary, STREET GANG: HOW WE GOT TO SESAME STREET, about the inception and creation of the most successful children’s TV program on the planet. Joan Ganz Cooney, a television executive, and Sesame Workshop co-founder Lloyd Morrisett wanted to develop a show for children that didn’t talk down to them but was still impactful and fun. Another goal was to make it equally entertaining for parents.

Enter Jon Stone, an acclaimed writer and director for children’s television who was responsible for creating that most iconic set which became “Sesame Street”. He’s also credited with asking the musical director, Joe Raposo, to write a song for one of Jim Henson’s most popular Muppet characters, Kermit the Frog, to sing when he, Kermit, was being quiet.

As Raposo tells it, in one of the many interviews in STREET GANG: HOW WE GOT TO SESAME STREET, he sat down at his piano and the memorable song “It’s Not easy Bein’ Green” immediately came to him. It was an instant hit and even gained some traction as a song connoting civil rights.

Of course, Henson and Frank Oz were instrumental in the huge success of “Sesame Street” with their Muppet puppets. The archival footage of them working their beloved creations behind the scenes is awe-inspiring and delightful. Who doesn’t LOVE these characters?

The most touching moments in STREET GANG: HOW WE GOT TO SESAME STREET revolve around the passing of actor Will Lee who played the loveable and very popular Mr. Hooper. Instead of simply bypassing his death, the producers of the show made the wise decision to address his death with the human cast trying to explain his passing to a very puzzled Big Bird. As the players struggled themselves with their own emotions, they answer Big Bird’s questions --- no, he’s not coming back --- and tell Big Bird that it’s okay to feel the way he does --- as they all do --- sad.

Agrelo utilizes more than 20 interviews and never-before-seen behind the scenes footage. It’s a treasure trove of all the things you’d like to know about “Sesame Street” and how it became the worldwide phenomenon it is.

After 50 plus years and expansion to more than 150 countries, Joan Ganz Cooney’s bold experiment to teach kids math and the alphabet via TV is undeniably a bigger success than she and her amazing co-creators could have imagined.

What do Dinah Shore, Stevie Wonder, Muhammad Ali, Johnny Cash, Dizzy Gillespie, Dick Cavett, Loretta Lynn, Orson Welles, Johnny Carson, James Earl Jones, Jessie Jackson Jr., and Paul Simon have in common?  They all appear in one way or another in a new documentary about the beginnings of the beloved children’s program “Sesame Street”.

It’s called STREET GANG: HOW WE GOT TO SESAME STREET. Directed by Marilyn Agrelo, the aforementioned stars were either guests on the early shows or were interviewees on another TV outlet. But as we watch this delightful film our wonder grows with each new celebrity appearance.

Most of us would quickly name Jim Henson when it comes to anything involving Sesame Street. But his biggest impact would come later with “The Muppets”, along with Frank Oz, until Henson’s untimely death in 1990 at the age of only fifty-three. This documentary centers on one of the founders of “Sesame Street” over 50 years ago.

Television producer Joan Ganz Cooney and Carnegie Foundation VP Lloyd Morrisett saw a need for a television program aimed at preschoolers that would hold their interest by being educational and entertaining at the same time. They particularly saw a need to engage inner city children. A combined grant of $8 million ($56 million in today’s world) led to the initial “Sesame Street” in November 1969.

STREET GANG: HOW WE GOT TO SESAME STREET is a tribute to the people who were the pioneers of a program that has grown exponentially throughout the world. Jon Stone was a writer and executive producer on “Sesame Street” but he is most prominently featured in the doc for being the director for 25 years.

Stone was totally impassioned with the program and despite fighting severe depression his whole life, he won a staggering 18 Emmys. Under his leadership, iconic household characters like Big Bird, Oscar the Grouch, Bert and Ernie, Kermit the Frog and many others might not have thrived without him.

Much of this film is told in flashbacks with archival footage featuring many of the initial participants who are no longer with us. Matt Robinson, for example, was a Black performer who dealt with race issues for years --- on a child’s level --- but complaints from Black viewers about his methods led to his leaving the show.

There is also a somber sequence where the cast is mourning the 1982 death of Will Lee who portrayed the beloved Mr. Hooper. They discuss how they should convey this to the kiddies. Ultimately the group settled on the notion that “he’s not coming back” and Stone used Big Bird as the conduit through which the message would be forthcoming.

As the puppeteer of Big Bird and Oscar the Grouch, two of the show’s most treasured characters, Carroll Spinney is interviewed extensively. He passed away in December of 2019 at age eighty-five. We also hear from the now adult children of Stone and Henson, plus the late  musician Joe Raposo.

Raposo, seen in black-and-white footage at his piano, composed countless songs for Sesame Street including “It’s Not easy Bein’ Green” (Kermit’s signature anthem) and “C Is For Cookie” (of course,  Cookie Monster’s tune). Norman Stiles, now the retired head writer for “Sesame Street”, opines that he couldn’t imagine getting a job as a young comedy writer for the Johnny Carson show, but ended up on “Sesame Street” for almost 25 years.

The overriding message we receive from STREET GANG: HOW WE GOT TO SESAME STREET is that the cast and crew was one big happy family. Just ask the cameraman with a Brooklyn accent. And a special moment during the closing credits has Paul Simon playing his guitar and singing to a small Black girl who is intent on showing him up with her own song. If you think Simon isn’t having a good time --- you’re not paying attention.

The documentary saves what is arguably the most heartwarming aspect of the show for the finale. We are privy to three and four-year-olds interacting with the puppets in short bursts of Q & A’s. The kids are convinced the puppets are real, especially since the

puppeteers are several feet below the children, out of sight working their voice and hand magic. Too precious for words!