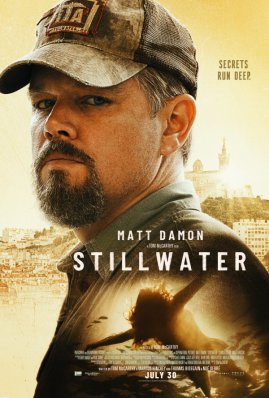 From one of the best writer/directors on the planet going back to THE STATION AGENT (2003), Tom McCarthy’s latest, STILLWATER, starring Matt Damon, has an interesting take on the 2007 Amanda Knox case. In that scenario, Ms. Knox was convicted of murdering her study-abroad roommate in Italy. Here Damon’s character, Bill Baker, is trying to free his daughter, Allison (Abigail Breslin), who is in prison in Marseille, France for killing her lesbian lover while also studying abroad.

McCarthy began working on this project 10 years ago, but after the initial draft, he shelved the screenplay for seven years. He then reached out to the French writing team of Thomas Bidegain and Noé Debré who helped him flesh out this story of a man, Baker, from Oklahoma --- a fish out of water --- as he tries to navigate the very different world of Marseille.

Interestingly, this second writing process began in 2016, and we all know how differently Americans were regarded abroad during the Trump era. Imagine an unemployed roughneck, who speaks no French, attempting to get his daughter out of prison five years into her nine-year sentence.

There is no new real proof, other than a conversation overheard at a party, that Allison is innocent, but that doesn’t stop Baker from seeking out the young man who supposedly claims he was responsible for Allison’s lover’s murder. Enlisting the help of a French stage actress, Virginie (Camille Cottin), who speaks English, and her eight-year-old daughter, Maya (Lilou Siauvaud), Baker has found a new purpose in his life, and he is determined to see Allison go free.

Admittedly, watching STILLWATER  was difficult at first. David and I have an only daughter who studied abroad in Paris for a spring semester and then spent the summer in Marseille as an au pair. Granted, she wasn’t involved in a murder, thankfully, but the entire concept of this gruff good ole boy strutting around France in the same baseball cap --- which never seemed to get dirty or acquire sweat stains (really?) --- trying to bully his daughter free made me cringe.

But as STILLWATER progresses, Baker seems to be making efforts to truly change. He and Maya have developed a deep and loving friendship --- something he did not have with Allison --- and Virginie has opened up many new worlds to him, including a meaningful romantic relationship. It is in this way that McCarthy and his co-writers, including also Marcus Hinchey, redeemed their screenplay originally intended as a Mediterranean Noir.

Damon is good, but it is the women --- and Siauvaud --- who make STILLWATER. Breslin was six when she was cast as Olive in LITTLE MISS SUNSHINE, years before it was actually filmed. She was nominated for Best Actress in a Supporting Role much like a similar nod for Siauvaud may be in the works, she is that good. Her scenes with Damon are the best in STILLWATER.

The multi-faceted Cottin plays Virginie with splendid ease and believability. One of the best lines has her friend asking Baker if he voted for Trump --- and then his confirmation that he owns two guns in Oklahoma. Her reaction is priceless and pretty much sums up what people in other countries think of Americans. And for those of you who are “Killing Eve” fans, Cottin portrayed the enigmatic Heléne in the last season.

I cannot write that I loved STILLWATER, but it does have its moments of clarity regarding love, acceptance and most importantly --- TRUTH!

Most fathers will go to any length to protect their child. But when that child has been convicted of murder in a foreign country and sits in a foreign jail amid a nine-year sentence, the situation presents an even greater challenge than normal.

Such is the dilemma of Bill Baker (Matt Damon), an unemployed oil-rig roughneck in Oklahoma struggling with his own demons of alcohol and drug abuse. When his mother-in-law, Sharon (Deanna Dunagan), beseeches him to look into his daughter Allison’s (Abigail Breslin) claim of innocence --- Sharon can no longer travel to the prison in France --- Bill must find the fortitude to get his act together and help Allison however he is able.

Such is the intriguing story of STILLWATER, co-writer and director Tom McCarthy’s latest film. The Oscar-winning McCarthy boasts movies like THE STATION AGENT, SPOTLIGHT, THE VISITOR, WIN WIN and UP on his resume, all of which raise the bar for movie excellence. STILLWATER, filmed mostly in Marseille, is a thriller with poignancy and it doesn’t disappoint.

Selecting the right actor for the lead of Bill Baker was crucial and Damon is perfect. Matt Damon has always been an actor with whom audiences can empathize. He is every bit an everyman when it comes to movies, as much as any other performer working today. As Baker he must figure how to overcome the language barrier and culture of a foreign country while searching for clues about the real killer --- based on Allison’s assertions and newly mined evidence. Bill’s dogged pursuit of the potential killer’s identity from a photograph is proof enough that he has turned the corner on his own shortcomings.

Helping Baker in his quest is French actress and mother Virginie (a wonderful performance from Camille Cottin), and her eight-year-old daughter Maya (first-time actor Lilou Siauvaud whom Damon calls “the Meryl Streep of eight-year-olds”). The relationship between them builds ever so gradually, but it happens naturally and believably. When Baker learns that Maya is a huge soccer fan following her beloved local team OM, he surprises her with tickets to a match. It is in this packed stadium where the film reaches its turning point.

McCarthy abandoned his original script for many years but eventually returned to it, reaching out to French scribes Thomas Bidegain and Noé Debré to complete the story. In addition, McCarthy’s crew in Marseille was 90% French which he says was key in incorporating the many aspects of everyday life in France’s second largest city.

Standing out like a sore thumb with his facial hair and baseball hat, Baker wins over Maya to the point she declares him her “favorite American”. As for Virginie, she is grateful to have Baker around for his adult company and his devotion to her daughter. It’s a tribute to the writers that they do not make the romantic interlude between Baker and Virginie a big deal. More pressing matters take precedent, allowing STILLWATER to develop into the relatively fast-paced thriller it aspires to be.

Breslin is easily up to the task of the imprisoned Allison --- the 25-year-old actor is now a veteran since LITTLE MISS SUNSHINE (2006) which resulted in her Academy Award Supporting Actress nomination. Allison exudes the frustration and mistrust she has of her father after years of neglect, but also appreciates his efforts on her behalf. The other standout in the film is young French actor Idir Azougli as the chief suspect Akim. Is he truly an innocent figure enjoying a night out with his pals --- or a killer walking around free?

Other than a rather tense scenario near the movie’s conclusion with a local police detective investigating Baker, I wouldn’t say STILLWATER holds any major surprises. But that is secondary to the real essence of the film. We are invested to a point, obviously, in finding Allison’s assertions to be true, but we are even more eager to see Baker’s life turned around. And that is a tribute to Damon’s fine performance.