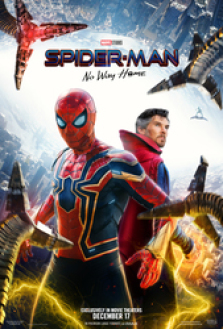 As I’ve written before, I am a dedicated Marvel fan. David --- eh, not so much. So, I was truly looking forward to Tom Holland’s third turn as the fearless flying Avenger in SPIDER-MAN: NO WAY HOME, while David was merely hoping for the best. I can certainly state that neither of us was disappointed.

And the possibility of disappointment was a running meme throughout SPIDER-MAN: NO WAY HOME. Michelle Jones or MJ (Zendaya), Peter Parker’s (Holland) girlfriend, is always reminding Peter and Ned (Jacob Batalon), their other best friend, that if you expect disappointment then you’ll never be disappointed. A tad pessimistic for a high school senior, but hey, she’s been through a lot.

SPIDER-MAN: NO WAY HOME begins right where SPIDER-MAN: FAR FROM HOME left off in 2019. Mysterio (Jake Gyllenhaal) had just informed the world that Peter Parker is Spider-Man, and now people are divided over whether or not poor Peter is a hero or a villain. Driving the bad guy narrative is J. Jonah Jameson (J.K. Simmons), host of The Daily Bugle, a conspiracy theorist who, along with other members of the media, hounds Peter at home and at school.

Things become so bad that Peter and Aunt May (Marisa Tomei) have to move. They are taken in by Happy Hogan (Jon Favreau), but even that doesn’t last long. When Peter, along with MJ and Ned, is denied acceptance at MIT, he approaches Dr. Stephen Strange (Benedict Cumberbatch) for help.

He wants the wizard to make his identity a secret again, but that means no one will remember him, including May --- and especially MJ. His constant interruptions while Dr. Strange is working his magic --- which is also hysterical --- causes the multiverse to open, allowing five super villains into the current universe.

SPIDER-MAN: NO WAY HOME is the film where Spider-boy becomes a full-fledged Spider-Man. Yes, it’s great fun and adventure having Alfred Molina (Doctor Octopus), Jamie Foxx (Electro), Willem Dafoe (Green Goblin), Thomas Haden Church (Sandman) and Rhys Ifans (Lizard) all back and on screen together, but it’s the maturity in Peter, MJ and Ned which changes things. They don’t want to kill these villains --- they want to cure them and send them back to their alternate universes alive.

It’s also interesting how truly believable the relationship between Peter and MJ has evolved. Perhaps it’s because they are a couple in real life, who knows, but every scene they have together is electric --- and we know they must be having a blast, especially in the opening shots of MJ flying around New York in Spider-Man’s arms.

Directed again by Jon Watts, with a really good screenplay by Chris McKenna and Erik Sommers, SPIDER-MAN: NO WAY HOME is wildly entertaining with great humor and amazing special effects. Every time one of these Marvel pictures comes out, it’s hard to imagine the optics can be improved, but SPIDER-MAN: NO WAY HOME has managed to do just that.

I went into the screening without watching any of the trailers. Almost impossible, I know, but I just didn’t want any clue of what was going to happen. So, I am not going to go into any more details. The MCU is asking not to reveal any of the surprises, therefore I’m going to comply.

Just take my word that SPIDER-MAN: NO WAY HOME should --- MUST --- be seen in a theater, preferably IMAX. It adds to the enjoyment to be surrounded by other fans. And make sure you stay through the entire set of closing credits --- you won’t be “disappointed”.

Since I’m hardly a devotee of the MCU, I had to wonder --- did we really need another SPIDER-MAN movie?? After seeing the latest edition --- the third directed by Jon Watts after SPIDER-MAN: HOMECOMING (2017) AND SPIDER-MAN: FAR FROM HOME (2019) --- I must admit that SPIDER-MAN: NO WAY HOME is sufficiently entertaining to warrant a “yes” response.

provides --- without revealing all the surprises. Rest assured --- MCU fans will be more than satisfied with SPIDER-MAN: NO WAY HOME.

Tom Holland, of course, reprises his previous role as Peter Parker/Spider-Man, joining many others who have appeared in Spider-Man films as far back as 2002. This list includes Willem Dafoe as Norman Osborn/Green Goblin, Alfred Molina as Otto Octavius/Doc Ock (a.k.a Doctor Octopus), J.K. Simmons as J. Jonah Jameson, Jon Favreau as Happy Hogan, Marisa Tomei as Aunt May Parker, Jamie Foxx as Max Dillon/Electro and Zendaya as MJ. And last but not least, Benedict Cumberbatch shows up as Dr. Stephen Strange from his AVENGERS persona. In addition to Zendaya’s excellent turn, Jacob Batalon does a great job as Ned, the third-wheel best friend.

SPIDER-MAN: NO WAY HOME has the usual spectacular visual effects which seem to get better with each outing, at least as far as Spider-Man leaping from one building to another with stupendous ease. And the equally stirring music from composer Michael Giacchino complements all the action.

Of course, the main twist in the storyline has Spider-Man’s civilian identity revealed, placing his family and associates in grave danger. The writers have borrowed a premise --- unintentionally or otherwise --- from the old Frank Capra classic IT’S A WONDERFUL LIFE, where the main character has his identity wiped out. I wish they had given Peter something to say along the lines of: “Just like George Bailey!” J.K. Simmons does his best impersonation of an on-air, headline-grabbing, reprehensible fear-monger akin to an Alex Jones or the late Rush Limbaugh.

Bottom line: if I, as someone who is not a fan, can recommend SPIDER-MAN: NO WAY HOME, then Jeanne will tell you that that’s reason enough to see the movie --- and in a theater.