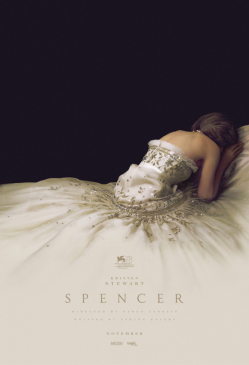 Does the world really need yet another expose about Princess Diana? After seeing director Pablo Larrain’s latest film, SPENCER, I think not. Though his movie about Jackie Kennedy Onassis entitled JACKIE was one of the best of 2016, I cannot say the same for SPENCER.

This is certainly not the fault of Kristen Stewart who stars as the beautiful but reluctant princess. Her performance is actually quite good. It’s more a result of the screenplay by Steven Knight which focuses on three days of Christmas festivities at the Queen’s Sandringham Estate in 1991.

Granted, Larrain has stated that the events depicted in SPENCER are “imagined”, but dear lord, is it necessary to present Diana as a lunatic? Mental health issues and eating disorders should never be presented lightly, and yet I fear Knight and Larrain have fallen into the trap of disclosing all the salaciousness we’ve learned over the years about Diana, but with no allotted time for understanding and sympathy. It’s just so bloody typical --- why did a man pen this screenplay?

One can’t even begin to imagine what those three days were like for the princess. She ditches her security detail and drives herself to Sandringham, getting lost along the way. She arrives after everyone else, including the Queen, only to find that a Major Alistair Gregory (Timothy Spall) has been engaged to make sure Diana toes the line. God forbid should she wear the wrong dress at the wrong time and show up late for dinner!

Her only ally in the house is her lady’s maid, Maggie (Sally Hawkins), who is promptly sent back to London because she allows Diana to dress with the curtains open. As she is relentlessly photographed, the fear is a photographer will be able to catch her in her skivvies --- or worse yet, naked --- using a telephoto lens.

To alienate her even further from her cheating husband, Prince Charles (Jack Farthing) presents Diana with the same strand of pearls he’s given Camilla. This prompts a rather bizarre dinner scenario where Diana breaks the strand, a few large pearls land in her soup and she proceeds to eat them. A dream of course, but just another example of Larrain’s willingness to showcase Diana as unstable.

Her beautiful sons are present, William (Jack Nielen) and Harry (Freddie Spry), but even that time spent together is fraught with William tasked with keeping his mother in line. All the tension of those three days comes to a head when Diana physically interrupts a pheasant shoot to demand that William stop participating and be permitted to return to London with her and Harry.

SPENCER is a remarkably beautiful film with luscious photography by Claire Mathon. And, as one would expect, the costumes by Jacqueline Durran are divine, copied from couture worn by Diana. But the lack of substance in Knight’s script is glaring --- and for a long period of time, we are treated to nothing more than a fashion show, as Stewart struts the halls of Sandringham adorned in replicas of Diana’s finest.

Yes, the performances are exceptional, especially young Nielen as William, and Hawkins, who is always quietly astonishing. Whereas Larrain was eminently respectful of Ms. Onassis in JACKIE, he is much less so here with Diana.

One has to ask --- when is enough enough? This woman suffered greatly during her brief lifetime. Why can’t we let her go, instead of portraying her as if she were insane? SPENCER is sad, heartbreaking --- and disturbing. I am immensely disappointed.

Director Pablo Larrain received well-deserved plaudits from the movie industry for his 2016 biopic JACKIE which propelled Natalie Portman to an Oscar nomination. Now he has tackled another world-famous personage in SPENCER based on three days in the life of Princess Diana 10 years into her marriage to Prince Charles. This time it is Kristen Stewart in the title role, and she may be on a path to her first Oscar nomination with a superlative performance. She certainly seems to be in the mix for Best Actress along with Jessica Chastain (THE EYES OF TAMMY FAYE) and Jodie Comer (THE LAST DUEL).

The movie opens with the tagline that SPENCER is “A fable from a true tragedy”. And while Diana’s struggles with her marriage to Charles, and her icy relationship with Queen Elizabeth is well documented, these are not the main focus of the film.

Now to address the elephant in the room. My esteemed partner will say that the filmmakers, which includes writer Steven Knight, succeed in making Diana look crazy. I would counter that the film succeeds in emphasizing Diana’s extreme unhappiness. Her sometimes aberrant behavior can reasonably be attributed to her rebellious attitude toward the Royal Family.

Prince Charles (Jack Farthing) is not on screen very often, but he manages to convey the utter contempt Charles has for Diana --- call it disdain, disrespect and general disgust. It is clear that Diana’s only real moments of happiness occur when she is with her sons, William (Jack Nielen) and Harry (Freddie Spry). In fact, one of the best scenes has Diana driving her sports car convertible with the boys enroute to a KFC for “a real treat”. Diana’s singing in this sequence captures her utter joy at this moment in time.

The three-day weekend over the Christmas holiday in 1991 doesn’t give the storyline much space to delve into interplay between the Queen (Stella Gonet) and Diana, so it doesn’t. But much time, perhaps too much, is given to fantasy remembrances by Diana at various ages, especially when she was a young ballet dancer and essentially a free spirit. There is one disturbing scene with a horde of paparazzi doing everything in their power to capture a glimpse of Diana on their cameras. We can only imagine what this recurring aspect of her existence must have been like for her.

SPENCER clearly takes the position that Diana is severely lacking in self-esteem, at least as far as her looks go. But her confidante and main dresser, Maggie (Sally Hawkins), injects a huge dose of confidence in Diana with a surprise revelation late in the movie.

Hawkins and Timothy Spall are consummate pros who deliver fine performances, as well. Spall plays Major Alistair Gregory whose job it is to make sure Diana does everything according to Royal Family traditions.

Stewart truly is at her best when displaying the different mindsets of Diana. Jeanne may note that one moment of “craziness” occurs when Diana brings the pheasant shooting to a halt by demanding her sons return to London with her, much to the chagrin of Charles who submits to her wishes anyway.

We all know the horror of Diana’s death which makes SPENCER that much more difficult to endure. And while SPENCER is not a great film, it does give Stewart the opportunity to carry the story of a major historical figure --- and she does it (pun intended) royally.