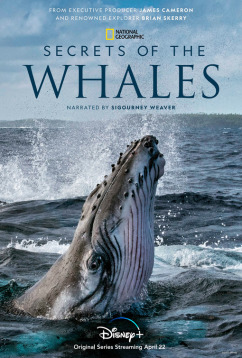 In all four of the episodes filmed over three years, National Geographic photographer Brian Skerry will be a fixture. His unbelievable photos of the whales --- and whomever is videotaping him --- bring to life these huge, intelligent creatures like no one before.

New Zealand is home to hundreds of thousands of orcas. Here they feed on stingrays, most often found on the bottom of the ocean. In one particularly enchanting scene, Brian seems to be offered a stingray to eat by one of the orcas. When Brian doesn’t partake, the orca returns and claims the stingray for himself --- most likely thinking Brian is an idiot for not accepting such a generous gift.

The orcas in Norway survive on herring, and they become very proficient at following the fishing boats which catch the herring in their nets. So instead of having to round them up themselves --- voila! --- dinner. But the fishing lines have become the greatest enemy of all whales. Like humans, they need air to breathe, so if they’re caught, and can’t get to the surface, they drown. One thousand whales per day die due to getting caught. It’s reprehensible --- and an epidemic.

The largest population of humpbacks exists in western Australia with 30,000 of them charging down the coast to Antarctica. The humpbacks have the largest fins of any other whale which they use to call other humpbacks --- or a mother may use to call her calf.

All the males sing the same tune, which travels 3000 miles. It spreads from west to east --- the same song as the whales in Australia. No other mammals use a song this way to converse or attract a mate.

The mothers feed their calves 150 gallons of milk per day, allowing the calves to gain nine tons in six months on their mother’s milk. Meanwhile mom hasn’t eaten, but when she reaches Antarctica, she consumes 5000 pounds of krill --- a two-inch-long creature which feeds on algae --- a day. An interesting note: humpbacks and orcas are mortal enemies.

Beluga whales are fascinating --- they smile and show emotions. They have the largest vocabulary in the ocean, and they call each other by name. And like humans, they can turn their heads.

The Cunningham Inlet in the Canadian Arctic is home to a summer reunion for more than 2000 belugas. Here they can use the shallow water and gravel bottom to shed their skin and scratch an itch. The females also come here to give birth after 15 months of pregnancy.

Lancaster Sound is home to one of the rarest whales --- the narwhal. They have a giant tusk which is like a long, sensitive tooth, which they use to stun their prey. For the first time, a narwhal nursing her young is captured on film.

The Atlantic Ocean is where the sperm whales hang out. Moby Dick was a sperm whale --- more than 50 tons, but as opposed to the fictional character, these whales are gentle giants. They have the largest brains on the planet --- six times the size of humans.

Dominica in the eastern Caribbean Islands is home to many sperm whales and these whales never leave. Interesting fact --- they sleep less than any other mammal on the planet and when they do, they sleep vertically --- resembling trees in a forest.

In The Azores, which is comprised of nine islands, the sperm whales keep on the move. The culture group is larger and all male, which is entirely different from the Dominica clan.

Lastly, there are sperm whales in Sri Lanka, and when Brian tries to get close to photograph them, they greet him with whale poop --- hilarious. These whales even speak an entirely different language than the whales of Dominica.

National Geographic and Disney have provided us with a remarkable look into the world of whales. These four episodes are beyond fascinating --- they introduce us to footage and facts yet unknown to us humans. Whales are complex and spectacular creatures --- and they have so much to teach us. Unfortunately, human debris is killing too many of them. It is up to ALL of us to make a commitment to be better stewards of this planet on Earth Day 2021.

National Geographics’ nature films are always spectacular and fascinating. The latest effort SECRETS OF THE WHALES is a TV mini-series filmed over three years. Comprised of four episodes, the producers couldn’t have made a better choice for narration than Sigourney Weaver. The statuesque actress was so awesome as Dian Fossey in 1988’s GORILLAS IN THE MIST, so here she is simply dealing with (tongue-in-cheek) slightly larger mammals.

All the episodes are filmed mostly underwater, and National Geographic photographer Brian Skerry takes his camera below to photograph the whales. His shots --- frequently of never-before-seen whale images --- are entrancing and Brian’s own exclamations of amazement emphasize this point. The series takes us to far flung destinations like New Zealand, Norway, Antarctica, the Falkland Islands, Patagonia, Alaska, French Polynesia, the Azores, Greenland and the Canadian Arctic.

The initial episode focuses on orcas or “killer whales”. The killer label applies to their ocean prey like stingrays and seals. Otherwise, they seem to be non-threatening to man as evidenced by one orca “offering” its stingray meal to Skerry before snatching it up for itself.

Orcas and their 15-pound brains need plenty of nourishment. The Patagonia orcas actually beach themselves at great risk to snag seals for food, while herring is the main sustenance for Norwegian orcas.

Humpback whales are featured in episode two. We see whale “kids” learning to “speak” with their mothers who give birth in the warmer waters near the equator. In Sitka, Alaska, non-family pods meet every year for a reunion of sorts, a ritual that has occurred for over 40 years.

The largest migration of humpbacks, estimated at 30,000, leave Perth in western Australia for Antarctica. The whales communicate with their own “songs” which travel 3000 miles through the waters comprising the east and west coasts of Australia. Whale biologist Nan Hauser calls it “a viral pop tune”.

A trivia note to human mothers who nurse newborns: whale moms feed their babies to the tune of 150 gallons of milk --- daily. In six months, a male infant will gain as much as nine tons (18,000 pounds).

To sustain their bodies the whales in Antarctica eat a lot of sea creatures called krill --- as much as 5000 pounds a day. But not to worry about the krill --- they collectively outweigh the world’s population by 19 million tons. We learn that after their feeding frenzy in Antarctica, the humpbacks won’t eat again for eight months. Talk about a diet.

The next episode deals with the white beluga whales who have dolphin-like teeth and seem to always be smiling. They are social animals with large vocabularies, and they can turn their heads like humans. Every year they travel 1000 miles of ocean to the Cunningham Inlet during the spring ice thaw. But they must be wary of their natural enemy, the orca.

Polar bears are another threat to belugas even though they can outswim a bear with their average speed of 20 mph as opposed to the bear’s six mph. In one dramatic sequence we witness a hungry polar bear desperately scanning the water and diving in to chase its prey, but one beluga manages to escape while another one is not so fortunate.

The doc spends a short amount of time showcasing the rarest of whales, the narwhals. These mammals eat 50-60 pounds of seaweed every day. They also dine on bottom dwelling fish, using their long tusk that acts like a stun gun to capture their prey. Witnessed on film for the first time is a lost narwhal befriended by a pod of belugas who save the narwhal’s life over many months of winter.

In the final episode we meet the ocean giants called sperm whales. They grow as large as 40 feet in length and weigh up to 50 tons. A sperm whale was the inspiration for Herman Melville’s “Moby Dick”. They have the largest brains of any mammal on Earth --- about six times the size of the human brain.

Adult sperm whales eat hundreds of squid every day by doing deep dives over 3000 feet (twice the height of the Empire State Building). They suck in huge amounts of air to sustain them until they return to the water’s surface. These whales communicate with loud clicking sounds called “codas” which reach up to 230 decibels, enough to rupture a human eardrum.

SECRETS OF THE WHALES is written and directed by Brian Armstrong and Andy Mitchell, and filmmaker/executive producer James Cameron closes out each episode with his own commentary. The bottom line in watching this breathtaking documentary is simple --- words alone cannot do it justice. But we can heartily recommend sitting down with the whole family. Each episode lasts only an hour --- it will be time well spent.