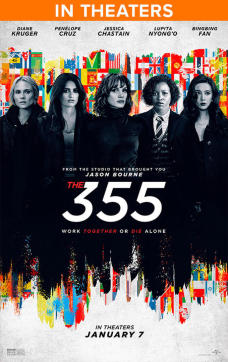 Jeanne: It pains me greatly to write a negative review of THE 355 because of all the extremely talented women --- and men --- starring in this supposed spy thriller. Lest I sound like a broken record, it doesn’t matter how exceptional the cast is if the screenplay is lousy, then

voila --- so is the movie. THE 355 is a perfect example of my on-going complaint.

Jessica Chastain, who is also one of the producers, has the lead as Mason “Mace” Browne, a CIA officer who’s not opposed to bending the rules. She and her CIA colleague, Nick Fowler (Sebastian Stan), have a thing going, which doesn’t last long --- you just can’t trust those cuties.

To prevent a terrorist group from getting some highly classified information and starting World War III, Mace teams up with a German counterpart, BND agent Marie Schmidt (Diane Kruger), Graciela (Penélope Cruz), a Colombian DNI agent, who also happens to be a psychologist, and Khadijah (Lupita Nyong’o), a computer geek who was once an MI6 agent. Tracking this gifted team is Lin Mi Sheng (Bingbing Fan), a Chinese MSS agent.

So, as you can see, this is quite a lot of star power. Édgar Ramírez even has a small part as one of Graciela’s fellow agents, however he’s totally underutilized here. It’s hard to believe all of them signed onto this dismal script, unless the opportunity to work together --- especially the women --- was tough to pass up.

There is almost nothing worse than a movie about spies being dull and boring. The storyline by Theresa Rebeck, who penned the screenplay with director Simon Kinberg, is convoluted and not especially intriguing, a death knell for a thriller. It’s all so very disappointing --- and shocking actually --- given the caliber of actors assembled.

How fun would it have been to watch Chastain, Cruz, Kruger and Nyong’o go through the paces of really great female agent-bonding escapades? Alas, it is not to be with THE 355.

David: This film is simply mind-blowing --- for its waste of the viewer’s time, but mostly for its waste of talent. How can a movie with Jessica Chastain, Penélope Cruz, Diane Kruger, Lupita Nyong’o and Sebastian Stan be such an abomination? Billed as a spy thriller writer/director Simon Kinberg and screenwriter Theresa Rebeck managed to leave off one essential ingredient --- the thrills.

Kinberg was once lauded 16 years ago as a promising writer because of MR. AND MRS. SMITH, the Brad Pitt/ Angelina Jolie caper, and he’s had success as a writer with the X-MEN franchise. As a producer he was involved with hits like THE MARTIAN and DEADPOOL. But he also wrote the screenplay for the laughable JUMPER (2008), so now factoring in THE 355, he has had a checkered career.

Whomever decided that violent hand-to-hand combat --- in one scene after another after another --- would be entertaining should seriously consider a different line of work. While the women in THE 355 generally get the better of their male combatants --- and maybe that was the whole purpose of this effort --- it becomes repetitious and boring. Speaking of violence, it’s hard to imagine how THE 355 avoided an “R” rating --- there is plenty of death by gunfire depicted. And a flat romantic interlude between Mace Browne (Chastain) and Nick Fowler (Stan) adds nothing to the story.

Chastain, Cruz and Kruger have some amazingly sterling credits on their resumes, so it was a huge disappointment to see them end up in this drivel. But let’s give credit to the costume designer who makes these ladies look great --- she is Stephanie Collier.