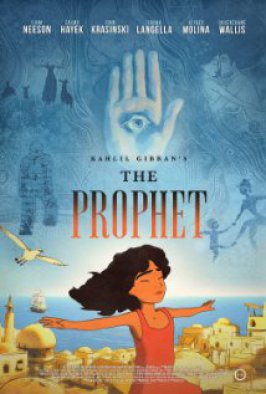 "Kahlil Gibran's The Prophet" with their many talents to bring this beloved book to animated life. Having sold over 100 million copies in more than 40 languages since first published in 1923, Gibran's timeless compilation of poetry was destined for the big screen.

Exiled poet and artist, Mustafa (Neeson), is under house arrest in a seaside village somewhere in the Mediterranean. His housekeeper, Kamila (Hayek), has a daughter, Almitra (Wallis), who has not spoken since her father died, and refuses to stay out of trouble.

Mustafa's guard, Halim (Krasinski), is charged with watching Almitra, a task he fails miserably. Mustafa is trying desperately to return to his homeland, a goal the Sergeant (Molina), in charge of his isolation, is trying to prevent.

Neeson's repertoire of late has been very disappointing, so it is immensely gratifying to hear his melodic voice lent to Mustafa's character. His deep resonance helps make the moral issues imparted by this kind and learned poet the focal point of the story.

Beautifully written and directed by Roger Allers ("The Lion King") with gorgeous animation and music, "Kahlil Gibran's The Prophet" is a spectacular tribute to Gibran's widely-acclaimed work. Life lessons are difficult to express without sounding preachy and overbearing, but Allers has managed to take this masterpiece and create a true work of art.

A personal project for Hayek, who produced, "Kahlil Gibran's The Prophet" was an official at the Cannes Film Festival and the Toronto International Film Festival. It also played this past May at the Chicago Critics Film Festival.

In a summer filled with too many action/adventure films, "Kahlil Gibran's The Prophet" is a lovely break from all of that nonsense.