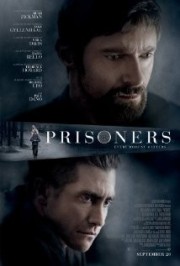 What would you do if someone kidnapped your little girl? And how far would you go to get her back? These are the questions being asked and answered in this haunting tale about the abduction of two little girls and their parents' nightmare that follows.

seriously. He hasn't had a drink in nine years, something that will change as the hours of the disappearance grow into days. His wife Grace (Bello) is a much more fragile character, and takes to her bed with a variety of pills to help her cope by sleeping.

Joy's parents, Nancy (Davis) and Franklin (Howard), are equally distressed, but it is Keller who becomes instantly disillusioned with the efforts of Detective Loki (Gyllenhaal), when the prime suspect, Alex Jones (Dano) is released to his aunt, Holly (Leo). Alex owns a small camper, which was seen parked in the neighborhood by Anna's brother Ralph (Dylan Minnette) and Joy's sister Eliza (Zoe Borde) when they were out walking with the girls before they disappeared later in the day.

Keller becomes obsessed with Alex, certain that he is the one responsible for their abduction. And when Alex whispers to Keller during a tussle in the police station parking lot, Keller is determined, no matter what it takes, to make Alex tell him where he has hidden Anna and Joy.

As the mother of a daughter, "Prisoners" is extremely difficult to watch. It doesn't matter how old your children are, the fear of harm is always present. And all four of these actors portraying the parents are heartbreaking in their own ways. No one, who has not been through this horrendous ordeal, can imagine what it's like, but Jackman, Bello, Davis and Howard give us a realistic insight to the horrors of not knowing.

Jackman is particularly effective --- his anger and frustration is palpable and believable. He wants so desperately for Alex to reveal what he knows, but Alex functions at the level of a child due to an early-life accident. Dano's performance is heart-wrenching and gut-wrenching at the same time. Though we may or may not approve of Keller's torturous methods --- at the same time --- we simply want Alex to say SOMETHING --- anything.

Meanwhile, while Keller is doing his thing, Loki is working furiously to solve this case. He knows Keller is up to something, but at the same time, he has discovered another person of interest. Gyllenhaal is absolutely perfect for this role. He suggested to director Denis Villeneuve that Loki exhibit a facial tic, which Villeneuve approved. It was so effective that I found myself wondering if Gyllenhaal had always had this affliction. His ability to portray the dark, brooding type has intensified over the years, and his decision to take on this role, after recently playing another police officer in "End of Watch", has paid off handsomely. This is a performance that will not be soon forgotten.

And, as I mentioned, the supporting cast, including especially Leo, is amazing. Holly is one crafty, seemingly loving aunt to Alex, and Leo cracks her to life like a whip. Remembering that this is a very painful subject matter, "Prisoners" is a gripping movie experience with enough twists and turns to keep you on the edge of your seat.

This harrowing tale about child abduction and the reactions of desperate parents is not based on a true story, but it certainly could have been ripped from today's headlines. A family's worst nightmare is told in explosive, spine-tingling fashion with extraordinary performances from an all-star cast.

Hugh Jackman follows up his Oscar-nominated turn from "Les Misérables" with another stunning portrayal, here as Keller Dover, the frantic father of six-year-old Anna (Erin Gerasimovich), who, along with a friend, goes missing on Thanksgiving Day. As minutes turn into hours, and hours into days, the race against time is a gut-wrenching movie- going experience, but one that will be remembered long after you leave the theater.

Jackman's performance is equally matched by Jake Gyllenhaal as Detective Loki, the calm voice of reason, even as he simmers inside with the fierce desire to find the missing girls safe and sound. It is Gyllenhaal's finest role thus far in his career.

Paul Dano plays the unfortunate Alex Jones, a mentally-challenged neighborhood figure who becomes the chief suspect in the abduction. When the police case against Alex runs cold, Keller takes it upon himself to get at the truth, no matter the means. It's a classic case of morality vs. doing what is necessary, and as written by Aaron Guzikowski, it's a brutal dilemma that Jackman's character must confront.

Maria Bello plays Keller's wife, Grace, and Viola Davis and Terrence Howard are Nancy and Franklin Birch, mother and father of the other missing girl, Joy (Kyla Drew Simmons). They all have intense dramatic moments in the movie, each adding their own version of parental panic and grief. And Oscar winner Melissa Leo ("The Fighter") rounds out the main cast as Holly Jones, Alex's mysterious aunt.

"Prisoners" is directed by French Canadian Denis Villeneuve, whose previous lesser-known films have won awards all over the world at a variety of film festivals.

The words "riveting" and "gripping" are so overused in describing thrillers, but they apply to "Prisoners" as much as any adjectives. It's a film that is difficult to watch at times, but the outstanding performances by Jackman and Gyllenhaal make it mandatory viewing.