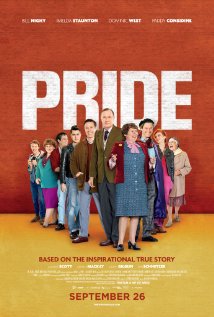 Gushing over a film is so not cool, but I can't help myself --- I love inspiring films about underdogs --- especially labor union underdogs. In 1984, when Ronald Reagan's best friend, Margaret Thatcher, was Prime Minister of England (they were both very proud union-busters), the National Union of Mineworkers went on strike, which lasted over a year.

A group of gays and lesbians living in London, and unofficially led by Mark Ashton (Ben Schnetzer), decided to show solidarity with the striking mine workers, who were being harassed and starved by Thatcher's government. After all, they were used to such treatment, being gay, and Mark was very civic minded.

He convinced his closest friends, Mike (Joseph Gilgun), Gethin (Andrew Scott), Jonathan (Dominic West) and Steph (Faye Marsay) to start collecting funds to support the miners. Along the way, a young university student named Joe (George MacKay) joins the group as the "official" photographer. Initially, the union was not interested in their help, so Mark chooses a small mining village in Wales as the recipient of their generosity.

"Lesbians and Gays Support Miners" (LGSM), as their group became known, decides to take their monetary contributions directly to their chosen town. After meeting with Dai (Paddy Considine), the village's union leader, in London, the merry band loads up their colorful bus and heads to Wales.

Immediately, fellow citizens Cliff (Bill Nighy), Hefina Headon (Imelda Staunton) and Sian James (Jessica Gunning) welcome this odd group of strangers with open arms. Others are not so embracing, until they learn how much money LGSM has brought --- and how gays and lesbians are not really any different than they.

True stories, such as this, are most often moving emotionally, and also provide a life lesson. Otherwise, no one would bother to make a movie. And "Pride" doesn't disappoint in either area. Of course, not everyone in this Wales village is happy to have the LGSM members present, which is an important part of the "life lesson" angle.

Directed by Matthew Warchus and beautifully written by Stephen Beresford, one can hardly go awry with Staunton and Nighy in the cast. Both are impeccably seasoned actors, but without the well-honed, and not overly maudlin script, "Pride" would not have become the testament to support, commitment and love that it is.

Watching the bewildered townsfolk coming together and living together with their homosexual counterparts is lovely, and quite amusing. After a particularly suggestive disco dance number by Jonathan at one of the gatherings --- with ALL of the women wanting to dance with him --- a couple of the miners come to realize that the social/sexual importance of moving to the music. It's a great scene --- and one that demonstrates the power of fun.

Schnetzer and MacKay are both outstanding. They each bring a unique energy to their roles. Schnetzer is so earnest and believable as the civil rights leader driven to champion social justice. And MacKay has an incredible sweetness about him which aids in his portrayal of Joe, and exacerbates his predicament at home where his family doesn't know he's gay. They are both wonderful performances.

"Pride" is a rousing tribute to activists everywhere. It won the Queer Palm award at the 2014 Cannes Film Festival --- a much deserved recognition.

Based on true events, "Pride" tells the story of a group of gay and lesbian activists in 1984 London who lent their support, both financially and emotionally, to their country's striking miners. With a cast made up of established British stars and lesser known actors, the film is a stirring tribute to the human spirit, and man's innate compassion for persecuted people.

Without the support of organizations like Lesbians and Gays Support Miners (LGSM), the laborers and their families who made up the National Union of Mineworkers in Great Britain may not have survived the harsh winter. But thanks to LGSM and others, not only did they survive, the bond that was formed between the striking miners and the gays eventually led to widespread support throughout the UK for gay rights.

At a time in human history when being openly gay was shunned by straight society, it was a remarkable thing for a group like LGSM to pool their collection efforts and support the miners. The LGSM troupe bussed to the small mining town of Onllwyn in South Wales to introduce themselves, and present the funds they had amassed. Initially their welcome was a cold one, but once they intermingled with the townspeople, friendships were formed and prejudices were largely forgotten, except for a few stubborn citizens who could not accept the partnership.

In the crowd-pleasing mode of "Norma Rae" --- the 1979 film that propelled Sally Field to a Best Actress Oscar --- "Pride" is filled with humor to soften the more serous dramatic moments. Director Matthew Warchus, a Tony Award winner for "God of Carnage", and screenwriter Stephen Beresford, have blended a cast of well-known British stars, including Bill Nighy, Imelda Staunton, Paddy Considine and Dominic West, with relative unknowns Ben Schnetzer, George MacKay and  Andrew Scott.

Schnetzer is actually a New York born actor who plays Mark Ashton, the leader of the gay activists, an Irishman in real life. Schnetzer's performance grew on me, and I was sold when, in one scene, he pauses ever so slightly before delivering a powerful, impromptu speech during a meeting of LGSM and the reluctant townspeople of Onllwyn.

In one of the best scenes in the film, at this same meeting, a local young woman stands and sings, a cappella, a Welsh favorite called "Bread & Roses", joined moments later by the rest of her neighbors. It's a beautifully orchestrated and emotional moment which helped to ease the tensions between the two groups.

Nighy plays Cliff, the secretary for the local miners. He is immediately friendly with LGSM. It's a quietly effective part for him, far different, for example, from his "Pirates of the Caribbean" character. Staunton is Hefina, another supporter of the London group. An Oscar nominee for the wonderful "Vera Drake" in 2005, she is always a dependable player. Considine is a strong presence as Dai, a union leader, and West is a member of LGSM who builds instant friendships with the miners' wives through his dancing ability.

Margaret Thatcher, the conservative UK Prime Minister at the time, was stolidly against the striking miners, and the movie holds nothing back showing contempt for her administration. Politics aside, though, "Pride" is a compelling and entertaining motion picture.