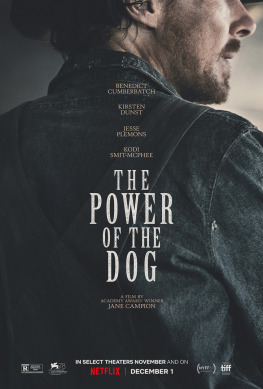 The much-anticipated latest effort from the brilliant director Jane Campion, THE POWER OF THE DOG, is well worth the wait. Ms. Campion also wrote the screenplay based on Thomas Savage’s 1967 novel of the same name. This western drama is set in Montana in 1925 where the sprawling vistas are every bit as spectacular as the cast Ms. Campion has assembled.

Benedict Cumberbatch and Jesse Plemons star as the Burbank brothers, Phil and George, well-to-do cattle ranchers who have been driving their herds together for 25 years. Phil is content with things as they are, but George is lonely. He is smitten with Rose Gordon (Kirsten Dunst), the cook at the inn where he, Phil and their crew have stayed.

During their latest drive, while eating dinner which Rose has prepared, Phil makes fun of her teenage son, Peter’s (Kodi Smit-McPhee), lisp and effeminate proclivities. As she weeps in the kitchen, George comforts her, professing his admiration for her.

Back at the ranch, George informs Phil that he and Rose are married, and he plans a celebratory dinner with their parents, Old Gent (Peter Carroll) and Old Lady (Frances Conroy), along with the governor (Keith Carradine).

As unkind as Phil was to Peter, he is even worse with Rose. He accuses her of marrying George for his money and treats her with contempt. To assuage her unhappiness, Rose begins to drink --- a lot.

Peter, who is away at medical school, has vowed to save his mother and give her a better life. When Peter visits the impressive homestead during his summer break, he realizes his mother is now an alcoholic with Phil as the cause. He reaffirms his pledge to improve Rose’s situation.

Campion’s screenplay is taut, with no wasted words or flowery ruminations. At two hours and six minutes there also isn’t one moment without the anticipation of something --- anything --- going wrong. THE POWER OF THE DOG isn’t a violent film, except for one excruciating scene of Phil briefly beating a horse, but the anxiety of Phil possibly exploding is always present.

This is a testament to the power of Cumberbatch’s performance. He is serenely evil --- a ticking time bomb --- and it’s impossible to know what will set him off. Phil doesn’t like to bathe --- he won’t even clean up for dinner with the governor, so Cumberbatch didn’t bathe for lengthy periods of time on set. His portrayals are always well-conceived and powerful. His perceptions of the character Phil are astounding, allowing for the most riveting performance of his career. He's stepping into the footprints left by Daniel Day Lewis, becoming the most accomplished thespian of his generation.

Though THE POWER OF THE DOG is Cumberbatch’s film, he has some stiff competition from Dunst, Plemons and especially Smit-McPhee. Dunst is superb going from innkeeper to lady-of-the-manor to a full-blown alcoholic. Every time Phil is near to Rose, the fear is palpable in Dunst’s reactions. Plemons, who is Dunst’s partner in real life, is seriously perfect as George. He’s so in love with Rose that he’s oblivious to her suffering --- and drinking.

Smit-McPhee is downright diabolical as the quietly cunning Peter --- a son willing to do anything to protect his mother. Campion’s script builds ever so slowly to the final twist with foreshadowing all throughout THE POWER OF THE DOG. Little asides here and there all come together to make sense of the unexpected outcome.

But it wouldn’t be a Campion film without the sumptuous cinematography by Ari Wegner and uniquely suitable original soundtrack by Jonny Greenwood. Campion and Wegner do blowing prairie grass as good as, if not better than, Terrence Malick, only not as terminal.

THE POWER OF THE DOG is a gloriously beautiful movie with unforgettable acting. It begs to be seen on the big screen.

In theaters now, premiering on

Benedict Cumberbatch is no stranger to unusual roles and his portrayal of American rancher Phil Burbank in THE POWER OF THE DOG is different even for him. In fact, the film is worth seeing just to watch him strut around in spur-laden cowboy boots and perpetually dirty clothes as he delivers his lines with no trace of a British accent.

Phil is not a nice guy. He is mean-spirited, rarely smiles and has a persona like a smoldering ember about to burst into flames. Yet I found his character sympathetic, especially when he laments the loss of his friend Bronco Henry. Phil is articulate --- a Yale grad with honors --- and can handle anything related to being on a ranch. That includes castrating a bull with a couple of knife swipes and removing the testicles barehanded --- not a scene for the squeamish.

Phil owns in a huge rural homestead in Montana in 1925, along with his brother George (Jesse Plemons). When the latter marries the widow Rose Gordon (Kirsten Dunst), she and her prissy --- as Phil calls him --- son Peter (Kodi Smit-McPhee) move in, and the film gets really interesting.

Peter has a talent for making paper flowers. That, along with his skinny body and choice of attire, make him a target for Phil and the ranch hands who work for the brothers. The term “faggot” is uttered once and it stings. Still, Peter survives the hazing and eventually Phil warms up to him.

George is a gentleman who is obviously disdainful of his brother’s behavior, suggesting at one point that Phil might not be welcome at dinner --- when the governor (Keith Carradine) and his wife are invited to the home --- without a “washing”. Phil has his own manner of getting clean --- a naked mud bath in the nearby lake. This scene and others of brief male frontal nudity earned this film its “R” rating.

THE POWER OF THE DOG is writer/director Jane Campion’s first feature-length movie in 12 years. She won an Oscar in 1993 for THE PIANO as its screenwriter and was nominated for Best Director. Her attention to detail gives her film the feel of what it may have been like in rural 1925. Animals are not shown much kindness, as Phil torments his horse in one scene, and Peter snaps the neck of a wild rabbit to put it out of its misery after it breaks a leg thanks to Phil’s actions.

The film’s title is derived from an obscure bible passage and its meaning is not clear. But when Peter acknowledges to Phil that shadows in the distant mountains remind him of a barking dog, this seems to be the turning point when Phil and Peter bond. Here the writing becomes ambiguous --- is Phil really fond of Peter or stringing him along for whatever reason? And what does Peter really think of Phil?

Because Campion imbued Phil with an air of unexpected actions THE POWER OF THE DOG has an undeniable underlying tension. Rose and Phil get along like oil and water, and her unhappiness motivates her to turn to alcohol. George is a bit naïve and not very street smart --- to the point that Phil has to explain about Rose’s drinking.

Jeanne will wax poetic about the cinematography by Ari Wegner --- and rightly so. And Oscar nominee Jonny Greenwood’s score is pulsating. A surprise ending may not be the one that audiences will like or even fully understand. But it serves to answer the question about Phil and Peter’s relationship, a pairing that drives most of THE POWER OF THE DOG.

In theaters now, premiering on