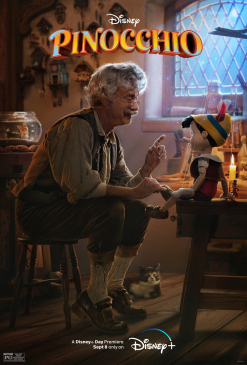 There is much debate regarding the efforts of some to remake the Disney animated classics into live-action films. For Academy Award-winning director Robert Zemeckis, a new PINOCCHIO was a project he very much wanted to tackle. Walt Disney’s 1940 original is Zemeckis’ “all-time favorite”, which he considers “the most beautiful, animated feature” ever completed.

When Tom Hanks learned that Zemeckis was thinking about making PINOCCHIO into a live-action version, he immediately prevailed upon the famed director, with whom he’s worked three other times, to play Geppetto. Honestly, it’s a slam dunk now that Hanks has aged into the role. And with a gray wig, moustache and make-up, he looks every bit like the Geppetto from the animated film.

Pinocchio himself, who is CGI created, is voiced by Benjamin Evan Ainsworth, who does a truly wonderful job. Zemeckis had him and the other voice actors on set every day to interact with the live performers, who include, besides Hanks, Cynthia Erivo as The Blue Fairy, Luke Evans as The Coachman, Italian actor Giuseppe Battiston as Stromboli and Kyanne Lamaya as Fabiana, a young puppeteer with an injured leg.

But what would any version of PINOCCHIO be without the beloved character, Jiminy Cricket, also CGI, voiced here by Joseph Gordon-Levitt? Providing Pinocchio with a conscience before he earns his own has always been Jiminy’s first and foremost responsibility.

Gordon-Levitt is well aware of the importance of his task ---- and always telling the truth --- lest your nose grows longer like Pinocchio’s. Perhaps given the current state of our political climate, we should make viewing PINOCCHIO a requirement for holding public office, though I’m not sure members of a certain party would get the point. But I digress ---

Keegan-Michael Key is on hand to voice the well-known red fox “Honest” John, who sells Pinocchio to Stromboli, the owner of a carnival sideshow. And Zemeckis, who co-wrote the screenplay with Chris Weitz, has added another new character, Sofia the Seagull, voiced by Lorraine Bracco.

This PINOCCHIO features all the harrowing experiences we associate with the original, from the marionettes at the circus, to Pleasure Island and donkeys, up to and including the gigantic sea monster who swallows Geppetto, Pinocchio, Cleo and Figaro, boat et al. While Disney is known for the occasional terrifying image, Zemeckis doesn’t disappoint there either, with several frightening scenes which may cause nightmares for the toddler set. So, parents beware ---

And lastly, this being such a Disney classic, the music is forever memorable. The Oscar-winning “When You Wish Upon a Star” is beautifully sung by Tony-winning Erivo, The Blue Fairy, instead of Jiminy Cricket. Other notables from 1940 include “I’ve Got No Strings” and “Hi-Diddle-Dee-Dee (An Actor’s Life for Me)”. Alan Silvestri, who has joined forces with Zemeckis on 19 films, composed the background score and collaborated with Glen Ballard on a few new songs. The music is enchanting as always.

No matter what your opinion is on the discussion surrounding these live-action adaptations, Zemeckis’ updating feels fresh and innovative. And seriously, who doesn’t want to see Hanks play the much-loved Geppetto?

“Pinocchio” was first conceived 139 years ago by Italian writer Carlo Collodi, and it’s been 82 years since the original animated version of the story by Walt Disney was released in movie theaters. Now acclaimed director Robert Zemeckis has cast Tom Hanks and Joseph Gordon-Levitt, among others, in the 2022 version which combines live action and CGI.

For today’s youngsters who may have somehow missed the Disney original, PINOCCHIO will be a treat. For everyone else, it’s a beautifully made film which will bring back memories of the first time we ever saw the iconic characters of Geppetto the wood carver, Figaro the cat, Cleo the goldfish and of course, Pinocchio’s conscience Jiminy Cricket.

Today’s technology greatly enhances the experience of seeing PINOCCHIO again. Zemeckis and his writing partner Chris Weitz have added about 17 minutes to the original running time, including several new songs by Oscar nominees Alan Silvestri and Glen Ballard.  And a new character, Sofia the Seagull (voiced by Lorraine Bracco) is introduced.

But the original theme of the story is, of course, intact, namely that the elderly wood carver Geppetto (Hanks) would love a real boy to join Figaro, Cleo and himself. When he espies a star in the sky, Geppetto makes a wish and while he is asleep, The Blue Fairy (Cynthia Erivo) appears. Soon Pinocchio (voiced by Benjamin Evan Ainsworth), who is made out of pine, can walk and talk.

The appearance by Tony-winner Erivo is a magical scene.  She is given fluttering wings and a graceful look, but when the Broadway star sings the classic “When You Wish Upon a Star” it is totally enchanting. In fact, Jeanne was sobbing.

This film represents Hanks’ fourth collaboration with Zemeckis --- it was the actor who approached the director about playing Geppetto --- after FORREST GUMP, CAST AWAY and THE POLAR EXPRESS. PINOCCHIO also reunites JGL with Zemeckis after THE WALK in 2015. Both Hanks in the live-action segments and JGL lending his voice talents to Jiminy Cricket are exceptional.

Other standouts are Keegan-Michael Key as the voice of “Honest” John and Luke Evans as The Coachman who lures children to Pleasure Island to change them into donkeys. The great, great uncle of Key’s wife was a New York teacher who was the first to translate Collodi’s Italian story into English. Also of note are Kyanne Lamaya as Fabiana, a puppeteer/dancer with a serious leg brace, and Jaquita Ta’Le voicing the sweet marionette dancer Sabina.

The final episode in Pinocchio’s adventure finds him inside the body of a rather large sea monster, along with Geppetto, Figaro and Cleo. The monster is fiercely drawn, looking every bit like a huge, sharp-toothed whale. Some of the images may be a bit too scary for the youngest of kids, hence the film’s PG rating.

The group’s eventual escape on Geppetto’s fishing boat through the monster’s mouth and the swirling ocean waters is exciting and remarkable. Grab your kids and re-live one of the most adored children’s stories of all time.