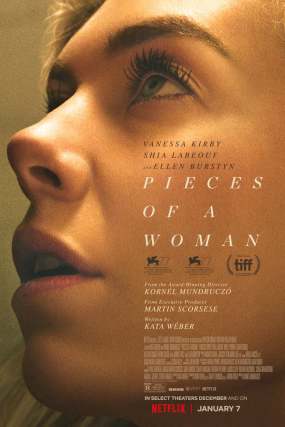 Wife/husband team --- David and I so appreciate this --- Kata Wéber and Kornél Mundruczó have crafted a beautiful example of filmmaking, PIECES OF A WOMAN. It began as a play which Wéber wrote and Mundruczó directed. It premiered in Poland in 2018 and from there Weber worked it into a screenplay with Mundruczó again as director.

PIECES OF A WOMAN follows Boston couple, Martha (Vanessa Kirby) and Sean (Shia LeBeouf), as they navigate the last few days of Martha’s pregnancy and her fervent desire to have a home birth with a midwife. When the time for delivery arrives, Martha’s midwife of choice is unavailable, so Eve (Molly Parker) is sent in her place. Though Eve is competent, Martha is disappointed.\

But that emotion fades away as the process of childbirth begins. And for the next 24 minutes, in a one-shot sequence, the drama unfolds. What comes after is a year-long process as Martha and Sean attempt to deal with their choices --- and Martha’s overbearing mother, Elizabeth (Ellen Burstyn).

For Hungarian filmmakers Wéber and Mundruczó, this is their first English-language feature. They had worked together on WHITE GOD, which won the Prize Un Certain Regard, 2014 Cannes Film Festival, and JUPITER’S MOON (2017). And for them, this venture is personal. Though they did not suffer a tragedy as profound as the one here, they still had to work through their loss, making PIECES OF A WOMAN a testament to their grief.

It isn’t just their anguish, though, that PIECES OF A WOMAN speaks to. So many women have suffered comparable losses with no one to turn to --- or even help make sense of their agony. And this is the central theme of PIECES OF A WOMAN. How does Martha adjust? What happens with her marriage to Sean --- and her tenuous relationship with her mother? Weber gives us some powerful insight, but there are no solutions.

Kirby is simply marvelous. She did an incredible amount of research for this role, even attending the childbirth of one of the women she grew close to during her quest for greater knowledge. Since she’s not yet had a child, it was imperative for her to learn as much about the process as possible.

Best known for playing Princess Margaret in “The Crown”, Kirby has an amazing talent for expressing so much through her silence. Her pain is exquisitely real, especially in the courtroom scene at the end of PIECES OF A WOMAN. It’s an Oscar-worthy portrayal.

For LaBeouf, this is perhaps the best performance of his career. Sean’s blue-collar roughness to Martha’s more demure upbringing doesn’t mean there is no love --- or chemistry --- between this couple. But Sean has an addiction issue, which rears its ugly head when things go south, and LaBeouf is more than capable of handling the turnaround in Sean’s behavior. It is the perfect role for him.

Burstyn has been a stalwart performer for years, and Elizabeth offers her the opportunity to shine once again. It’s a juicy role --- one that many mothers may --- or may not --- identify with, but compelling. She’s a force to be reckoned with, unfortunately poor Martha isn’t up to the task. That is, until the dinner party, which forces both Martha and Elizabeth to deal with their differences. Burstyn is phenomenal --- a Supporting Actress nod, perhaps?

I will end by stating that PIECES OF A WOMAN is not for everyone. If you have ever suffered a great loss, then it may be too painful --- or it may

help --- only those who have will know. But I did find Howard Shore’s score to be mesmerizing and comforting, which may help with the subject matter.

PIECES OF A WOMAN was originally a play in Warsaw, Poland, and I must say the movie version is hard to shake. In the hands of director Kornél Mundruczó and his screenwriter wife Kata Wéber, the film strikes deep emotional chords with a subject matter that is rarely seen on the big screen or television. The only exception to that may be TV’s “Call the Midwife” which is one of Jeanne’s favorite forms of entertainment --- she likes a good cry every now and then.

Vanessa Kirby is well known for portraying Princess Margaret on TV’s “The Crown”. In PIECES OF A WOMAN, she drops her British accent playing Martha, a Boston woman who spends the first fifth of the film in labor. In fact, the opening birth scene was shot in a single 24-minute take and it is as agonizing for the viewer as it is for Kirby’s character. But don’t be dissuaded by that comment as Kirby’s performance is exceptional and she is receiving Oscar buzz.

Martha’s husband, Sean (Shia LeBeouf), looks on helplessly as she struggles mightily to push out the infant. She alternately emits groans and shrieks of agony in between brief respites during the ordeal. Sean offers what support he can muster to little or no avail. What seems apparent is their mutual love for each other.

Assisting with the delivery is Eve (Molly Parker), a substitute midwife that neither Martha nor Sean know well because their wanted midwife was overseeing another birth. Parker’s performance here is heartbreaking and believable. She was an Emmy nominee for a recurring role in TV’s “House of Cards”.

Obviously, people grieve differently when confronted with a devastating loss. PIECES OF A WOMAN presents such a scenario within the context of a loving couple like Martha and Sean, but only superficially. Wéber does not provide much in the way of communication as the parents drift apart. Instead, as the director separates episodes into specific days of the months that follow, Sean takes his grief to an unexpected level by having an affair with Martha’s cousin, Suzanne (Sarah Snook from “Succession”). She is an attorney hired by the family matriarch, Elizabeth (Ellen Burstyn), who believes that the midwife bears responsibility and must be held accountable in a court of law.

In case you’re looking for credibility with this production, no less a figure than Martin Scorcese is an executive producer on PIECES OF A WOMAN.

And Burstyn, also the subject of Oscar talk, is as impressive here as her resume would suggest. She is a multiple Emmy winner to go along with a Tony and an Oscar. Burstyn is only a Grammy shy of the rare EGOT stature. As for LaBeouf, his off-screen antics and well-documented alcoholic escapades do his career no favors. He is quite good as the distressed father of the infant.

I like PIECES OF A WOMAN for another reason. It is a testament to the bond a mother feels instantly with her newborn child. Martha refers to the infant as her daughter while everyone else refers to her as “the baby”. Later in the film the dramatic court scene conclusion provides Kirby with a chance to really shine and she does. In an earlier sequence Martha, Sean, Suzanne, Elizabeth and others are together at a family dinner. It is Martha’s silent stomping around the house and her reticence for most of the time that speaks volumes.

Kirby also spent time with women who had similar experiences. She even took reality a step further by wearing postpartum diapers for later scenes following the actual delivery. Of her decision to partake in this film, Kirby says “I’d been looking for a part that scared me. This completely terrified me”.