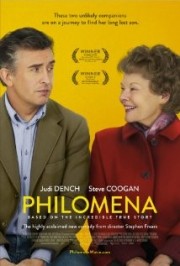 The stoke of genius in this film is the pairing of Judi Dench and Steve Coogan. Going against type, Coogan portrays Martin Sixsmith, a real-life BBC correspondent, who, after losing his most recent job as a Labour government adviser, finds himself adrift until he meets Philomena Lee (Dench) and takes up her cause.

Based on Sixsmith's investigative book, "The Lost Child of Philomena Lee" (2009), with a screenplay by Coogan and Jeff Pope, "Philomena" focuses on the search for Ms. Lee's son, whom she bore out of wedlock 50 years earlier.

At the time, Philomena was a young girl living in a convent in Roscrea, Ireland, for unwed mothers. Forced to give up her child to an American couple in an "adoption", and made to sign contracts that would not allow her to ever locate her son, Philomena finds herself, all these years later, in need of some answers.

Her daughter introduces her to Martin Sixsmith, hoping he can help Philomena make specific inquiries. After visiting the convent and learning nothing, Martin reaches out to contacts from his BBC days in the U.S. He finds out that Philomena's son, Anthony, had been raised by the Hess family, and his new name was Michael. Martin's current editor subsidizes a trip to Washington, D.C. to give Philomena and Martin their best chance at finding Michael.

"Philomena" is directed by Stephen Frears, who has an outstanding track record with such films as "My Beautiful Laundrette", "Dangerous Liaisons", "Dirty Pretty Things" and "The Queen", to name a few. As I stated earlier, having the marvelous Dame Judi and the incorrigible Mr. Coogan play off each other is brilliant. One simply cannot think of two better choices to play these real-life characters.

Dench has maintained a long and storied career, both on stage and in film. Her versatility knows no bounds, and here, as Philomena, she is particularly delightful. As opposed to Martin's upper crust demeanor, Philomena sees wonder in just about everything and never loses her Catholic faith. She's irresistible and heartbreaking all at once.

Coogan, who realized while writing this script just how much alike he and Martin are in real life, is quietly astounding in his portrayal of him. Usually Coogan is much more off-the-cuff and jovial in his roles, having starred in such improvised films as "The Trip" (2010), which is totally hilarious, by the way. Dramatic roles are not typically his cup of tea, though he was incredibly effective as the neglectful father in this year's "What Maisie Knew".

Unfortunately, "Philomena" has been criticized for its depiction of the Catholic community which housed the young Philomena, and gave away her child. In an open letter to her critics posted on Deadline.com, Ms. Lee writes that her "story is meant to be a testament to good things, not an attack."

"Philomena" is indeed a testament to all things good. It's a wonderful film, with a perfect cast. Anyone who thinks otherwise should examine their own lives first.

"Philomena" is a must-see film that centers on the anguish of an 18-year-old mother who is forced by the nuns at an Irish convent to give up her young son for adoption, circa 1952, and 50 years later, launches a search for his whereabouts.

Judi Dench portrays Philomena Lee, the real-life Irish woman --- still alive today  --- whose son Anthony was born out of wedlock. She lived in the convent with him until, at age three, he was adopted by an American couple. It was a covert form of punishment for what was viewed as her unforgivable act, but primarily considered compensation for Philomena's room and board at the convent. Furthermore, she had to sign an agreement barring her from further contact with Anthony.

Philomena eventually meets an ex-BBC journalist and former director of communication for Tony Blair's government, Martin Sixsmith (Steve Coogan). Intrigued with her story, and in search of a human interest angle to boost his career, Sixsmith convinces Philomena to fly to the U.S., and so the unlikely duo heads to Washington, D.C. to find out what happened to her son.

It's a beautifully acted and scripted story. Based on Sixsmith's 2009 book "The Lost Child of Philomena Lee", Coogan, who co-wrote the screenplay, had Dench in mind all along to play Philomena. Speaking with his writing collaborator Jeff Pope, he said ‘It would be amazing if we had Judi Dench to do this. So let’s aim high.’

Dench is in line for a Best Actress Oscar nomination. She turns 80 in a couple of weeks, and should be a shoo-in for her seventh Academy nom (she won in 1999 as Best Supporting Actress for "Shakespeare in Love"). I loved Coogan's performance so much I am convinced he is deserving of recognition. Known primarily as a comedian, Coogan shows a serious side of him that will likely amaze his followers --- in a very good way.

Filled with richly comic human events, and deeply emotional scenarios, "Philomena" is one of the best films of the year. Thanks to the deft portrayals by Dench and Coogan, the relationship between Philomena and Martin grows into a real, if unlikely, friendship. When they eventually make it back to the convent all those years later, it is Martin who defends Philomena and her quest to find her son. It is Martin who is not afraid of offending the convent's new leadership, who dares to confront the ultra-stern Sister Hildegarde (Barbara Jefford).

"Philomena" is directed by Stephen Frears ("The Grifters", "Dirty Pretty Things", "The Queen"), who collaborated with Dench on three other movies, including "Mrs. Henderson Presents". It's one of those small films that serious moviegoers will heartily embrace.