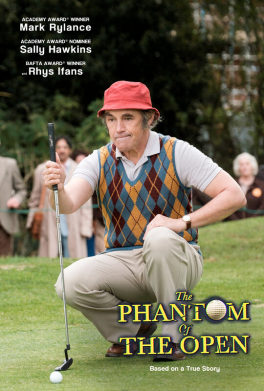 In 1976, 46-year-old Maurice G. Flitcroft (Mark Rylance) is facing unemployment. He works as a crane driver for the Vickers Armstrongs shipyard in Barrow-in-Furness, located in Cumbria in Northwest England. He met his wife, Jean (Sally Hawkins), there years earlier.

Always a positive guy, Maurice realizes he must find another profession and suddenly becomes fixated on golf, even though he’s never even held a club. And he doesn’t start small --- he immediately enters the British Open Golf Championship. He checks off the little box next to the word “professional” on the application.

Of course, a female secretary catches the improbability on Maurice’s form, but Keith Mackenzie (Rhys Ifans), one of the administrators of Royal & Ancient, who organize the Open, pooh-poohs her concerns and voila --- Maurice is in the tournament.

His disastrous score of 121, 49 over par, in the qualifying round, is the worst ever in the Open’s history --- a record which still stands today. The powers that be are enraged that this has happened, but for the British press and the public, Maurice becomes a folk hero.

It's not a prerequisite to play the game of golf --- or like watching it --- to enjoy THE PHANTOM OF THE OPEN. It’s not a golf film, instead it’s the story of a devoted husband and father who always views his glass as half full. Maurice Flitcroft was certainly eccentric, but in a very charming way.

He tried his hand at many things, including painting, song writing and acrobatic stunt diving before marrying Jean. And he passed on his passion for trying new things to his children. Jean’s son, Michael, played by Jake Davies, was adopted by Maurice and later becomes his boss at Vickers Armstrongs.

He and Jean had twin boys who went on to compete internationally as a disco-dancing team. Gene (Christian Lees) and James (Jonah Lees) switched off as Maurice’s caddy during the British Open, ducking in and out of the bushes on the course to take turns.

Silliness abounds in THE PHANTOM OF THE OPEN, but it’s all in good fun. Following his initial quest to play in 1976, Maurice continued to enter under fake pseudonyms such as Gene Pacecki, Gerald Hoppy and Arnold Palmtree to name a few. The Blythefield Country Club in Belmont, Michigan named a tournament after Maurice, inviting him and his family as guests of honor in 1988.

British comedies can be a tad far-fetched, but with Rylance and Hawkins helming this one, it’s simply a joyful, highly entertaining affair. They are perfectly suited for these roles and their performances are stellar. Both of these actors know the importance of a well-crafted story and the solid portrayals necessary to ensure believability. They are seriously brilliant together.

THE PHANTOM OF THE OPEN is not a movie which needs to be seen on the big screen, but it is a wonderful treat for the entire family. It’s full of life lessons we can all take to heart.

Ordinarily Jeanne and I would say that you can’t write this stuff. A 46-year-old Brit, who never played golf in his life, decides to enter the 1976 British Open as a professional. He succeeds, shooting the worst ever score in the preliminary round, and manages to enter subsequent tournaments using various aliases and disguises. But guess what? THE PHANTOM OF THE OPEN is based on the true story of Maurice Flitcroft.

With the impeccable Mark Rylance as Maurice and the equally perfect Sally Hawkins as his wife Jean, prepare to be entranced by this feel-good, often hilarious story. And you don’t have to play golf to be entertained.

His job as a crane driver in England in jeopardy, Maurice looks to find another vocation to earn an income. While watching his new television set, Maurice stumbles upon a sports report showing American legend Tom Watson winning the 1975 British Open, a Grand Slam golf event to boot. He is hooked.

I don’t want to give too much away and spoil the film’s many surprises, but I can say it is more than just an impossible sports story. THE PHANTOM OF THE OPEN accentuates the importance of family as much as anything, and it is heartwarming --- much needed these days.

The screenplay by Simon Farnaby is based on the 2010 book written by himself and Scott Murray. Rylance, having worked with many legendary directors in his career, gives lavish praise to relative unknown Craig Roberts who directed THE PHANTOM OF THE OPEN.

The rest of the main cast includes Rhys Ifans as Keith Mackenzie, a golf administrator who is aghast at Maurice’s intrusion into the British Open despite Flitcroft’s ascent into the hearts of ordinary people everywhere. Maurice and Jean have an older son named Michael (Jake Davies) who is initially embarrassed by his father’s behavior and twin sons played by Christian and Jonah Lees. The twins happen to be world-wide disco dancing phenoms and the actors strut their stuff in the movie --- a true delight.

The real Maurice Flitcroft appears at the movie’s end in archival footage --- he passed away in 2007 at age 77. But Rylance’s performance as Maurice is a memorable one that should not be missed. This small film is on a par --- pun intended --- with much bigger budgeted pictures.