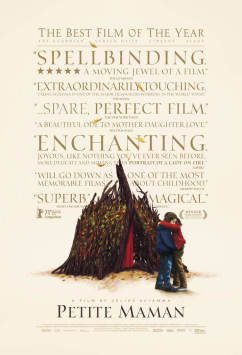 Following up her brilliant PORTRAIT OF A WOMAN ON FIRE (2019), writer/director Céline Sciamma has once again demonstrated her intuitive insight into the affairs of women, both young and old. PETITE MAMAN is a lovely and enchanting tale of two little girls who come together at a fortuitous moment in each of their lives.

Eight-year-old Nelly (Joséphine Sanz) has just lost her grandmother. As she and her mother (Nina Meurisse) are leaving the facility where her grandmother lived, Nelly takes the time to say goodbye to the other residents. Then they travel to her mother’s childhood home where Nelly’s parents begin the process of removing all her grandmother’s possessions.

All alone, Nelly explores the woods surrounding the home and comes upon another little girl her age named Marion (Gabrielle Sanz), who looks amazingly like Nelly. Marion is building a hut made out of large tree branches and Nelly offers to help.

When it begins to rain, Marion and Nelly run to Marion’s home, where Marion’s mother (Margo Abascal) makes them hot chocolate. But a sudden realization comes over Nelly and she runs home to find her father (Stéphane Varupenne).

In the morning when Nelly awakes, she learns from her father that her mother left during the night without saying au revoir. Trying to make sense of her mother’s abrupt departure, Nelly returns to the tree hut and makes some improvements while waiting for Marion to arrive. As the two girls grow closer, Nelly reveals her secret to Marion, who believes her despite its obvious fantastical elements.

At 72 minutes, PETITE MAMAN packs a powerful wallop. Sciamma’s beautiful writing is made even more meaningful by the performances of twins Joséphine and

Gabrielle. These two petite filles are light years ahead of their competition in their abilities to comprehend this delicate material and bring it to life on screen.

It has been documented that twins share a “special” language, but how these two beauties inform Sciamma’s script with their own magic is mesmerizing. They are beyond captivating with each tilt of the head, sweet little smile and genuine laughter speaking volumes as to how, from a very early age, women communicate.

It has also been well documented how much I love French films. PETITE MAMAN is up there now with the best. Sciamma is an incredibly gifted filmmaker. I shall be waiting with bated breath to see what she does next. In the meantime, make an effort to see PETITE MAMAN!