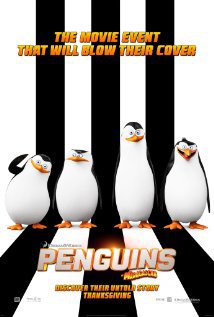 The penguins have always been my favorite characters in each of the Madagascar films. Obviously I'm not alone, as they now have their very own spin-off, "Penguins of Madagascar".

The opening sequence pokes fun at the "March of the Penguins" documentary, with three of our heroes falling out of line when an un-hatched egg slips away from the group. As the rest of the penguins happily follow one another to who knows where, Skipper (voiced by Tom McGrath), Kowalski (Voiced by Chris Miller) and Rico (voiced by Conrad Vernon) try desperately to retrieve the egg.

Dr. Brine, a.k.a. Dave, has a nefarious plan to kidnap all of the penguins around the globe. He's seeking revenge for his cruel treatment at zoo after zoo beginning with the Central Park Zoo in New York City. After the penguins arrived, he was no longer the main attraction, so he was continually shipped from one place to another, and his fragile ego never recovered.

Skipper and his crew take it upon themselves to save all of the captive penguins. They are joined in their efforts by an elite special forces group called The North Wind, led by the debonair Classified (voiced by Benedict Cumberbatch). He and his team have all of the slick gadgets at their command, but who actually has the better plan to defeat clever Dave?

The fun of "Penguins of Madagascar" is fast-paced and frenetic. There are many hilarious moments, and sight gags, none better than Skipper and his gang devouring a snack that closely resembles Cheetos, called "Cheesy Dibbles".

As they lay around, sated, an orange cloud envelops them, covering each in the snack's dust, and cough up puffs of it when they try to speak. Kind of resembles the ambience of an opium den, but I'm sure Dreamworks never had that in mind.

"Penguins of Madagascar" is hugely entertaining for kids, and adults should be mildly amused. Like most animated films these days, it drags a bit midway through, but I don't think the children will notice. However, I'm not convinced that paying extra for the 3-D version is necessary.