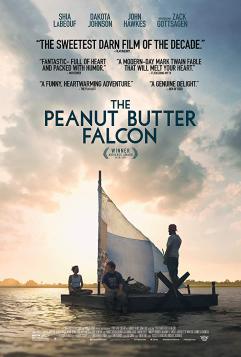 Zak, a young man with Down syndrome, lives in an assisted living home in North Carolina because his family deserted him, and the state didn’t know where else to house him. He “forces” his roommate, Carl (Bruce Dern), to continuously watch videos of his professional wrestling idol, The Salt Water Redneck (Thomas Haden Church). Zak’s dream is to attend Redneck’s wrestling school, and he continuously enlists the residence in his efforts to escape, which greatly frustrates his advocate at the residence, Eleanor (Dakota Johnson).

One evening he finally makes a clean break with Carl’s help. The problem --- he’s only dressed in his tighty whities. Undeterred, he runs and runs until he finds refuge under a canvas on an old boat at a dock in Manteo, NC. While he sleeps, the craft is commandeered by Tyler (LaBeouf) in his escape from Duncan (John Hawkes), a fisherman whose equipment he destroyed.

By the time Tyler discovers his stowaway, it’s too late and he must keep moving to avoid Duncan who has promised to exact revenge. Tyler agrees to allowing Zak to accompany if he vows not to slow Tyler down. Zak, who is still in his underwear, finally appropriates shorts and a T-shirt from Tyler and off they go.

Along the way, they pick up Eleanor, who has been sent by the facility where she works to find Zak. The three of them even manage to find Clint, a.k.a. The Salt Water Redneck, and convince him to coach Zak. To prove to Zak and the world that he can do this, Clint arranges a match between Zak and Sam (Jake Roberts), a fellow professional wrestler.

Nilson and Schwartz, who both wrote and co-directed THE PEANUT BUTTER FALCON, worked on this project for five years. They met Zack at a camp for disabled actors and he convinced them they should make a movie for him --- as the star. It wasn’t an easy task, because no one wanted to fund a movie with a disabled actor, suggesting the guys should get an established actor for the role. But they held firm and finally got the attention of Josh Brolin, then word got around.

THE PEANUT BUTTER FALCON is a very sweet movie. At times the screenplay gets a bit silly --- even absurd --- but all in all, it’s a good, entertaining effort. The success of THE PEANUT BUTTER FALCON lies in the performance from Zack --- and the terrific chemistry he develops with LaBeouf. They became friends in real life and that relationship transcends beautifully to the movie. They are totally delightful together. This is a great buddy movie as opposed to that stupid STUBER.

LaBeouf is on his A-game here. We firmly believe Tyler has formed this close friendship with Zak --- and that he is changing his ways. Though I have never been a fan, Johnson is better than usual as Eleanor. She, too, develops a great bond with Zack, which is apparent in their scenes together. She and LaBeouf aren’t exactly fabulous as a couple, but it’s not enough of a detraction to spoil the film.

Perhaps, THE PEANUT BUTTER FALCON isn’t one you necessarily need to run right out and see at the theatre, but it is definitely worth watching. When it shows up on Netflix --- or somewhere --- catch it. It certainly has a distinctly goofy charm.