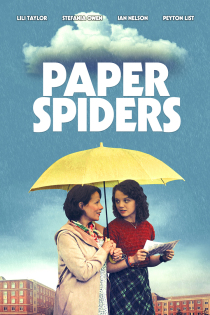 Based on actual events, PAPER SPIDERS, the collaboration of a husband-and-wife team, deals with a frightening subject that many of us will have to deal with as our parents get older. If you already know someone afflicted with illnesses like dementia, Alzheimer’s and delusional paranoia in general, you know the heartbreaking aspects of watching a loved one lose their mental capacity.

Inon and Natalie Shampanier co-wrote the script for this well-flowing story, and he also directs. They cast Lili Taylor in the lead as Dawn, a middle-aged single mother of Melanie (Stefania LaVie Owen) who is convinced her next-door neighbor is out to get her. It starts out with Dawn’s belief that the neighbor --- whom (appropriately) we never see --- is responsible for sideswiping a tree on her property, leaving a significant gash in the bark.

This relatively minor offense escalates to the point where Dawn is sure that the neighbor means to inflict physical harm on her and her daughter. She gradually alienates herself from everybody she knows, including her boss, Bill (David Rasche). As her paranoia spins out of control, she opts to live out of her car and eventually on the street as a homeless person. The depth of her delusions may be somewhat of an anomaly in terms of other sufferers, yet this particular story is based largely on Natalie’s own experiences.

Taylor’s performance is heartrending. In anyone else’s hands, Dawn could have been a caricature, but Taylor manages to convince us of the reality of this illness without going over the top.  As effective as Taylor is, however, I found that Owen’s challenge as the devastated daughter, Melanie, is the more difficult role to portray. She evinces a wide range of emotions while dealing with some typical situations that a high school teenager may encounter.

She is courted by Daniel (Ian Nelson), a handsome classmate who drives a fancy convertible and pursues her to the point of nausea --- at least on the part of the viewer. After eventually trusting him, Melanie learns her best friend Lacy (Peyton List) and Daniel have had a physical tryst. At her high school graduation, her mother appears unexpectedly, but that turns into a fiasco which humiliates Melanie in front of her friends. Owen renders a remarkable performance as she tries to deal with all this yet still seek help for her character’s rapidly deteriorating mother.

To be clear, PAPER SPIDERS is not all doom and gloom. It is strewn with colorful characters. In addition to Bill and Daniel, other memorable supporting roles include Mr. Wessler (Michael Cyril Creighton) as Melanie’s guidance counselor who must consult a massive tome to give advice. These sequences border on absurdity but offer some chuckles. Then there is Howard, (Tom Papa), a nerdy date for Lili whom she met online, and while their dinner together is uncomfortable it’s still very funny. Finally, there is Gary, (veteran actor Max Casella), as a private investigator hired by Lili, but to her great disappointment he finds nothing to corroborate her suspicions.

The Shampaniers have crafted a compelling screenplay and the ensemble cast does an exemplary job bringing it to life. Lili Taylor may walk away with some acting plaudits for her turn, but again, I was highly impressed with Stefania LaVie Owen’s sensitive and achingly realistic portrayal. She made her acting debut in Peter Jackson’s chilling THE LOVELY BONES (2009) at the tender age of twelve.