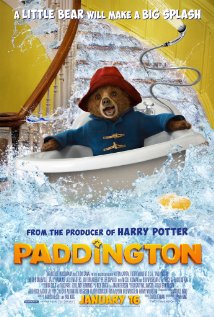 Stop whatever you're doing right now (which means reading this review) and get to the nearest theater showing "Paddington". Based on the ever-popular series of children's stories by British author Michael Bond, "Paddington" regales the audience, in splendid colors, with the delightful tale of this most precious bear --- a young Peruvian bear --- who travels alone to London, searching for a new home.

After arriving in London on a freighter from Darkest Peru, with a note around his

neck from his saintly Aunt Lucy (voiced by Imelda Staunton) that has "Please Look After This Bear. Thank You." written on it, the poor little bear (voiced by Ben Whishaw) finds himself alone and hungry in Paddington Station. Noticed by the ever-ebullient and positive Mrs. Brown (Sally Hawkins), who promptly names him Paddington (after the train depot because NO ONE can pronounce his "bear" name), and against Mr. Brown's (Hugh Bonneville) stern objections, Paddington goes home with the Browns, and their two children, Judy (Madeleine Harris) and Jonathan (Samuel Joslin).

Though Paddington is a charming bear with perfect manners, his lack of knowledge regarding indoor plumbing and other modern conveniences soon wreak havoc on the Brown household. Mr. Brown, fearing for the safety of his children, insists that Mrs. Brown take Paddington to the authorities first thing in the morning. But Paddington is convinced he can find the explorer, who years ago met his aunt and uncle in the rainforests of Darkest Peru, and left his battered red hat with Uncle Pastuzo (voiced by Michael Gambon), and make a new home with him.

Unbeknownst to all of them, an evil taxidermist at the National History Museum, Millicent (the always fabulous Nicole Kidman), is plotting the demise of sweet Paddington in revenge for her father's omission. Aided by the Browns' next door neighbor, Mr. Curry (Peter Capaldi), a plan is hatched to kidnap Paddington and stuff him.

Paddington Bear has been an iconic figure throughout many children's lives, beginning in 1958. His trademark red hat, which he inherits from his beloved Uncle Pastuzo, and his blue duffle coat, a gift from Mr. Brown, are intact in this wonderful adaptation, written and directed by Paul King.

So much care and attention has been brought to this production, destined to become a classic. This is the first time that Michael Bond has approved of his adored character being part of a motion picture. With the award-winning cast and crew assembled, it's no wonder.

The cast, itself, reads like a dream come true. Who can argue with the supreme talents of Whishaw (originally cast with Colin Firth as the voice of Paddington), Hawkins, Bonneville, Kidman, Staunton, Gambon and Capaldi? Add to these fine actors Jim Broadbent as Mr. Gruber, a Portobello Road antique shop owner, and the Browns' housekeeper played by the marvelous Julie Walters, and, really, what more can you desire? Harris and Joslin round out this amazing cast perfectly.

As I mentioned, the use of color in "Paddington" is a huge part of its appeal. Gary Williamson, the production designer and Oscar-winning Lindy Hemming, the costume designer, were very dedicated to the color concept --- giving each major character their own specific palette. Even the Browns' home is incredibly and delightfully colorful. Plus, if you're an Anglophile like me, the gorgeous shots all around London add a great deal to the overall experience.

Rarely does a film come along that I simply cannot wait to see again. "Paddington" is one of those films --- so, I'm off --- to watch that cherished little Peruvian bear once more!

"Fun for the whole family" is an overused cliche when it comes to movies. But in the case of "Paddington", the first-ever feature length film about the iconic Peruvian bear who travels to London looking for a home, there is no better description.

It's the first movie about Paddington because author Michael Bond, who wrote the 1958 book and subsequent series, had never before given his approval for a big screen version. Bond, who just turned 86, is cast in this film as the "kindly gentleman".

"Paddington" is rich with past Oscar winners Nicole Kidman, Jim Broadbent and Peter Capaldi, as well as previous Oscar nominees Sally Hawkins, Imelda Staunton, and Julie Walters. The wonderful Hugh Bonneville (Robert, Earl of Grantham on "Downton Abbey") and Ben Whishaw, fantastic as the voice of Paddington, round out the ensemble.

After his Uncle Pastuzo (voiced by Michael Gambon) passes away, the little bear's Aunt Lucy (voiced by Staunton) sends him away from his native Peru to London to find a home. He's sitting forlornly in a deserted train station in London when the Brown family happens upon him.

Henry Brown (Bonneville) implores his wife and children to ignore the bear at all costs, but Mary Brown (Hawkins) has other ideas. She convinces Mr. Brown to feed the poor bear in a station cafe, where she dubs him "Paddington" after the train stop.

With his irresistible looks and proper British accent --- no one, of course, bats an eye that this creature speaks perfect English --- Mrs. Brown, getting her way like most married women, further convinces Mr. Brown to take Paddington in for just one night until they can find him a proper home.

What ensues is a rollercoaster ride of hilarious Paddington hi-jinks and mishaps. Just when it looks like the Browns and Paddington could live happily ever after, enter the wicked Millicent (Kidman), a museum taxidermist with an ulterior motive, who goes after Paddington with the intent of stuffing him for London's Natural History Museum.

The creation of Paddington is all CGI, of course, but the massive visual effects and animation crews seamlessly integrate him into the live action with the rest of the cast. It's a truly marvelous production under Framestone, the British company responsible for the effects in "Gravity".

Much of the joy of "Paddington" is seen in the terrific little touches throughout the film. Whether it's the painted leaves on the wall of the Brown home flying off as winter approaches, or Paddington all fluffed up from a hair dryer after his bath, or Paddington dunking his head in a toilet bowl after drinking a whole bottle of mouthwash --- it's hugely entertaining.

Character actor Matt Lucas plays a taxi driver with Millicent as his fare. It's a brief but oh-so-funny scene. Lucas happened to be born in an area of London called Paddington, as were the likes of Emma Thompson, Kiefer Sutherland, Joan Collins, Alfred Molina and Elvis Costello, as well as Alan Turing, the subject of "The Imitation Game" --- but I digress.

Don't wait to see "Paddington" on the big screen. It's a charming, uproarious and totally delightful time at the movies, destined to be a classic. You could even say it's fun for the whole family.