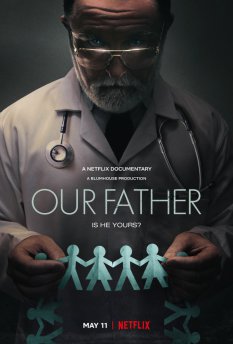 Filmmaker Lucie Jourdan, making her directorial documentary debut with OUR FATHER for Netflix, has chosen to bring to light the horrific story of one doctor’s vile betrayal of his patients. Dr. Donald Cline, a highly regarded fertility specialist practicing in Indianapolis, Indiana, had been inseminating women with his own semen, without their knowledge.

It all began when Jacoba Ballard, an only child conceived via donor sperm, wanted to learn if she had any half siblings. Following a “23andMe” DNA test at home, she found out that in fact she had seven new half siblings, a number which defied the unwritten rule applied by most clinics that the same donor is only used three times.

As this small group expanded its search, it quickly became apparent that Cline was using his own sperm even when the husband had contributed his semen for the procedure. Shock and disbelief doesn’t begin to describe what these now adults experienced after detecting the truth. Even Cline’s own partner and staff didn’t know what he was up to --- which boggles the mind.

Many documentaries have abhorrent storylines --- and OUR FATHER is right up there with the worst. Not only did Cline commit these heinous acts, but he threatened the very children he fathered --- and the journalist who was helping to expose him. As the number of half siblings continued to grow --- exponentially --- his actions to stop any further repercussions become even more egregious.

Of course, there are those who don’t believe the truth, and continue to defend Cline --- he is an elder in his church, after all (like that means anything) --- and there were no laws in Indiana for which he could be punished. For these victims it has been one travesty after another. But they have formed a bond that can never be broken.

Jourdan and her team have done an exemplary job conveying the anguish and grief traumatizing Jacoba and the unfathomable number of half siblings. Cline, unfortunately, is not alone. There are at least 44 other doctors around the world who have engaged in this loathsome practice.

It's disrespectful, appalling and, most importantly, a sexual violation. One woman who was inseminated 18 times declared that she was raped 18 times. Cline practiced until 2009. Who knows how many more children of his are out there? It’s a chilling realization --- and a truly heartbreaking one.

When Jeanne and I sat down to watch a documentary called OUR FATHER, I had no idea as to its premise. As the story moved along briskly, I found my heart rate increasing and my mind racing. What is happening here? After witnessing several interviews with a few key individuals --- mothers and their grown children --- I had my answer.

OUR FATHER is a horror show of epic proportions involving an Indiana fertility doctor named Donald Cline and the people with conception issues who sought him out. Mothers who could not become pregnant counseled with Cline. He was a noted expert in the field of fertilization and came highly recommended.

Women were told they would be inseminated with the sperm of anonymous donors --- no more than a total of three times. Cline lied. Even when the husbands provided their sperm Cline still chose to use his own. Don’t be shocked as the sibling count in the film continues to rise.

The efforts of two courageous women led to the public exposure of Cline’s despicable actions of creating half-brothers and half-sisters who shared very similar physical characteristics. Some were even victimized by Cline’s less-than-par immune system. And as the film suggests, what if these half siblings unknowingly entered into a marriage?

The film starts off with an interview of Jacoba Ballard listed as Sibling #1. She was the first of Cline’s victims to realize that something wasn’t right. When she employed a home DNA test in search of possible half siblings, she was shocked to find seven matches. Jacoba eventually presented her story to the media with only a single journalist taking it seriously. That was Angela Ganote, a FOX TV reporter who realized that this was a horror that had to be exposed. She interviewed Cline even though he carried a gun to their meeting.

OUR FATHER, by necessity, employs actors at times, particularly Keith Boyle as Donald Cline for certain re-creations. But the real people affected by this monstrous physician give devastating testimony about how their lives have been forever altered.

OUR FATHER is not easy to watch. However, it is intriguing to anticipate the results of a potential arrest and/or trial of Donald Cline, and especially what motivated him? As with any good documentary, much more is revealed in the closing credits. Despite new laws created to criminalize this type of activity, there is still no federal law prohibiting such behavior. The filmmakers reveal that 44 doctors around the globe have committed the same offense.

Director Lucie Jourdan was initially unsure of even making this doc. But as she sat down with victim after victim --- crying along with them, at times --- she knew the story of OUR FATHER had to be available to a wide segment of society.