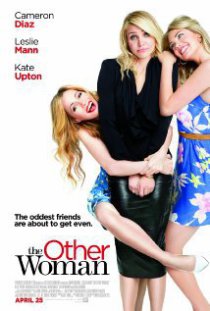 Any film about a wife and two mistresses going after a serial cheating husband sounds good to me! Though "The Other Woman" isn't quite as non-stop hilarious as "Bridesmaids", it's still highly entertaining. My illustrious partner just doesn't get the humor, but, hey, who cares --- again?

Cameron Diaz, looking particularly dazzling, plays Carly Whitten, a hard-working attorney, living in Manhattan, who falls for Mark King (Nikolaj Coster-Waldau), who just happens to be married to mousy chatterbox Kate (Leslie Mann). Carly has no idea Mark is married and Kate has no clue that Mark has been cheating.

Carly and Kate meet accidentally on a Friday night when Carly shows up at Mark's home in Connecticut to help him with his "plumbing". When they put two and two together --- mostly accomplished by Carly because Kate is in severe denial --- they begin to plot their revenge. Then, they find out there's

another girlfriend, Amber (the statuesque Kate Upton of Sports Illustrated fame), and as soon as she learns about Mark's unfaithfulness --- she's in!

What I don't believe most men (and let's face it --- most critics are of the male persuasion) get  is "The Other Woman" is really about women and their friends. Women need other female friends, especially in times of crisis, like finding out your husband is a louse.

Is "The Other Woman" the funniest movie of the year? I hope not, because it is kind of silly/stupid in parts. But I loved it nonetheless. I have never been a huge Diaz fan, but she is great fun,. and quite stylish, in this role. She and Mann are a hoot together, and play off one another nicely. Upton's portrayal of the ditzy blond bombshell is perfect. In one scene, as the three of them are spying on Mark in the Bahamas, she's watching dolphins instead --- in true blond fashion. And I can say that because I'm a blond.

"Chicago Fire" star Taylor Kinney (and boyfriend to Lady Gaga) does a fine, subtle job as Phil, Kate's hunky brother, and love interest for Carly. He has a terrific screen presence and doesn't try too hard, which makes him ideal for this role. Coster-Waldau is sufficiently gorgeous to make the cheating all believable. Known for his current role as Jaime Lannister on "Game of Thrones", he is just smarmy enough to make us root for his take-down.

I loathe --- absolutely loathe --- the term "chick flick", but I gotta say "The Other Woman" fits the bill. Get a bunch of your girlfriends, go see this movie, then head out for a cocktail! You'll have a blast!

Opinion: See It Now! (girls only)

When the best part of a movie is the music, something isn't right. At the midpoint of "The Other Woman", there is an extended playing of the "Mission Impossible" theme song from the original TV show, and it happily jolted me out of my stupor.

You have Jeanne's synopsis of this new Cameron Diaz feature, and contrary to her opinion, I didn't think it was all that funny. However, most of the women at our screening were laughing continuously, so I suppose that makes "The Other Woman", as Jeanne writes, a true "chick flick".

I have always liked Diaz. She is consistently reliable, whether in a dramatic or comic role. She is completely credible as Carly, one of a trio of ladies victimized by the cheating Mark King (Nikolaj Coster-Waldau), whose performance is appropriately unctuous. But Leslie Mann, portraying Mark's wife Kate, is over-the-top whiny and frenetic  --- her act only goes so far, and in this film, it goes too far, for too long.

The other key females are Kate Upton, of Sports Illustrated cover girl fame, as the bosomy girlfriend named Amber, whom King strings along with the others, and Nicki Minaj as Carly's secretary, Lydia. As for the casting of Upton and Minaj, how did they ever pass an audition? Their acting is simply awful.

The best performance in this film is from Taylor Kinney as Kate's brother, Phil. He is not the jerk that Mark is, and generates realistic interest in Carly. He is natural and believable. Don Johnson has a basically throw-away part as Carly's father, Frank.

The build-up to the conclusion in this movie, as the girls discover what is going on, is tedious, at best. And when they finally exact their revenge on Mark, it's not funny and not pretty.

The obvious comparison here would be to "Nine to Five", the Dolly Parton/Lily Tomlin/Jane Fonda vehicle from 1980, although that script involved employees getting back at their sexist boss. But it's a classic film that is far more entertaining than "The Other Woman".