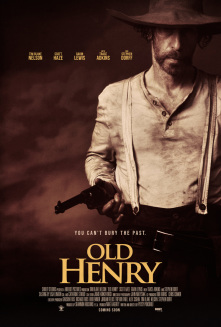 Ahhhhhh --- who doesn’t enjoy a good Western? And since there are so few these days, writer/director Potsy Poncirpoli’s well-crafted OLD HENRY is a welcome respite from all the comic book offerings recently. Don’t get me wrong, I love MCU movies as much as anyone who appreciates that genre --- David notwithstanding --- but a gripping Western definitely has its place in the wide world of film.

Plus, when that Western stars Tim Blake Nelson, one of the best character actors in the business, then there is no doubt that Ponciroli has a surefire hit. Nelson plays Henry, a widowed farmer dedicated to making a life for himself and his teenage son, Wyatt (Gavin Lewis), in the Oklahoma Territory, 1906.

Henry’s deceased wife’s brother, Al (Trace Adkins), lives on the spread next door and spends much of his time hunting, something Wyatt would rather be doing than farm chores. The appearance of a riderless horse changes everything for these three men, especially Henry, who must resurrect his skills with guns, a side of him Wyatt has never seen.

Nelson’s craggy looks and sleight frame belie the fact that he is capable of great things on the big screen. His impenetrable eyes, steadfast countenance and unruffled demeanor betray noting. He’s a joy to watch and commands every scene he’s in. When Wyatt blames Henry for what he perceives as their miserable existence, Nelson’s behavior ever so slightly tugs at the heartstrings as Henry comes to grips with Wyatt’s desire for a different lifestyle.

Westerns have always had the advantage of luscious landscapes to enhance their worth. And Director of Photography John Matysiak takes full advantage of the grasslands of Waterford, Tennessee where OLD HENRY was shot. Add to that the true-to-the-period production designs of Max Biscoe and the affecting score by Jordan Lehning and OLD HENRY has all the earmarks of a memorable gunslinging drama.

OLD HENRY is a modern-day Western that takes place in 1906. Henry McCarty (Tim Blake Nelson) is a widower with a headstrong son named Wyatt (Gavin Lewis). Together they run what is essentially a pig farm in a rural Oklahoma setting.

When a horse shows up at their farm without a rider, Henry goes in search of the missing owner. In a field he espies what appears to be a dead body which we learn he is the very much alive Curry (Scott Haze). Henry seems to have the wise instincts of a medical doctor as  he manages to get the wounded Curry to his farmhouse. Curry eventually awakens in a fit of confusion and rage, attacking Wyatt, which prompts Henry to tie him up and wonder if he can be trusted. A visit to the farm from three apparent lawmen, led by a man named Ketchum (Stephen Dorff), adds to the mystery as they announce they are looking for this very dangerous man.

OLD HENRY is a showpiece for Tim Blake Nelson, who also executive produces. I have yet to see Nelson in a bad film. Over 21 years ago he was featured in one of my favorites --- O BROTHER, WHERE ART THOU? --- alongside George Clooney, and more recently in THE BALLAD OF BUSTER SCRUGGS (2018), a Coen Brothers gem.

In OLD HENRY, Henry fears no one and harbors a deep, dark secret which is revealed in the final frames. In fact, OLD HENRY is full of surprises. If you crave a good old-fashioned shoot-em up, this is it. It’s a film with rich dialogue courtesy of writer/director Potsy Ponciroli.

While OLD HENRY is very much about a father trying to protect his son and raise him properly, it is primarily a story about good versus evil where the bullies get their comeuppance --- and well deserved.

The movie has its share of tense moments, but when Henry’s brother-in-law, Al (Trace Adkins), warns the thugs that they have no idea what a sh**-storm they’re about to release --- it foreshadows the very exciting and well-choreographed conclusion.

Do not be deterred by the film’s plodding start. Once Nelson’s character hits his stride, OLD HENRY quickly evolves in a guns-a-blazing, entertaining Western with a couple of unexpected twists.