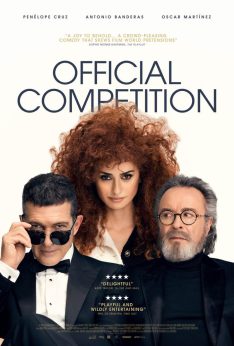 What happens when an elderly billionaire, Humberto Suárez (José Luis Gómez) becomes concerned about his legacy? Well, he decides he’s going to produce a film with only the best people --- to ultimately become the best movie. OFFICIAL COMPETITION is a dark, satirical comedy/drama with an edgy, sometimes hysterical, screenplay by Andrés Duprat written in conjunction with directors Gastón Duprat and Mariano Cohn.

Lola Cuevas (Penélope Cruz) is the filmmaker of the moment. So naturally Suárez recruits her for his project. Obsessed with perfection, two of the most famous actors are also enlisted; the very handsome Félix Rivero (Antonio Banderas), a Hollywood heartthrob, and well-known theatre thespian, Iván Torres (Oscar Martínez), who have larger-than-life egos. They are both legends in the industry, but they are not friends.

The story of OFFICIAL COMPETITION is centered around the rehearsals Lola conducts leading up to the filming of this hopeful masterpiece. Her bizarre ideas and antics designed to drive these two egotists crazy are fantastical. For one, she has the two of them wrapped up tight together in cellophane so they can’t move --- or talk --- and makes them watch her destroy their --- okay, so I’m not going to divulge that. You’ll just have to see OFFICIAL COMPETITION to find out. But trust me, it’s worth seeing the film for this scene alone.

Cruz has simply never been better. And that’s saying a lot following her last performance in PARALLEL MOTHERS. Whomever designed the huge, crazy-ass wig for Lola is brilliant. It’s a hoot --- perfect for the wild and unpredictable Lola. One can only imagine the amount of fun these three had filming OFFICIAL COMPETITION with Cruz leading the way. It’s a terrific opportunity for her to show off her comedic chops.

And there is just no denying Banderas’ immense talent. I’ve written this about him so many times over the years, but it is absolutely a fact. It doesn’t matter which character he’s playing or the genre, his precision and scope is unparalleled. Félix is so obnoxious, it’s hilarious, but Banderas never puts him over the top.

Because he is an actor in the theatre, Ivan believes in his superiority, taking every chance to rankle Félix. Martínez revels in this role, playing the conniving competitor with aplomb. While Félix goes home to his hot girlfriend, Ivan spends his evenings with his wife, the author of children’s books, whom Félix mistook for a lesbian, in one of the more humorous, albeit uncomfortable scenes.

OFFICIAL COMPETITION is definitely my kind of movie. It’s darkly entertaining with incredible acting --- and writing. Most importantly, it stars my heartthrob, Antonio Banderas, even though Penélope Cruz steals the film.

In theaters June 17th and scheduled for VOD

This intriguing Argentinian film opens with a wealthy businessman named Humberto Suárez (José Luis Gómez), who has just turned 80, musing about how he will be remembered. He thinks about having a bridge named after him but opts for financing a movie. However, the movie must feature two of the best actors available and a well-known respected director.

He hires a driven director named Lola Cuevas (Penélope Cruz) and the actors are Félix Rivero (Antonio Banderas) and Iván Torres (Oscar Martínez). The egocentric men don’t like each other --- Rivero is a film idol while Torres is a theatre giant --- and things don’t get any better as they begin rehearsals. Hence, OFFICIAL COMPETITION is underway.

While the hard-nosed Lola insists on take after take to satisfy her instincts, the audience is privy to the techniques and self-imposed paces the actors put themselves through in order to demonstrate emotion to their viewers. OFFICIAL COMPETITION is rich with many ironies piled on top of one another, but it would be inadequate and a disservice to the clever script (written by Andrés Duprat along with co-directors Mariano Cohn and Gastón Duprat, Andres’ younger brother) to try and explain the intricate scenarios within.

Cruz, Banderas and Martinez make for a comedic, tongue-in-cheek trio. How did they ever manage to keep straight faces in their many scenes together? There is one more vital character --- a non-human one. It’s a heavy-duty shredder and wait until you see what Lola plans to do with it!

In theaters June 17th and scheduled for VOD