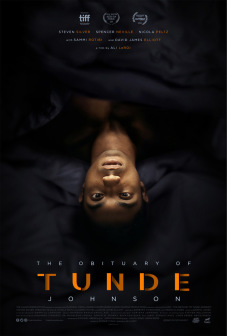 Written by 19-year-old Stanley Kalu, a Nigerian-born student attending USC, THE OBITUARY OF TUNDE JOHNSON was the first winner of THE LAUNCH: Million Dollar Screenplay Competition in August of 2018. Besides a $50,000 education grant, the contest also guaranteed literary representation, along with a million-dollar budget for a feature film. Principal photography for THE OBITUARY OF TUNDE JOHNSON began in October of the same year.

Tunde Johnson (Steven Silver) is a Nigerian-American teen with two doting parents. His father, Ade Johnson (Sammi Rotibi), a well-known, very successful artist, and his mother, Yomi (Tembi Locke), are shocked to learn that their only child, Tunde, is gay.

He was encouraged by his best friend, Marley Meyers (Nicola Peltz), to tell his parents, and of course they are somewhat disappointed because they were hoping Tunde and Marley could be a couple. Marley is obsessed with Soren O’Connor (Spencer Neville), the star of their high school lacrosse team, but Soren and Tunde are secretly in love.

On his way to Soren’s birthday party, Tunde is pulled over by two white police officers, one of whom shoots and kills Tunde as he reaches for his ringing cell phone. The twist --- he immediately awakens in his own bed,  and relives the day over and over again.

Directed by Ali LeRoi, who was also one of the judges for THE LAUNCH, THE OBITUARY OF TUNDE JOHNSON is completely and utterly engrossing. As a nation, I feel we have become inured by the overwhelming number of deaths suffered by Black men at the hands of white police officers. It’s unforgiving and inexcusable, and Kalu makes sure the audience reels in the shock and horror of these needless killings.

I’m not suggesting that THE OBITUARY OF TUNDE JOHNSON is too difficult to watch, although each time Tunde is shot it is still sudden and unnerving. I’m stating that we, the audience --- especially those of us who are not Black --- are provided a unique perspective of what Black men must face every day of their lives.

Tunde is impatient when he is first pulled over. He’s late for Soren’s party and he just wants the cops to give him the ticket for whatever traffic violation they believe he’s committed --- though, of course, he’s not done anything wrong. What ensues happens so quickly that we are left rattled and in disbelief. In this way, Kalu has very effectively brought this all-too-often tragedy to bear.

But THE OBITUARY OF TUNDE JOHNSON doesn’t just address the issues of racism and police brutality. It also focuses on LGBTQ acceptance, drug addiction and mental health. Kalu has bitten off a huge chunk of the relevant social dilemmas facing Black youth today with his amazing screenplay, and LeRoi doesn’t disappoint with his directing.

Silver, Neville and Peltz comprise quite a believable love triangle. Without their heroic efforts, no matter how good Kalu’s screenplay is --- and it’s exceptional --- THE OBITUARY OF TUNDE JOHNSON would not be as hard-hitting and meaningful as it is. Every time Silver reawakens as

Tunde --- and each day is a tiny bit different --- Kalu has another opportunity to tell his truth.

There is a new and very talented writer in our midst named Stanley Kalu. As a student at the University of Southern California at age 19 he submitted an original script in a competition that earned him the first-place prize of $50,000 and a guarantee that his story would be made into a movie with a minimum budget of one million dollars. That movie is now a reality and it’s called THE OBITUARY OF TUNDE JOHNSON.

When Kalu came to the United States from his native Nigeria he was consumed with the news that young Black men were being victimized by police over and over --- thus the inspiration for his film. The movie showcases the extreme pressure of being not only a Black man in today’s America but the stigma of coming out to family and friends as a gay man as well.

It first appears that the killing of George Floyd in 2020 may have been the impetus for Kalu’s script, but that event occurred several years after the film was made. Earlier police brutality where the phrase “I can’t breathe” was born does emerge in THE OBITUARY OF TUNDE JOHNSON.

Tunde (Steven Silver) is stopped by police one evening for virtually no other reason than he is Black. When he steps outside of his vehicle while one officer phones in his driver information a second officer shoots him dead at point blank range when Tunde reaches for his cell phone. Except Tunde is not really dead or even been shot – he is victimized by a recurring nightmare where he experiences the same fate.

Each time he awakens Tunde delves deeper and deeper into his life, especially his relationship with high school classmate Soren O’Connor (Spencer Neville). One memorable scene has Tunde meeting Soren’s father Alfred (a terrific turn by David James Elliott) and revealing that he and Alfred’s son are gay lovers. A second jarring scenario --- after yet another nightmare --- involves Soren and Tunde visiting Alfred so that Soren can come out to his dad even though he happens to be a star lacrosse player with a girlfriend. Neville’s performance here makes for a gut-wrenching episode.

Marley Myers (Nicola Peltz), a high school beauty, is aghast when she finds out the truth because she believes Soren loves her. To complicate matters she and Tunde have been best friends since childhood. So Kalu’s story, indeed, has many facets to it.

Emmy-winning director Ali LeRoi has elicited excellent performances from his entire cast. We believe Tunde and Soren are a loving couple and we sense their anxiety and frustration at the difficulty of coming out. Both Silver and Neville make it look effortless and natural to be in a gay partnership when they share moments of solitude. Marley draws our sympathy because she is caught in a no-win position not of her making, and Peltz is superb in the role.

THE OBITUARY OF TUNDE JOHNSON is surprisingly riveting considering the anguish of being Black and/or gay has been done before. But Kalu’s take on the matter, along with LeRoi’s direction, is creative, fresh and very welcome. Jeanne frequently talks about the writing --- either ranting or raving --- and there is no doubt she will be singing the praises of Kalu’s screenplay.

One interesting irony of Kalu’s script features Elliott’s character Alfred O’Connor as a TV news host discussing racism in this country with a group of panelists. Again, I found Elliott’s performance to be significant because we’re not sure how Alfred will react if and when he finds out the truth about his son. It’s one more aspect of the film that makes it compelling for the viewer.

THE OBITUARY OF TUNDE JOHNSON debuted at TIFF (Toronto International Film Festival) in 2019 and is scheduled to begin streaming in the U.S. on February 26th.