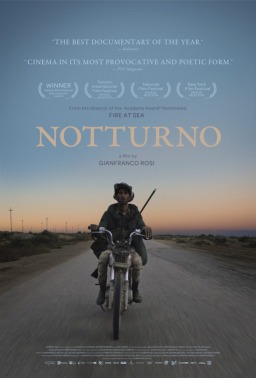 Director Gianfranco Rosi states in his comments that “NOTTURNO is a political film, but it does not aim to take on the question of politics.”. Over a three-year period, Rosi shot his documentary along the borders between Iraq, Syria, Lebanon and Kurdistan to illuminate the daily suffering of people forced to live their lives amongst the ruins of constant warfare.

Eschewing the use of interviews --- and basically any script --- Rosi and his camera follow a mix of men, women and children, documenting their struggles. One such subject, Ali, is a teenager who must work from dawn until well into the night to provide for his mother and siblings. In other footage we witness Islamic State terrorists warehoused in a ramshackle prison, and a mother terrified for her daughter who is still an ISIS prisoner.

NOTTURNO never focuses on the ongoing wars. Rosi instead casts his attention on the resulting tragedies. A doctor in a psychiatric hospital writes a play about the politics of the region and has his patients perform the roles. Children in school bear the burden of the constant fighting between the Shiites, Alawites, Sunnis, Yazidis and Kurds. They are forever scarred by the barrage of hatred and fear permeating their homeland.

But as much as Rosi wields his camera like a paintbrush, creating lustrous visuals of a war-torn land, NOTTURNO feels more like a Lars von Trier fantasy, full of stunning cinematography, than a realistic expose of lives in ruin.

NOTTURNO is available On Demand and Hulu beginning January 29th.

Documentary filmmaker Gianfranco Rosi, from the east African country of Eritrea, has one Academy Award nomination to his credit for a movie entitled FIRE AT SEA (2016).  His latest effort is called NOTTURNO, an Italian word for “in the night” or “nocturnal” --- but I don’t see this film garnering any awards from the Academy.

This director does his own writing and more importantly his own cinematography, preferring to work alone with his camera until something happens. His goal in NOTTURNO was to capture reactions from survivors of the religious wars plaguing the Middle East and the ongoing wave of terror initiated by the Islamic State (ISIS) and evil dictators --- is there any other kind? In Rosi’s own words, “I have attempted to recount the everyday life of those living along the border that separates life from hell”.

Over a three-year period, Rosi’s borders included the countries of Lebanon, Iraq, Syria and Kurdistan. It clearly didn’t matter to Rosi that much of what he shot were long, slow, often static images where virtually nothing was going on. I can only imagine what footage he edited to produce the final cut. Let’s put it this way --- director Terrence Malick would be proud.

To quote Rosi again: “I attempt to tell the stories of humble people who live at the gates of hell, not those of powerful men”. The powerful men he refers to are, at least in part, the ISIS thugs who routinely inflict inhuman brutality on their captive subjects. So, we do not see anything as it relates to the actual atrocities of ISIS, for which we should be grateful, but these are relayed to the viewer in other ways.

The most graphic of these are children and their pictures where they have recalled what they observed and frequently experienced first-hand. A young teacher interviews girls and boys of elementary school age who describe in words and drawings the torture and beatings they and others incurred at the hands of ISIS. One particularly disturbing depiction involved the severed head of one unfortunate man and the child says he was ordered to eat it. In another conversation, the teacher elicits from two young girls that women had the soles of their feet burned.

This teacher’s questioning of these children is the closest thing to an interview in Rosi’s doc because he himself does not ask questions or conduct interviews, staples of virtually all documentaries. Of course, the shame of all this is that 10-year-old kids should be drawing pictures of themselves playing with friends or recapturing wonderful family moments, not recounting horrible, life-scarring memories.

Another complaint I must mention is that Rosi is not explicit about what we are witnessing --- no text overlays or narration. In one elongated scene, scores of prisoners dressed in orange jump suits from head to toe are allowed to exit their confines into an open courtyard for minimal exercise and a breath of fresh air. A few heavily armed guards stand watch until the prisoners return to their designated incarceration area. Jeanne and I both assumed these men were being held captive by ISIS.

It turns out that opposing forces of ISIS were the keepers of the prison, not the other way around. Only after reading the film’s production notes was it clear that the prisoners were captured Islamic State terrorists.

NOTTURNO is Italy’s entry into the 2021 Academy Awards for Best International Feature --- Italian Eritrea was once a colony. And the movie was an official selection at a number of major film festivals in 2020. However, I did not find Rosi’s documentary to be a compelling look at the interminable struggle for religious superiority in the Middle East.

Aside from only a few aspects of his film it is mostly a dull cinematic experience.

NOTTURNO is available On Demand and Hulu beginning January 29th.