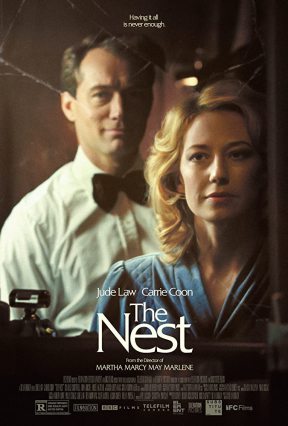 Written and directed by Sean Durkin, THE NEST is his first full-length film since his critically acclaimed feature MARTHA MARCY MAY MARLENE, for which he won Best Director at the 2011 Sundance Film Festival. David and I were huge fans of MARTHA MARCY MAY MARLENE, a taut thriller starring John Hawkes and Elizabeth Olsen. Durkin has managed to follow that success with an equally intriguing depiction of a marriage on the brink of collapse.

It is 1986 and commodities broker Rory O’Hara (Jude Law) abruptly announces to his wife, Allison (Carrie Coon), that he wants to move from their comfortable suburban life in America to the UK, his native country. Things are really happening in London, according to Rory. Deregulation has created a plethora of financial opportunities, and though they are better off than most in their current situation, Rory wants --- needs --- more.

Having already made arrangements to join his old firm, Rory travels ahead and rents a huge old manor home in Surrey with acreage for a stable. Allison follows with their two children, Samantha (Oone Roche) and Benjamin (Charlie Shotwell) and her gorgeous horse. Rory dives right in with a significant deal that could make him and his boss a lot of money, but as that begins to unravel, so do all the lives around him.

As I have repeatedly said, it’s all about the writing, especially in dialogue-driven stories such as THE NEST. Durkin is a master at creating tense atmospheres exacerbated by explosive wordplay, no more so than when Rory shrieks at Allison that he deserves to have a better life because he had a terrible childhood.

What Rory doesn’t realize --- until it’s too late --- is that no one is currently happy with their new circumstances. Allison suffers a great personal loss and Rory is totally unaware. Neither Benjamin nor Samantha like their new schools, even though Benjamin is enrolled in a prestigious academy that Rory wished he could have attended. In other words, everything Rory has done --- has been done to make Rory happy.

Durkin has crafted a juicy character for Law. There is a great deal here for him to work with. From playing the attentive husband who brings his wife coffee every morning to the wheeling and dealing financial wizard, Law brings a definite gravitas to this role as only he can. He has maintained that boyish charm --- and good looks --- from his earlier romantic comedy roles, but his ability to turn on a dime into an angry, vengeful person is not lost on anyone.

Law’s chemistry with Coon is not perfect, but it’s acceptable enough that it doesn’t affect the tenor of the film. She, herself, does a marvelous job as Allison, especially when the timeline of events in their hasty move come together. It is riveting to watch her come to the realization that all of this had been in the works for quite a while without her knowledge.

Durkin’s narrative about a family unraveling in THE NEST isn’t necessarily depressing like MARRIAGE STORY, it’s more of a cautionary tale. As we muddle through this pandemic, it’s paramount that we remember what is important in life --- the people we love --- and Durkin has made a strong case for that.

The truth is I would watch any film or TV show featuring Jude Law. He is such an accomplished actor and a likeable screen presence despite appearing in some less than exemplary movies. THE NEST is a good showcase for him as the embattled husband/father Rory O’Hara whose best-laid plans do not always work out.

Directed and written by Sean Durkin (his cult film MARTHA MARCY MAY MARLENE from 2011 earned him the Prix Regards Jeune award at Cannes and propelled Elizabeth Olsen’s career), THE NEST is a reasonably intriguing look at a marriage that spirals into freefall after the breadwinner’s last gasp idea falls flat.

Rory’s wife Allison (Carrie Coon) is appropriately skeptical of the family’s move to the UK from what appears to be an idyllic life in America, until we learn that Rory’s last project failed. So, when he regroups with his previous company in London, he promises the firm’s owner, Arthur Davis (Michael Culkin), that he has a foolproof plan to make Davis wealthier than he already is --- but ---

It’s a big “but” because it involves Davis selling his firm. This is a critical element and ultimately leads to a crucial turning point in the story which I won’t reveal here. Meanwhile, Rory is overly enthusiastic about his idea to the point he risks everything on “the come” --- any gambler will tell you, unless it’s your strategy at the craps table, this a dangerous practice.

When Allison and their two kids, Samantha (Oone Roche) and Benjamin (Charlie Shotwell), join Rory in England in 1986, he is exuberant about the expansive mansion he has leased --- with an option to buy ---- and proud he has prepaid the rent for a full year. He also promises to build Allison a stable for her favorite horse.

However, his wife and the children do not share Rory’s excitement. As things begin to unravel, Allison becomes more and more disenchanted with Rory to the point she frequently humiliates him in front of business partners and others. Her actions also sabotage a back-up plan Rory has with a friend.

THE NEST manages to hold our attention if only to reveal how this once-promising situation, now rapidly deteriorating, will conclude. Law and Coon are authentic as a seemingly happy couple, and equally credible as their thin veneer of a marriage starts to crumble. As in real life, children are always collateral damage in a problem relationship and the young actors portraying Samantha and Benjamin very effectively portray kids at their ages who are miserable with their parents’ decisions.

As Rory tries desperately to navigate the quicksand that is rapidly engulfing him, Law delivers another engaging performance matched by Coon’s own turn.