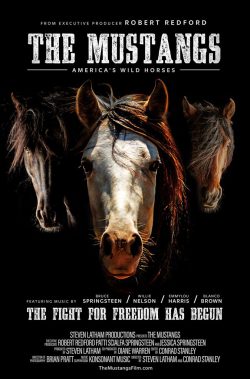 Imagine the most spectacular vistas of the western United States. Now, imagine those same vistas populated with the most beautiful four-legged animals on the planet, specifically the wild mustangs. THE MUSTANGS: AMERICA’S WILD HORSES is an engrossing documentary which takes the viewers to places in the west that few people have ever seen and introduces them to these free souls whose existence is in peril.

David Philipps, an award-winning New York Times journalist and author of “Wild Horse Country” (2017), lays out the plight of the “King of the Plains”. During the 1970’s the mustang almost became extinct. Their numbers have been declining for decades after World War I, when thousands were shipped to Europe to be used in the war. Then following the Great War, the need for horses as transportation also affected their numbers.

Herds were being rounded up and slaughtered for dog food. THE MUSTANGS: AMERICA’S WILD HORSES includes a clip from the 1961 film THE MISFITS, starring Marilyn Monroe and Clark Gable, a movie I’ve never been able to watch because of the way these wild horses were roped and tied --- horribly mistreated and sent off to slaughter.

One woman, Velma Johnston, began a movement to save the mustang. Because of her determination and perserverance she became known as “Wild Horse Annie”. And she was smart --- she enlisted children all over the country to join her crusade by writing letters to Congress. The result was the passage of the Wild and Free-Roaming Horses and Burros Act of 1971, which made it a federal crime to kill a wild horse.

Unfortunately, with no natural predators, the number of wild mustangs has been steadily increasing since then. As of now, it is estimated that more than 80,000 live on federal lands and another 50,000 are in government corrals. This is becoming a huge problem, because at this rate, if something isn’t done to curtail their population growth, these wild horses will not have enough natural resources of food and water to survive.

One solution currently being used is the darting of the fillies in the herds to prevent fertilization. Groups of volunteers --- mostly older women, of course --- are engaging in this activity, which doesn’t hurt the horses, but has definitely shown results. These dedicated people must keep track of the females they’ve shot and make sure they repeat the process. It’s a start in the right direction, but it’s not enough.

Directors Steven Latham and Conrad Stanley introduce the viewers to many of the support groups dedicated to protecting the wild mustangs, including the Mustang Heritage Foundation, the Wyoming Wild Horse and Burro Program, the Sand Wash Basin Wild Horse Advocate Team (SWAT) and Operation Wild Horse. These are the organizations working to train mustangs for adoption or purchase, controlling the population and helping veterans with PTSD.

Robert Redford, who narrates the opening and closing comments, serves as Executive Producer along with Patti Scialfa Springsteen and her USA Olympic equestrian daughter, Jessica Springsteen. Bruce Springsteen, Willie Nelson and Emmylou Harris have added to the soundtrack, which features the song “Never Gonna Tame You” written by Diane Warren, whose list of musical accomplishments is vast. Platinum-selling artist Blanco Brown performs this Oscar-worthy original.

When you view THE MUSTANGS: AMERICA’S WILD HORSES --- and you must --- I dare you to watch the part about Operation Wild Horse without shedding a tear. This group in northern Illinois, run by veteran Jim Welch, uses rescued, trained mustangs to heal the souls of forgotten veterans from Vietnam and Iraq. The bond between these majestic animals and their humans is magical, as one vet attests as he tearfully thanks his horse for “giving back my life”.

Available in theaters and on TVOD

THE MUSTANGS: AMERICA’S WILD HORSES is an important documentary about the 130,000 wild mustangs living in the western U.S. The doc ultimately provides hope that the vast numbers of these animals can be controlled by limiting their reproduction. Otherwise, they could face extinction due to a growing lack of natural resources to support them.

From this film, co-directed by veteran documentarians Steven Latham and Conrad Stanley, we learn that there are currently 80,000 wild horses living on federally owned land. Why is this important? Because thanks to the efforts of a woman nicknamed Wild Horse Annie during the Nixon years, the president signed a law in 1971 making it illegal to kill wild horses on federal land. Annie was assisted in her appeals to Congress by young school children testifying to lawmakers --- it’s amazing footage and it’s all in the doc.

We also learn that a select group of concerned citizens help to control the birth rate of these animals by shooting them with anti-fertilization darts. This humane method of limiting reproduction is contrasted with the fact that way back in the 1920s, wild horses were slaughtered for their meat which made its way into dog food known as Ken-L-Ration. Wild horse expert David Philipps is interviewed extensively in this film and his insights are invaluable.

Without a doubt the most moving part of THE MUSTANGS: AMERICA’S WILD HORSES involves the influence these animals have on military veterans suffering from PTSD. One elderly gentleman, in particular, tearfully recounts how his horse partner Peanuts has changed his life. He no longer gets into fights and throws people off their bar stools. This relationship has converted his

anger --- stemming from his wartime years in Vietnam --- to a mindset of compassion and normal social intercourse.

The movie features music by The Boss himself. Bruce Springsteen’s soundtrack entitled “Chasin’ Wild Horses” is prevalent along with music from Emmylou Harris. Springsteen’s wife Patti and their Olympic equestrian daughter Jennifer, along with Robert Redford, are executive producers.

The documentary’s tag line is “The Fight For Freedom Has Begun”, and the filmmakers close things out beautifully with a song by Willie Nelson as the final credits roll.

Available in theaters and on TVOD